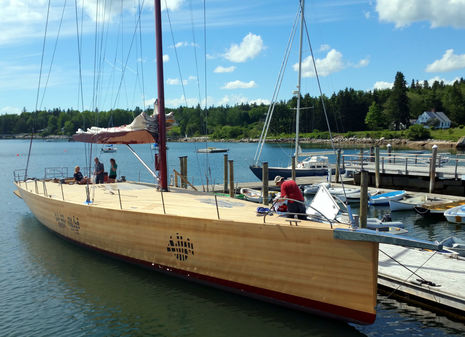 Maine is rightfully well known for boatbuilding but the craft was largely dormant when I got here in the early 70’s, and it stayed that way for quite a while. In the late 80’s many of the talented builders I worked with at WoodenBoat School were doing repairs and restorations. A commission for most anything larger than a sailing skiff was a big deal. But wow, did that change. It’s been wonderful to witness remarkably crafted custom vessels launch at yards like Lyman Morse (now also in Camden!), Rockport Marine, and Hodgdon Yachts to name a few. In fact, I only learned on June 20th that Brooklin Boat Yard — already masters at composite “Spirit of Tradition” beauties — was working on the extraordinary sloop above…

Meet Foggy, just launched on June 15th and still being finished out. What you can’t see in my photos is how the 74 foot yacht’s red carbon mast towers about 104 feet above the water while her 19,000 pound bulb keel draws nearly 12.5 feet. What’s obvious, though, is the huge foam-cored and cambered teak deck and the bright topsides layer of her Western Larch, Western Cedar, and carbon fiber composite hull. Not to mention the, um, random-seeming clusters of embedded glass in both those surfaces… 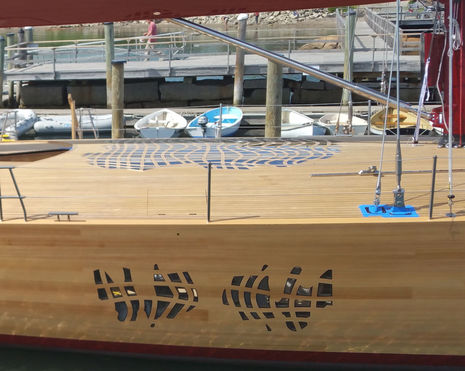 Indeed, Foggy has some 862 embedded chunks of carbon-reinforced glass forming two skylights and eight “daylights” (as apparently dubbed by the builders). Note how at least the top layer of the deck and topsides has often been bent or sawn to flow with the glass designs. And that, I suspect, is only one aspect of the boatbuilding challenges BBY encountered in this project. Are you beginning to think, as I do, that this is possibly the most unusual new sailboat anywhere? 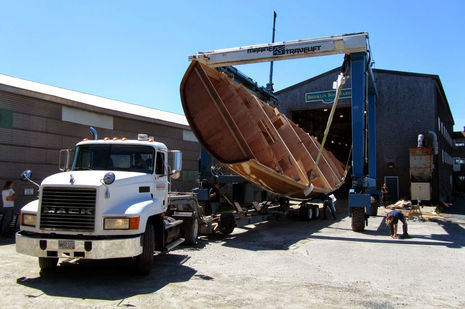 So how did a boatnut who only lives about 25 miles away (by water) not hear about this project? It’s not just that remarkable boatbuilding has become nearly commonplace around here; Foggy also seems veiled in secrecy. The otherwise informative Brooklin Boat Yard site doesn’t mention her, and the most detailed specifications I’ve found so far were in the local Ellsworth American‘s launch coverage, which also noted that BBY could not identify the owner. But it’s hard to keep secrets in the days of blogs, social media, and Google (not to mention the free press). Autoliterate, for instance, truly is a literate blog mostly about great old cars and trucks, but the Brooklin-based author also neatly captured the June 2014 flipping of Foggy’s hull (his photo above). 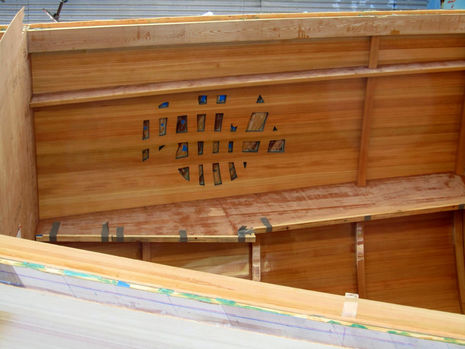 This is another autoliterate image from flipping day, but I flipped the photo so as to more easily imagine what the daylight will feel like on the finished yacht. I’m pretty sure that this area is what reporter Stephen Rappaport described as the “large master stateroom forward” so there’s also a large skylight above (as seen in the top photo). I’m picturing water dancing by the lower glass in feisty sailing conditions and light dancing around the cabin in all sorts of conditions. Then at night, when Foggy is lit on the inside, there will be that arty jack-o-lantern effect Rappaport mentioned in the Ellsworth paper. Note, too, how the hull is mostly a finished visible surface inside as well as out (the deck, too) so there are few places to hide cables, plumbing, etc. Challenging! 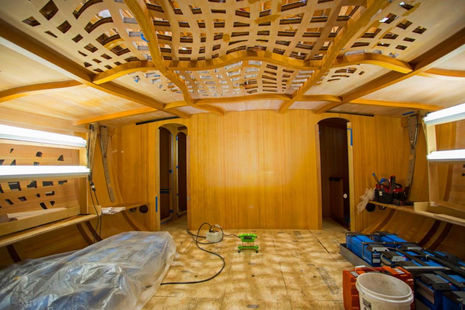 The light effects will be similar in the huge main cabin shown here under construction in a photo posted in the Trawler Forum, and I imagine they will be spectacular. And no wonder, given that the stellar architect Frank Gehry apparently designed the embedded glass details though German Frers is credited with the overall boat design. What’s less obvious is that Gehry was apparently designing spaces he himself hopes to sail in, but then again Foggy is also the name of the Benetau First 44.7 owned by Frank Owen Gehry (FOG) back in 2009 according to this sharp NYT piece on sailing architects. 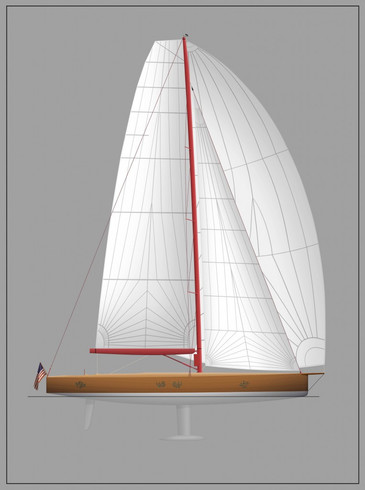 In that Times article Gehry said, “I love the sails. They make an architectural space. The Disney Hall is wing-in-wing.” I sure hope to see Foggy sailing in Maine this summer and many of you may also get to if she does indeed sail around via Panama to her home port of Playa Del Rey, CA (as Rappaport also reported). 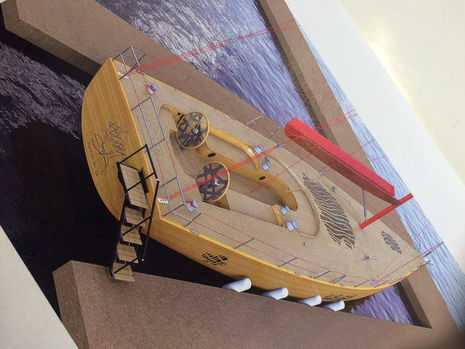 I’d also like to know more about her systems. According to MegaYacht News, those batteries seen in the main cabin photo above are part of Li-Ion 10 pack that will be charged by a 10kW gen set, and purportedly many of the sail controls are hydraulic. In the rendering above (thanks again, autoliterate) the clean deck theme is paramount… 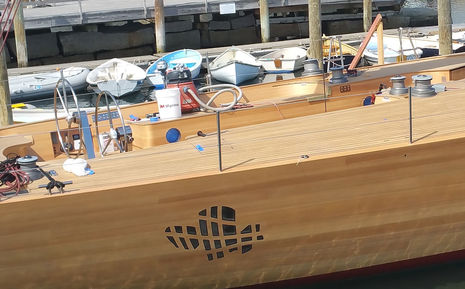 …and you can see some of the push button panels in this cockpit photo, as well as how many control lines are run somewhere under the deck. Incidentally, I took these photos from Gizmo during my annual one day WBS nav class job; I was more than willing to stop by Center Harbor to have a look once Jane Ahfeld and the students gushed about the launching. But I remain reluctant to bug the good folks at BBY for more info on the boat’s gear until it seems like they are free to discuss her. I did, though, come across this terrific video covering Foggy’s early construction. Steve White says the project took BBY’s (already stunning) craftsmanship “up to another notch” and who can doubt that? 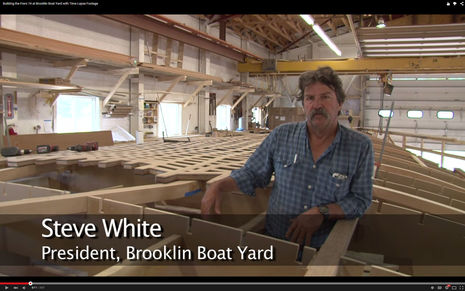 At any rate, it feels right to honor Maine boatbuilding on this Fourth of July celebration of our country’s independence, but of course I wish Panbo readers all across this land a great holiday. I assure you that Gizmo is showing the flag(s). 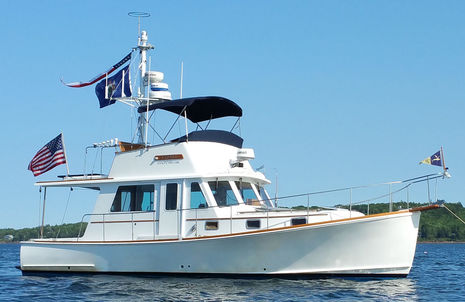 PS 8/6: Cool! Foggy’s very interesting electronics setup is becoming public. It was announced that those are three 10-inch SailMon MM104 instrument displays mounted on the mast and it looks like they were even able to match the font color to the spars. The announcement also revealed that local electronics hero Winsor “Kim” Baker did the project and he’s posted a lot of interesting photos in his 2015 Gallery. Besides SailMon, Foggy seems to have extensive systems from GOST, Maretron, and B&G, including Zeus2 MFDs that pop out of the teak deck. And check the deck plank runs below. Damn! I’m hoping to have a chat with Kim about how all this went together. 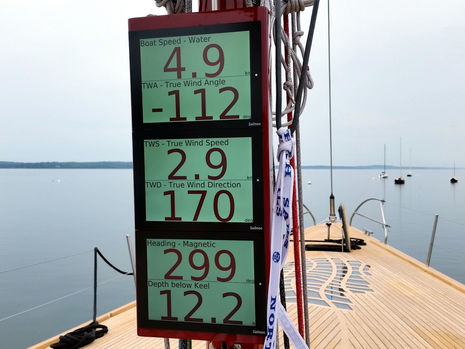