Future SAR gadgets, what are you hoping for? 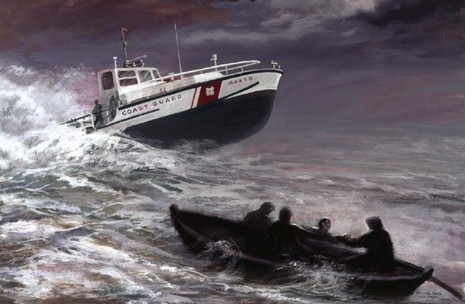 The illustration above and the term “SAR gadgets” are both borrowed from the final issue of On Scene, published until 2009 by the USCG Office of Search and Rescue (downloads here).  But no worries, On Scene is now a blog, and hence the times-they-are-a’changing illustration, which also serves well for a Panbo entry about evolving SAR gadgets.  On Monday, I’ll be speaking to a group of companies developing SAR communications equipment along with representatives of the agencies that regulate such gear and the ones like USCGSAR which answer the calls.  My task is to articulate what boaters may want to see in future SAR gadgets, and I’d like your help…

Some background:  Since it was mentioned here a year ago, the Iridium-instigated ProTECTS Alliance (as in “Promotion of Two-way Emergency Communication and Tracking Systems”), has grown membership impressively and has allied itself with the RTCM, which helps set standards for SAR gadgets and other gear.  Another acronym of note is SEND for Satellite Emergency Notification Device; SPOT was the first, a lot more are coming, and these folks are working to deliver what’s possible in an orderly fashion.  I’m addressing a ProTECTS section of a four-day RTCM meeting in Washington, DC, but I’m doing it by phone, with emailed-in slides.  So unfortunately I won’t get to attend other sessions, but then again the audience can’t throw things at me 😉
And my view of SAR gadgets does include some negatives.  For instance, I don’t think DSC VHF’s dreadfully low adoption rate is just because boaters weren’t educated enough, or because it took a long time for Rescue 21 to roll out.  DSC is too complicated, especially the potentially useful non-distress features that could help us get familiar with and confidant about the distress functions we can’t try.  It’s hard to tell if the complications are the fault of regulations or manufacturers — some of both I suspect — but a neat thing about the ProTECHS/RTCM alignment is the way private and public sectors are trying to work together to get things right.
So, besides avoiding the mistakes of DSC, what can I/we usefully communicate to the people working on the future of SAR gadgets?  Here are some of the points I’m thinking about:

*  Multipurpose devices can make sense. I think a big part of SPOT’s sales success is that it offers tracking and messaging as well as a distress function.  That makes it a more attractive value, and a gadget a user will get familiar with.  (Just watching how well a SPOT2 tracked my friends to Bermuda recently — see comments here — made me think that the Globalstar system is improving and that a distress call from that unit would almost certainly have gotten through.)

*  The single purpose SAR gadgets can make sense too.  PLBs and EPIRBs are already very well proven, as in the case of four French trimaran sailors just last week, but many of us like the ability to test our particular EPIRB/PLB all the way through the system, as now offered by ACR’s AquaLink View and 406Link service.  It seems that ACR had to set up its own ground stations to make this work, when it could have been built into the international system.

* The ideal Man Overboard alarming system doesn’t seem to exist yet. It should support rescue by the boat the person fell off, by nearby boats, and by SAR professionals.  AIS and DSC both seem interesting as they leverage existing technologies, but did RTCM overly regulate the latter by limiting alarm transmissions to specific MMSIs?

* Related: I see that RTCM has a Special Committee on GPS Equipped Hand Held VHF Radios even though such radios already exist, are valued as safety devices for MOB and other situations, and haven’t caused any problems I know of.  Please don’t write regulations that choke development in this area.  Please do evaluate the DSC regs to see if the functionality can be made simpler.

* I think there’s a somewhat untapped market for satellite SAR gadgets in coastal waters.  There are places just 15 miles by boat from where I live where island topography makes both cellular and VHF service uncertain.

* Finally, I get excited thinking about what’s possible with small, relatively inexpensive two way SBD modems like the Iridium 9602.  Whatever form the device takes, end-to-end system testing should be built in and easy.  And how about a fixed system like the SPOT HUG, which combines tracking, off vessel security and sensor monitoring, and distress calling but adds short two-way messaging, perhaps using local WiFi and apps phones/pads for the vessel end of the messaging?

Well, that’s where I’m at right now, and I’m obviously working on this at the last moment!  Any and all comments and further ideas are welcome.  The photo below, incidentally, is of the recent Emma Goldman rescue.  An EPIRB or PLB or maybe even a SPOT might have prevented what must have been 12 days of hell for the remaining crew, but it’s hard to say if any gadget could have helped with the fatality. 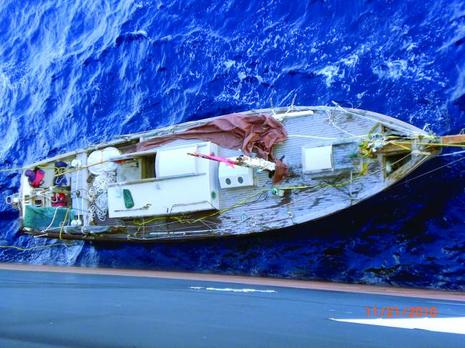