Humminbird Ion Series, GeoNav is way more than back 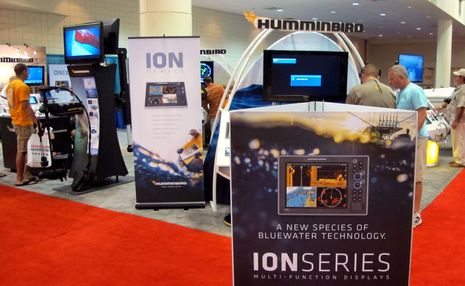 Johnson Outdoors really wants a piece of bluewater marine electronics. I learned a lot about the long, determined history of Johnson Family Enterprises when JO was trying to make GeoNav a major brand back in 2011. But while the GeoNav G12 MFDs I saw demoed had a lot of interesting features, even autorouting using either C-Map or Navionics charts, the competition from the existing Big Four brands is daunting. Plus, the economic timing was terrible and Johnson Outdoors pulled GeoNav’s plug, saying that they’d eventually try again under their successful freshwater Humminbird brand name. So, yes, the industrial design of the new Ion series looks like the old GeoNav G Series, but Ion really is “a new species of bluewater technology”… 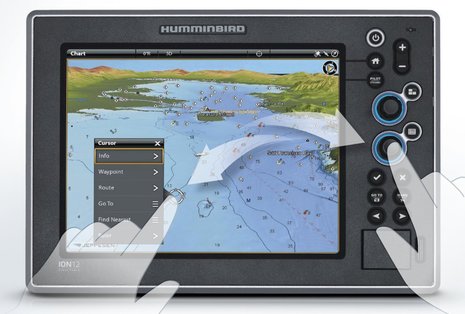 Ion’s software has been completely rewritten since GeoNav and the hardware only looks the same. For instance, the Ion has a multitouch screen and the “Cross Touch” interface means that every single command can be done either on the screen or with the keys, dial and joystick. I was particularly impressed with all the touch gestures I saw on a short demo trip during the Fort Lauderdale boat show. For instance, an upward two-finger-swipe takes you to the home page while horizontal ones page through your favorite screens, and pinch-to-zoom works on both charts and sonar imagery. 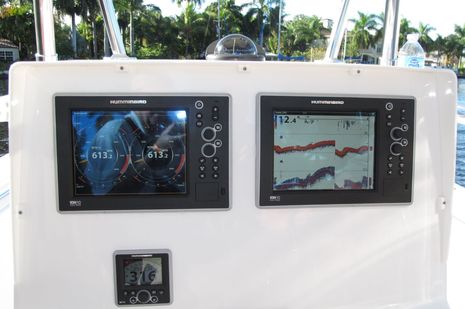 The Ion 10-inch MFDs we saw in action weren’t finished but what did work looked good. Naturally, Humminbird has put an emphasis on fishfinding, and there are also three new sonar modules that run up to an SM3000 that can provide side and down imaging, plus regular and CHIRP fishfinding, plus boat speed and water temperature all over one Ethernet cable. And note that the demo did include NMEA 2000 engine data driving virtual screen gauges… 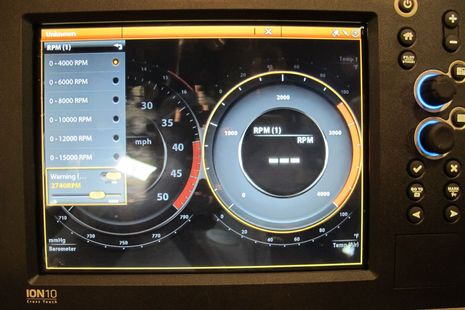 When I recently got N2K engine data on Gizmo, I learned that being able to customize gauge scales and warning points is important to their usefulness and thus, I liked what I saw when fooling with an Ion10 in the Humminbird booth. Personally, I’d appreciate even lower max RPM choices, but these ranges would certainly work on a lot of fishing boats. And look how easy and elegant they’ve made even the set-up portions of that screen. I saw lots of pleasing detail like that in the Ion interface. 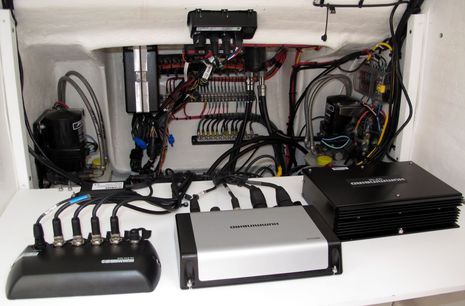 The Ion hardware also looked well made. I’m not sure I’ve ever seen a marine Ethernet switch with metal connectors, for instance, and they may even be the standard d-coded M12 type that’s being proposed for use with NMEA OneNet. Besides for the sonar modules, radar and other Ion MFDs, Ethernet can be used with 4 IP cameras as I understand the system design so far. Also seen in this photo is the course computer for the SC 100 autopilot that pairs with the new bluewater electronics. 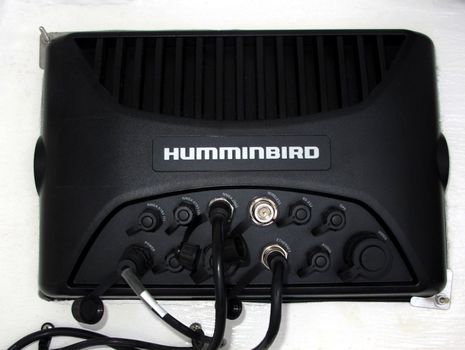 Ion is obviously serious about networking, and the most unique port on its backside is an N connector for an external 11dB WiFi antenna that will be an available accessory. Humminbird hasn’t mentioned apps that can control or view the Ion screen, but it does have its own browser. The Standard Horizon CPN is the only other MFD I know of with a built-in browser — I’m currently testing and liking one, in fact — but you can’t use it and the CPN navigation functions at the same time. Humminbird sees users checking weather and email even underway, and it seemed like the product manager had lots more ideas of what could be done eventually with an MFD Internet connection.

The Fort Lauderdale press release also announced 8 and 10-inch Onix bluewater displays that share many features with the Ion MFDs and include built-in sonar but seem to lack the Ion’s full-on networking, IP cameras and browser. There is more detail about Onix than Ion on the Humminbird site right now, but note that the available operating manual PDF covers both. I’m also headed to Eufala, Alabama, in a couple of weeks to tour what it is purportedly the only MFD manufacturing plant in the USA and hopefully, to go fishing with some of this gear. I think the screen below shows Onix at work on a local lake, but it could be an Ion and the user could have been imaging saltwater fish with either, even CHIRPing down to 10,000 feet if using the SM3000. Note that Ion and Onix still support both C-Map and Navionics like GeoNav did, but now also support Humminbird’s own mapping and even AutoChart user-generated mapping.
It’s difficult to predict whether this Humminbird bluewater gear can make much headway — the competition is even stiffer these days — but Johnson Outdoors is certainly determined. 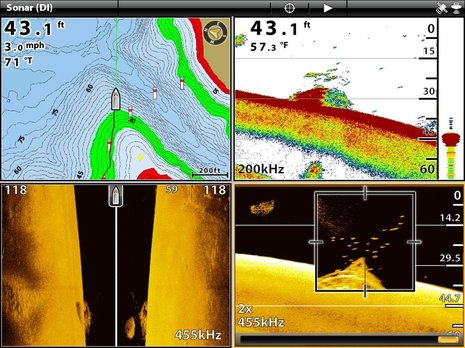