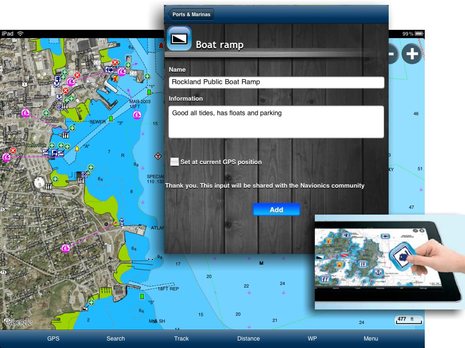 Wasn’t it telling that three DAME awards went to iPad apps yesterday (even though only two were entered)?  I can’t find the full award text online yet, but the judges explained their Marine Related Software choice of Navionics Marine: Mediterranean HD thusly: “This system’s ease of use was better than any the Jury had seen to date. With fingertip control provided by the iPad it was extremely easy and intuitive to manipulate the charts and establish routes and waypoints. Moving from screen to screen, updating charts, and zooming in on a landmark was expected to be very simple even on a moving boat.” It’s a bummer that all regions of Mobile 5.0 aren’t out yet, but testing Beta versions for Canada, the Caribbean, and U.S. East leads me to concur with the judges, particularly in regard to the updating charts.  Creating user generated data — the major feature of 5.0, as emphasized in the Navionics graphic inset above — is so much easier on a big screen with a big keyboard…

And while the DAME judges weren’t obliged to award any Special Certificates, “The Innovation certificate of excellence was given to two products that both use the iPad:  the Palladium Technologies SiMON2 yacht control software and the Navionics Marine: Mediterranean HD chart system. Both of these products utilized the
iPad in ways never before seen.”  Plus I’ll bet there are iPads in lots of METS
booths, as there were at the Fort Lauderdale show. They’re perfect for demonstrating new Web services like SPOT HUG, or just showing off install photos like the guys at Electronics Unlimited were doing (they’re also using FileApp Pro to load their iPads with product brochures and manuals).  And below is a screen that’s no doubt wowing folks at the Maretron/Moritz booth, like it wows me.
That’s not just the demo version of N2KView mobile monitoring and control software that anyone can download from iTunes (or the Android Market), which is pretty neat in itself.  Instead, it’s a live demo installation on the big yacht Sandrine, and thus, thanks to the loan of a user name and password, my iPad in Maine is online with Sandrine in Florida.  One feature of N2KView for app phones and pads is that you build the desired setup on the PC version, so all I had to do was hit the “Download Config File” button to get this and many other screens.  It’s pretty amazing how quickly those lights in Sandrine’s engine room respond to my iPad taps, and at one point this morning I was taking turns on them with the booth guys in Amsterdam.  The live demo says a lot about how NMEA 2000, wireless connectivity, and mobile apps things are all coming together, and I’m pleased to add that Maretron has slew of about-to-be-announced products that will broaden N2KView’s monitoring abilities and its appeal to vessels smaller than Sandrine. 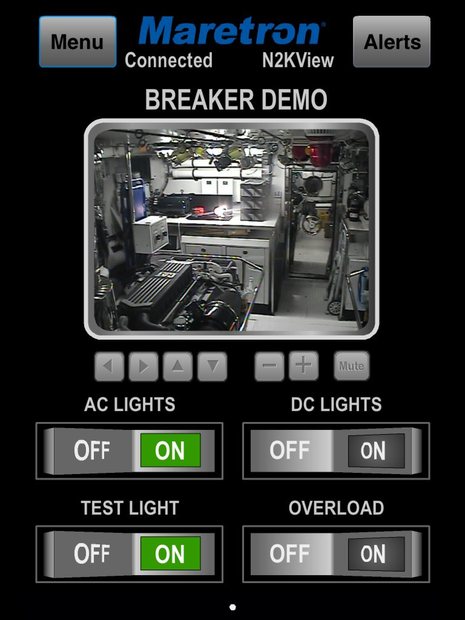