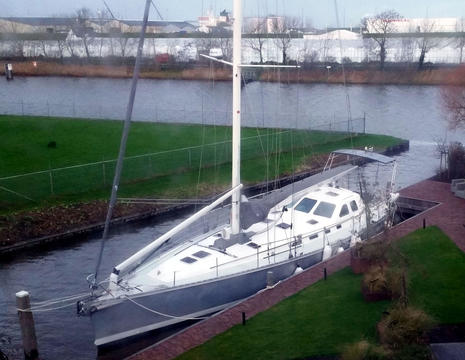 A memorable moment of 2015 was waking up in Kees Verruijt’s attic guestroom in Harlingen, Netherlands. If my lens were wider, you’d see the thick thatch capping his sturdy brick home. And if I’d waited a bit, the photo might include one of the family-owned-and-operated cargo vessels that often motor by enroute to or from the Wadden Sea. What you can see clearly, though, is Kees’s own dream boat Merrimac, which I would soon tour. I’d been following this boat project for years, knew that it motivated Kees’s valuable CANboat work, and given that CANboat helped birth Signal K, I figure that Merrimac may earn a special spot in marine electronics history… 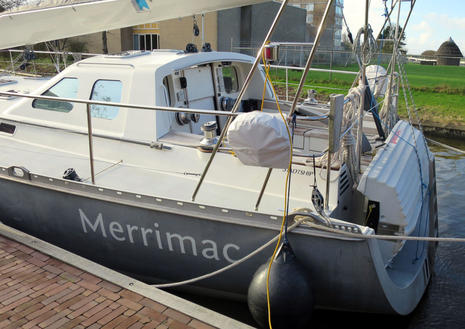 Before the electronics, though, let’s have a look at an impressive cruising vessel. Merrimac is a custom aluminum Stadtship 56, and quite an upgrade for Kees and his family, who once cruised a boat he could barely sit up in. One detail he’s proud of is how the open stern can accommodate and provide good access to a hard tender. Another that especially impressed me is that leafed companionway hatch system, which easily stows down into a pocket or can be set at any height. Note, too, the solid rails extending well forward and also the harness track running along the cabin, thus allowing a crew person to stay continuously clipped in all the way to the foredeck. More interesting detail is included in the builder’s Merrimac profile along with some good sailing photos. 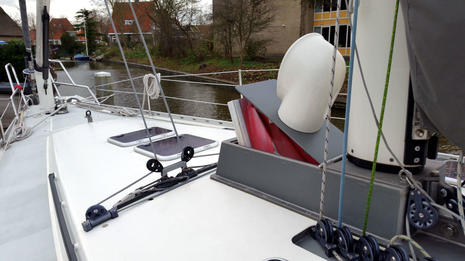 Besides looking lovely under sail, that album also shows how Merrimac can lift her keel and rudders to sit securely on a sand flat (or low in a boatyard). In fact, the keel’s run is so great that you’re seeing the top of it popping out of that ventilator box just ahead of the mast. The big sloop can go from a draft of about 10 feet to about 3, and also has 5,500 pounds of water ballast to help her go. Enjoy videos of Merrimac comfortably near reaching in 20+ knots or running down the Swedish coast on the boat’s YouTube channel. 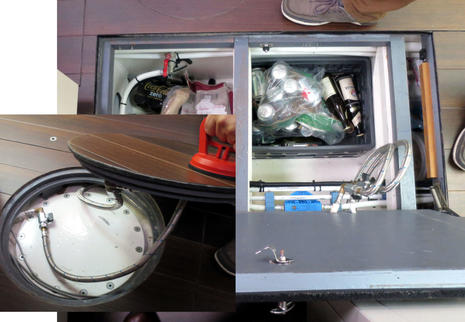 This photo collage hints at Merrimac’s elegant and functional white-walled and wood-soled interior, but what I was mainly trying to illustrate is the boat’s unusual hydronic underfloor heating system (supplier Yacht Floor Heating B.V. put up an install video). The plumbing even extends to that hatch over the storage area and the little circular tank inspection hatch. Putting a similar system in my own home was one of the best improvements I ever made — I’m comfortably barefoot as I write, though it’s 14°F outside — and what a welcome luxury it would be when cruising northern climes. But once you get into it, you don’t want to step on cold spots. 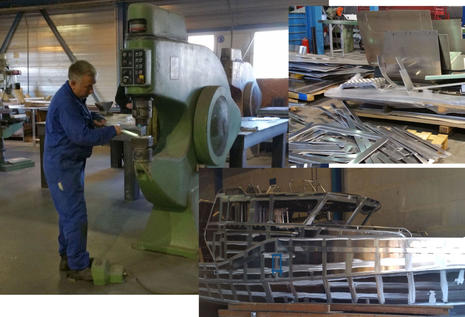 Later that day, Kees took me to visit the nearby KM Yachtbuilders operation where Merrimac was launched in 2010. Wow! The aluminum parts may be precisely and smoothly cut by a subcontractor with waterjet CNC machines, but it takes a craftsman with a great eye (and a sure foot) to glance at the plans and make the proper bends. KM builds many interesting sailing yacht designs and I spotted a powerboat or two in the busy shops. 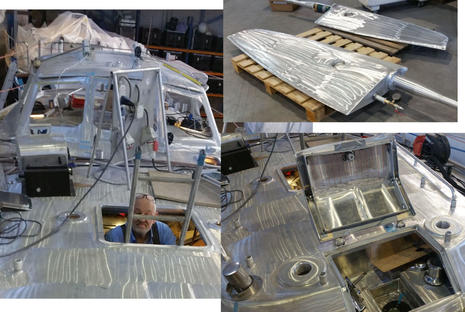 While I’m no expert on aluminum boatbuilding, the work I saw at KM and onboard Merrimac seems exceptional. In fact, I’ve become quite a fan of Dutch practicality and craftsmanship (and most everything else) over the years, and of course they know a lot about boats. Excuse the sidetrack, but I highly recommend the writings of Russell Shorto for a big picture view of Dutch history and culture, first focused on early Manhattan in The Island at the Center of the World — which I used years ago in writing up my own little history (PDF) — and then the whole nation in Amsterdam: A History of the World’s Most Liberal City. 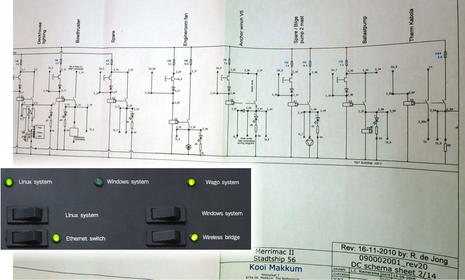 Now let’s discuss CANboat. When Kees started his blog Yacht Electronics back in 2009, you can see him contemplating many systems that would eventually go into Merrimac, particularly an ambitious DIY switching and monitoring scheme. And when he wrote that it was a “new playground for exercising some skills that I haven’t used for 25 odd years,” he was humbly leaving out his serious tech background as a co-founder of Redwood Software whose biographies always seem to emphasize his belief in open source solutions. Thus many of his early YE entries are about Packetlogger, the program he wrote to reverse engineer NMEA 2000 so he could access the PGN details the way he wanted. And thus Merrimac has a breaker panel with unusual trouble lights like Linux and Windows Systems, not to mention an owner-designed Wago PLC system. 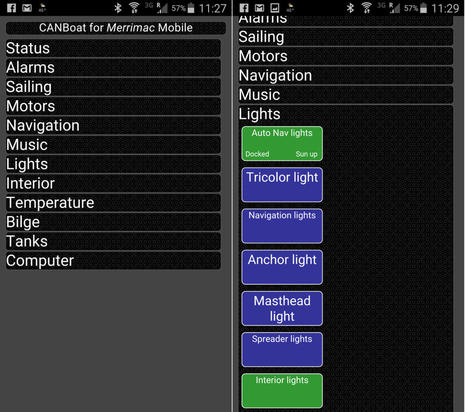 Kees briefly considered commercializing his system, but Packetlogger was eventually renamed CANboat and donated to the open source DIY marine community. I saw the Merrimac implementation running beautifully in Harlingen – I’d even say simple and sturdy, Dutch style. In fact, that’s my phone’s Chrome browser running it above — all it took was a URL and a password — and Kees had opened monitoring pages on his iPad while we were having breakfast in his house. You can see examples of those pages here, along with a good explanation of the overall system design. 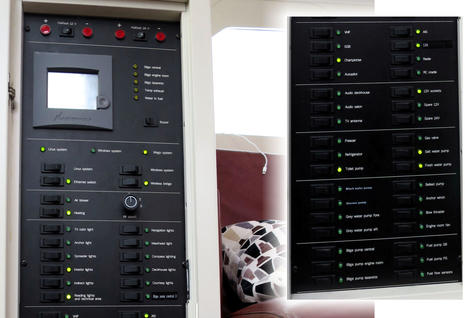 I especially liked how I could switch something on or off on my phone and the change would immediately show up on Merrimac’s panel, or vice versa, though the panel can function fine on its own. And at least to my inexpert eye, the software design and server specs behind the browser pages seem quite modern though they’re more than five years old now. But it certainly wasn’t easy putting it all together then, and wouldn’t be today, as Kees acknowledges with a grin.

Now, however, we’re about to see Signal K in action. Kees is a member of the core SK team — all of whose boats would likely be interesting to tour — and CANboat an important SK development tool, at least until NMEA encouraged its regularly licensed NMEA 2000 developers to work with the new protocol. When I asked Kees to confirm my understanding that Signal K will make a system like Merrimac’s much easier for a techy boater or a company to build, he said “absolutely yes” with many grins. Cool boat, cool guy. 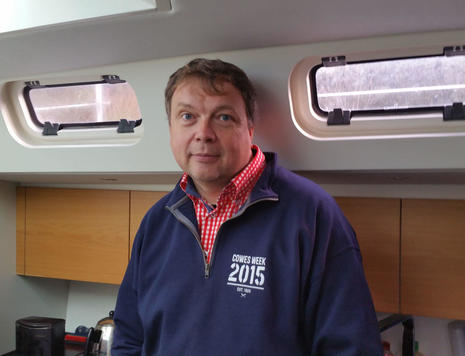