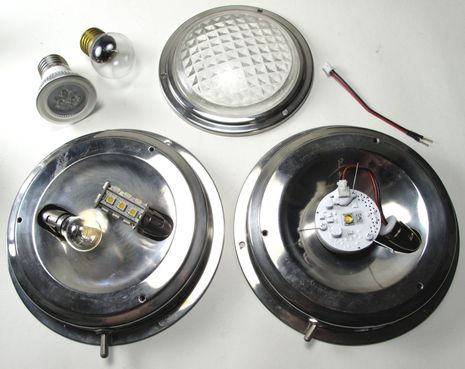 Switching Gizmo’s interior lighting to LEDs seems like a no-brainer, especially given the horridly inefficient incandescent lighting she came with. For instance, I ran that either/or dual dome light comparison at lower left all last season and it was hard to tell the difference between the light outputs of the two bulbs, except that the $30 Imtra “Tower” LED replacement bulb is slightly warmer in color and draws only about 2 Watts (.23 amps at 12.4v) while the freaking filament bulb draws 15! But though there are more and more choices in replacement bulbs and fixtures — with prices down and LED light output up — there are still numerous issues to consider and I don’t think that boats like mine have seen the perfect LED choice yet…

In the issues department is the Dr. LED Mars Dome Light LED Conversion Kit I just purchased. At $24 on sale, it seemed like an easy solution for some of Gizmo’s less critical dome lights, where 60 lumens of warm white (3200 K) at less than a quarter amp would be OK. The kit also has the internal voltage control — 10 to 28 volts — that seems characteristic of better LEDs. But I didn’t anticipate how that single extra bright pinpoint LED would interact with the diamond-pattern glass lens on my particular dome lights; the net effect is like disco lighting! I’ll find some obscure spot for this LED and will still be glad for the power saving every time I use it, but the point is that you have to consider not only LED light output and color but also how the light is distributed.
Now this single LED “bulb” design may be the same used in the (sealed) Mars Red/White Dome fixture I’ve been using for two seasons, but it has a very different lens design that distributes the light fine and I’m fairly happy with it (though do note that it’s made of Chrome plated ABS plastic with a Polycarbonate lens, not metal and glass, but still costs $98). Dr. LED is also the source of that hard-to-find $40 Edison screw base reading lamp replacement bulb seen top left in the upper photo, which is ruggedly built and works at least as well as the incandescent original, while drawing 3 Watts instead of 13. (Incidentally, Dr. LED recently became a Panbo Classifieds advertiser, which is still completely free for a year’s run, a deal every every marine electronics business should consider!) 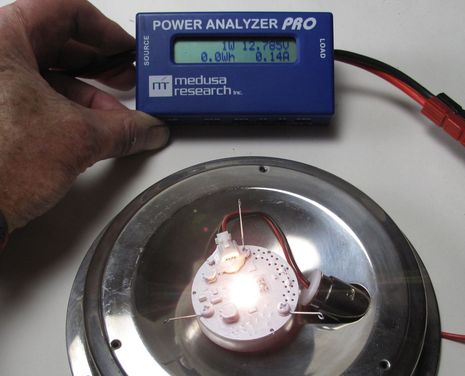 Other outlets where I’ve found good LED replacement bulbs and fixtures are Sailor Sam’s and Marine Beam — which now has fluorescent tube substitutes (hurray!) — and I’m sure there are many others (your favorites?). But why settle for just a replacement of your current boat lighting when it seems quite possible to have well balanced LED lighting that’s very bright when you need it while still dimming down to almost invisible? Newer and bigger boats with their multiple recessed fixtures and ganged dimming (good selection at Yachtlights) are already going in that direction but I’ve yet to find an easily sourced switched fixture that does what’s possible.
Gizmo’s many dome lights are particularly vexing as the wiring is buried in bunged cherry trim (as shown here) so adding a dimming circuit is near impossible, but I think a lot of boaters would be happy with an individually switched and dimming LED fixture if the performance/value equation was right. I’m even experimenting with fashioning my own. What you see below is a wooden lamp base sourced from a crafts outlet which I’ve hollowed out further to accomodate a LIET3 Series fixture and a little control for its built-in 1-10v dimming also supplied by the good folks at OceanLED (Liet’s corporate sibling). This setup tested very well in my dark lab against the other bulbs discussed, particularly the 3 Watt reading light with its similar specs.
The LIET3 produced just as much light toward the center of its beam but much more to the sides while drawing slightly less juice (LED Watts usage are not always directly proportional to lumens, which is why I like to see lumen specs). It also dimmed smoothly all the way to a hint of light that had my meter flickering between a .01 and .00 amp draw. Once I get the base painted white to match Gizmo’s overhead, this assemblage will light the salon table nicely (though I wish I had the LIET6 with twice the lumens for those times when I need task lighting there). But LIET seems to be headed more toward (beautiful) commercial lighting since I first checked out their interesting technology, and were never much interested in producing switched fixtures anyway… 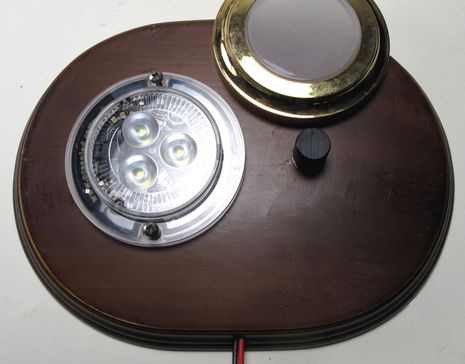 But I did find these German- built prebit d2 LED fixtures on the Web and they sound great. Consider nine 1 watt LEDs producing 670 warm white lumens — more than three times the 200 lumens claimed by the LIET3 — with infinite dimming via an internal soft switch and secondary red lighting if you want it. However, I can’t find any source for these fixtures online, and they may be way too expensive anyway. What’s your concept of the perfect LED boat fixture and/or what are you finding useful? 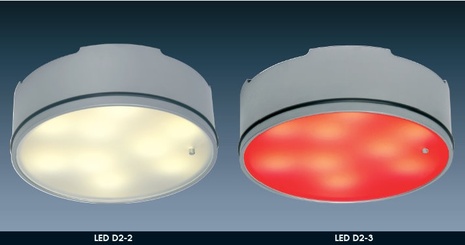