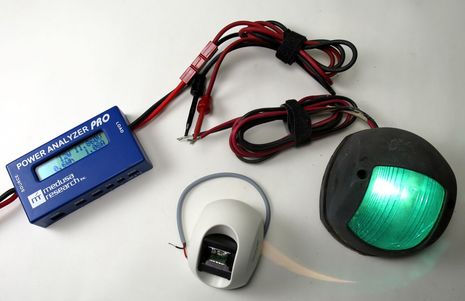 As much as I value LED lighting, I was hesitant to change Gizmo’s navigation light fixtures. Why spend the (significant) money and refit time to save power when a big alternator is always running at the same time as the running lights? But I had already removed the boat’s side light boards for refinishing last fall, and then I noticed that the cost of at least some LED nav lights has become quite reasonable. It was nearly an impulse buy when I put a pair of Aqua Signal Series 33 side lights in my Defender cart at $45 each. I’m not totally satisfied with the purchase, but I do expect the Aqua Signals to be a vast improvement over those old incandescent fixtures… 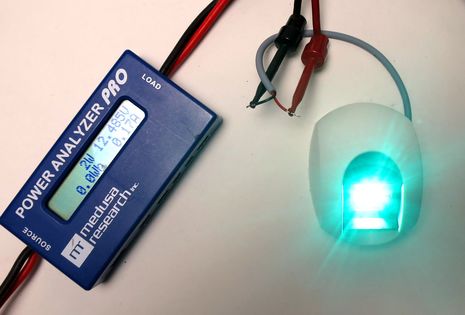 My power testing shows that the old incandescent Perko fixture using 12 watts, or over an amp of 12v current, while the LED Aqua Signal comes in at about 2 watts or 0.17 amps, even though it’s approved to meet the 2 nautical mile visibility and other requirements by about every authority possible (BSH, USCG, IMO COLREG, GL, RINA, ABYC A-16, and CE). Of course, that’s why LED running lights are a no-brainer for sailboats. Possibly more important for powerboaters is the fact that these and other LED fixtures are completely sealed and claim a lifetime starting at 20,000 hours. 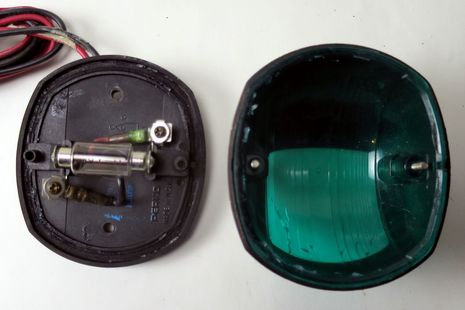 A look inside the old running light reveals a typical but unreliable incandescent design. First there’s the intrinsically delicate bulb whose filament must heat way up to work, and then there’s the spring clips that have to deal with the heat and current in often damp atmospheric conditions. No wonder they often fail. This is also why LED bulb replacements are often a bad idea. You can get a Dr. LED festoon bulb that fits this fixture, but you’ll still have the clip connection to worry about, and you also won’t get maximum power efficiency (and maybe not 2nm visibility) because you’re putting an entirely different lighting technology into a fixture it wasn’t designed for. Besides, the replacement bulb costs almost as much as the entire sealed and purpose-built Aqua Signal 33 fixture! (I’ve also learned that LED interior fixtures are often a much better choice than bulb replacements.) 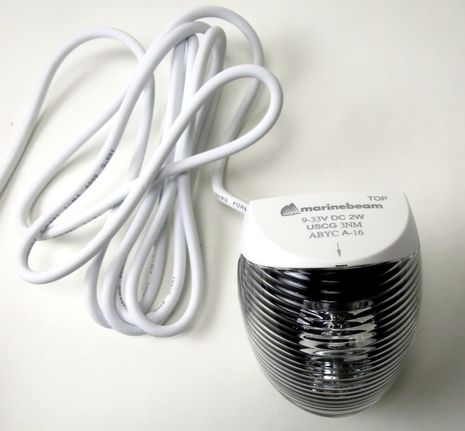 But then I discovered Marinebeam’s Navlight series of LED running lights. The stern light above did cost $89, as did the steaming light I also bought, but they’re better than the Aqua Signal 33 design in at least two ways. An obvious difference is that good quality 8-foot 18AWG power lead, as compared to the pathetic 7-inch lead on the Aqua Signal fixture (and hat’s off to West Marine for noting that specification when most other seller’s don’t). I’ll be cursing Aqua Signal when I have to fit the splice to that little lead into a routed pocket on the back of Gizmo’s light boards, and I also had a devil of a time getting the white trim piece off without damaging it. 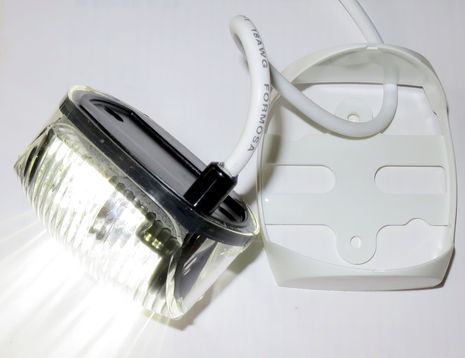 Meanwhile, the Marinebeam casing snaps on and off, no problem, and the 3nm rated stern light looked very bright in my lab while drawing just 0.11 amps of power. So far, I’m really impressed with the Marinebeam design and look forward to using them. In fact, I intend to run Gizmo’s new set of LED nav lights even in daylight; I’ve always thought that had some safety value, particularly in fog, but was somewhat hesitant due to the short lifetime of those now silly-seeming filament bulbs.

Yes, it was a bit of a shopping spree, as a Navisafe 2nm Tricolor Navi Light seemed hard to pass up at Marinebeam discount. In the flesh the Navi Light seems as well designed and made as the company marketing suggests. Tapping the button let’s you fire up all three sectors, or just any single one, or just the red and green sidelights. I’ll probably use the latter mode on the bow of my rowing tender, leaving the magnetic plate fastened in place where it will automatically align the otherwise portable light, or maybe I’ll fashion a pole so I can use all three lights at once without blinding myself. In either case, it will be a vast improvement over waving a flashlight around (even if that’s legal). Marinebeam also offers a kit for legally lighting a small power boat, and I might add the adjustable strap that comes with a Navi Light means you could also wear it on your head…maybe at a beach party?