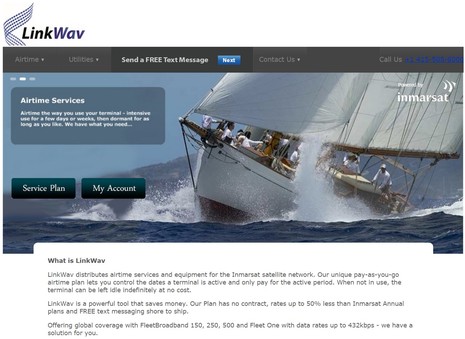 Ho hum, just another sat coms service provider? No way! I think that LinkWav has pulled off something quite special in the daunting world of expensive marine satellite voice minutes and data megabytes. The company figured out how to offer a simple Inmarsat FleetBroadband service plan with decent rates and nearly realtime cost/budget monitoring, but without an oppressive contract. In fact, LinkWav is especially designed for the ocean racers, cruisers and small commercial operators who only need satellite communications now and then, sometimes with many months in between. The cherry on top is the high quality of the LinkWav team… 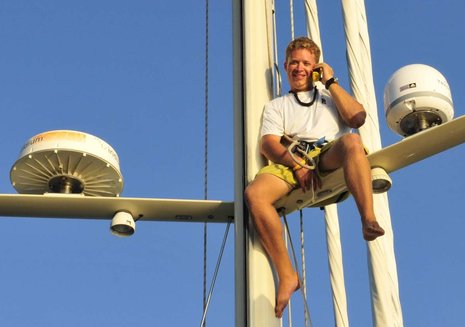 First, let’s review some frustrating FleetBroadband history. When the service went live in 2007, even the smallest 15-inch FB250 antenna offered significantly faster, better global service than had ever been available with hardware that small. Then in 2009 along came the $6,000 11-inch FB150, which seemed really right for some medium-size yachts. In fact, Panbo friend Gram Schweikert installed that KVH FB150 above (alongside an Iridium OpenPort) and then tested both from Newport to NZ. As explained in that last entry and further here, Gram and his family found the FleetBroadband system easy, reliable and useful during their long cruise, and service options, like the ability to buy a year of minutes up front and use them any time during the year, made it reasonably affordable.

But then, in 2011 some of the cruiser-friendly service options went away and in 2012 Inmarsat base rates for light and/or intermittent users seemed to go up again. We later learned that Inmarsat was under pressures that had little to do with their smaller yacht users, but I’m not sure that made the affected boaters feel better about the results. Some installer/dealers who had equipped customers with FleetBroadband were also upset and the one I quoted in 2011, saying that the service changes “will completely orphan the recreational community,” was particularly perturbed. But guess what? The guy who cared a lot about his customers is the guy behind LinkWav. 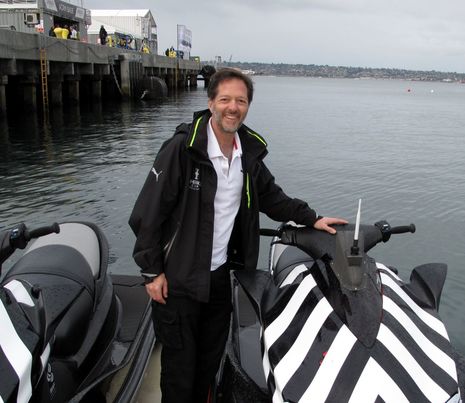 For many years Eric Steinberg has run Farallon Electronics, where he’s specialized in Grand Prix racing yacht systems and has also developed products like the IstarGPS. I finally met him in San Diego (above), where he was responsible for all the conventional and very unconventional electronics aboard the dozens of the Americas Cup 34 support vessels (and here) that went around the world helping to pull off a whole new level of race management and live video coverage. I caught up with Eric during the actual AC72 racing in San Francisco, and by then was even more impressed with how he and the rest of Stan Honey’s team had employed so much new technology with so few hitches. He didn’t mention LinkWav then, but according to the company’s modest About page, the idea was germinating. In fact, the person responsible for the complex database that makes LinkWav work is Chris Milnes, whose father Ken is Stan Honey’s longtime tech partner. I presume that, like Eric, he, too, is familiar with work in high performance environments where reliability is key. 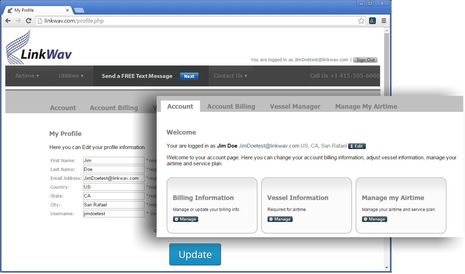 In that spirit, LinkWav has already been tested on about a dozen boats for over a year, and I know that Steinberg and Milnes were perfectionists about the LinkWav site before they made it public a few weeks ago – which is why I don’t need to say much about it. I think that the single pay-as-you-go service plan is easy to understand, even though there’s nothing else like it. The magic seems to be behind the scenes in how LinkWav interfaces with Inmarsat’s pre-paid SIM card billing system (and Inmarsat is purportedly fine with it). The sign-up system looks very straightforward and requires no financial commitment… 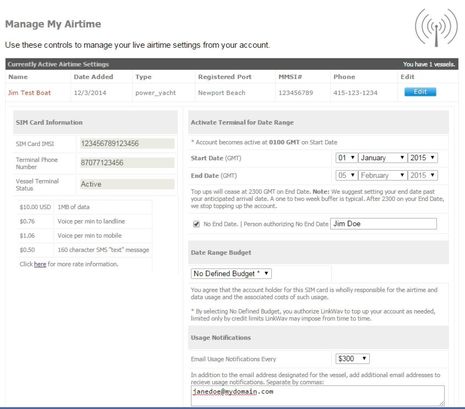 …and a customer’s Air Management controls also seem easy, though powerful. The concept here is that you can buy all the airtime you want easily, but also stop whenever you want, and if you use the management tools carefully, you can spend close to zero up to 8 months of no use. Below is an actual LinkWav Usage Status email sent to a customer somewhere on the planet earlier this week. Eric doesn’t think that any other service provider offers this amount of detail, and he’s hoping similar database programming can offer special help to users of the harshly regionalized Fleet One service when LinkWav adds support for it.

Incidentally, some FB150 hardware systems are now under $5,000 ,and I must say that sometimes even a cheap coastal cruiser like me wonders if all the time I spend messing with cell and WiFi connections is worth it. If I ever did want solid satellite communications, what could beat having LinkWav and the guys who run it between Inmarsat and my wallet? 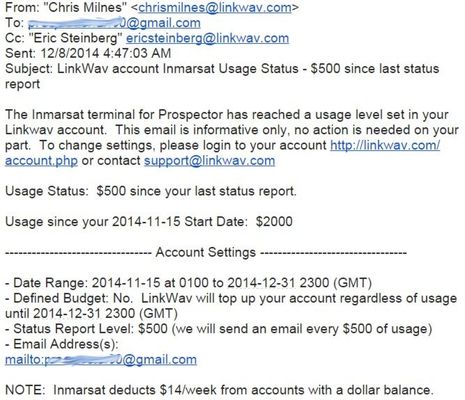