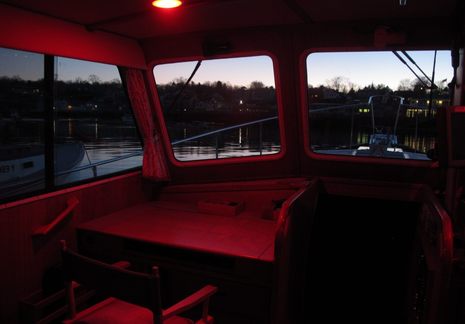 Once I’d bench tested “ChartTable21” in 2011 — a project Panbo readers helped design — I planned  to soon post a followup entry showing and discussing the finished install. Well, now I can tell you that this sometimes invisible computer system not only works well but has survived more than three boat seasons without problems. The photo above, worth a click to see larger, shows how Gizmo’s original varnished cherry chart table can look nearly as lovely as designed and built. Sometimes you’d even see paper charts there, and obviously the sight lines through the big windows remain unobstructed. But when it’s time to “go to the office” or zone out with Netflix, or do extensive nav planning, the scene transforms… 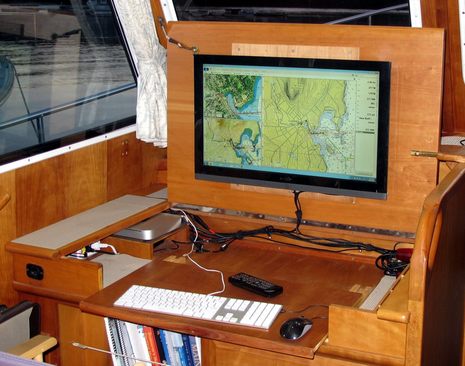 Ta-da!  My 3-year-old idea of a 21st century chart table was an Apple Mac mini driving a 26-inch Vizio LED-backlit monitor (and HD TV). It’s turned out to be excellent for browsing gigabytes of electronic charts as well as supporting much work and play. Note how I replaced most of what used to be the front of the paper chart locker with a sliding keyboard shelf (using hardwood dovetail slides from Rockler). The “desk” ergonomics are pretty good, and I only need to fool with curtains when a low sun targets the screen itself.
During the first season I experimented with different power arrangements (detailed in comments to the bench test entry), settling on a little APC inverter to feed the Mac mini its typical 20 Watts and an iGo 12v to 19v (laptop) DC converter to supply the screen with the 50 Watts it uses at maximum brightness. That beat using the boat’s big Xantrex inverter, especially when I shut down the Mac and just used the Vizio’s built-in WiFi and apps to stream videos. But once I upgraded Gizmo to a more efficient Victron Multi inverter, it became simpler to run the system on AC. I can’t measure what the Victron is using, but it seems reasonable, and I’ve learned it can switch back and forth from shore power without the computer even noticing, which is impressive. 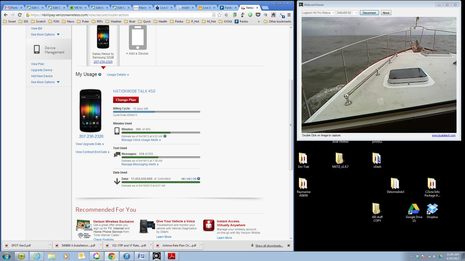 I swear on a stack of Chapman’s that I almost never sit at Chart Table 21 and use a turned-around Logitech C930 webcam to keep an eye out while underway, but the screen above shows what that might look like. You can also see that CT21 is online underway via Gizmo’s WiFi router and high power Rogue Wave WiFi system, though the latter is getting Internet from my Verizon 4G phone’s hotspot feature instead of a shore access point. (I can get online direct from Mac WiFi to phone, but the complicated sounding way is actually easier over the long term because all of the boat’s WiFi capable screens usually stay logged on to “M/V Gizmo”). The screen also shows that I’d already used over 17 gigabytes of Verizon Internet just half way through last April’s billing cycle, a happy situation discussed here.
When I do use Chart Table 21 as an underway navigation tool, I’m generally standing up where I can see over the screen. Nobeltec TimeZero, particularly the Trident version with Furuno radar involved, looks almost dangerously spectacular when running on this system. But the fact is I rarely use the Mac this way and when underway at night I almost invariably fold the screen down for a better view outside and good night vision. Adjusting the Vizio to minimum brightness combined with nav program night colors is still not dim enough for my taste and this monitor’s location. I’ve seen navigators use red gel sheets to further dim household screens like this, but I’ve got alternatives nearby.
The Mac mini set up — which is running Windows 7, incidentally — is handy for all sorts of electronics work, especially as its USB ports can be connected to NMEA 2000 gateways from Maretron, Actisense, and BEP/Simrad. And it’s fantastic for planning with the Rose Point Coastal Explorer charting software seen on the Vizio screen above. I’m a long time fan of CE’s ability to present all sorts of weather and cruising information and its route making tools. (I sure wish I could send those routes to MFDs via one of the bridges, but so far that’s either not possible or I haven’t figured it out, so I’m using SD export/import cards instead.)  I also appreciate CE’s automatic NOAA chart updating and its support of other chart type like C-Map and NV-Charts. A recent free update to Coastal Explorer 2011 can nicely fill in the land areas of ‘hybrid’ NOAA vector charts with medium-resolution web topos or satellite photos, or even raster charts, as illustrated below. CE, TimeZero, and Chart Table 21 are all worthy of longer testing. 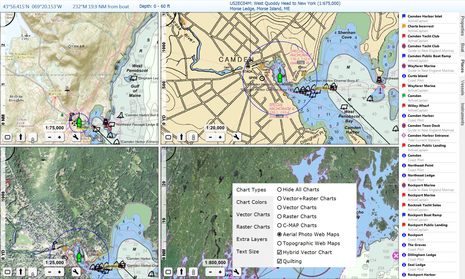