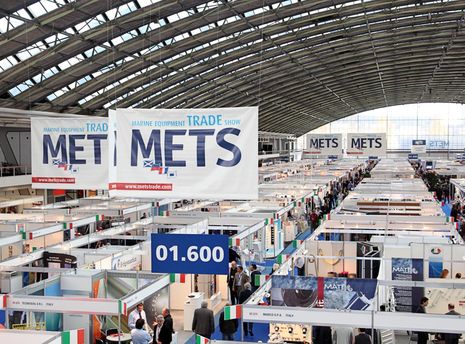 Today I {Kees Verruijt} did a one day tour of the 2011 Marine Equipment Trade Show in Amsterdam. I knew before I started that it would be a hopeless task to cover everything so this is just my own take on things… This year is the first year that Ben had introduced me as the official Panbo representative and I was surprised at how much ‘clout’ I was carrying. This turned out to be both positive (people take you seriously) and a negative — some manufacturers clearly stated that some things were under embargo and they did not care for publication just yet…

Today I {Kees Verrujit} did a one day tour of the 2011 Marine Equipment Trade Show in Amsterdam. I knew before I started that it would be a hopeless task to cover everything so this is just my own take on things… This year is the first year that Ben had introduced me as the official Panbo representative and I was surprised at how much ‘clout’ I was carrying. This turned out to be both positive (people take you seriously) and a negative — some manufacturers clearly stated that some things were under embargo and they did not care for publication just yet…

This year I saw no radical new developments compared to last year, when I reported that AIS and wireless access via tablets and smartphones were the new ideas and that NMEA 2000 was picking up speed. This year those trends continued, with new announcements and new products in all of these areas.

SRT Marine Technology, who supply AIS products to many OEMs, showed me their full range of AIS class B and A products, consisting of receivers and transceivers that use less power and have NMEA 2000 built in compared to their first generation products. The 2nd generation AIS class B transceivers are also using less than half the amount of power compared to the 1st generation. SRT also produce SARTs, AtoNs (Aids to Navigation), antenna splitters, standalone AIS identifiers for use by vessels without a power source and AIS MOB devices. All in all a very complete AIS product line from the major vendor in this space. {Panbo coverage here.}

As Ben reported this was a first outing from Vesper Marine for their new WatchMate Vision and XB 8000 black box AIS class B transceiver, both with integrated WiFi. I was very impressed with these new products; they show imagination and a lot of fresh thinking. Vesper Marine thinks, and I agree, that the Vision will appeal more to power boats and super yachts and that the 850 with its push button controls will be preferred by workboat crews and power conscious sailors.

The integrated approach to filtering and selecting AIS targets on the Vision that I was shown is waaay beyond what any other vendor offers right now. There were so many good ideas in the Vision GUI that I hardly know where to begin! Things that stood out were the way that you can use a ‘zoom’ circle without losing your context, how a selected boat that moves off-screen when you zoom in will be shown via a small arrow pointing in its direction, and the ease with which you can choose different filter presets. Just a few minutes with the device clearly showed me how everything is oriented towards helping the navigator build up as complete a picture of the surrounding AIS vessels.

Vesper’s new product also show a very grown up approach to wireless. The built-in WiFi hardware can function as an access point for up to five devices, plenty for the intended use, but also function as a client to an existing Wifi router on a larger boat. It will supply raw AIS as an NMEA0183 stream over Ethernet for iNavX and other navigation solutions. Vesper also supply an app that can be used to control the Vision. This worked well in the demo. This way you can set and monitor an anchor alarm from your bunk. It will work much better as an anchor alarm than a pure iThing based solution as it will still work when your phone battery goes flat or if you accidentally shut off the app. What I did not come away with was a clear picture as to exactly which alarm functions are available in the XB8000 black box solution. Obviously you will have access to the ‘live’ stream for navigation software, but I’m not sure whether the user will be able to set the same alarms as on the Vision. I’m sure that this will be cleared up in the future. For now it looks as if Digital Yacht has some serious competition in the Wifi to AIS market!

Bruce Coward from Offshore Systems showed me their expanding range of NMEA 2000 products. They now have a J1939 to NMEA 2000 interface, a Modbus to NMEA 2000 interface, analog inputs (for use as a battery monitor, for instance), digital inputs and outputs and more standard 4″ displays including a colour version. In early 2012 they will bring to market a flush mounted 10 and 15″ colour display to show and control the NMEA 2000 data. This time it’s Maretron’s N2Kview that needs to look round its shoulder. I visited the Navico stand to view the B&G Triton display in action. These look mighty fine in real life. One downside is that I learned that you cannot control B&G autopilots with it, only Simrad AC-12 & 42. If you do so using the autopilot controller you need to dedicate one Triton display to showing autopilot data; that display then cannot show navigation data. I could not get corroboration to the rumors that a Simrad branded version is in the works, although this looks like a no-brainer to me. {See corrections and nuance in B&G comment below.}

Beyond the Triton, NSS and Broadband 4G radar they had even more news! On the professional side of the company they launched new autopilots — the AP-70 and AP-80 — which are interesting but not very relevant for us leisure sailors as they are just plain overkill for most Panbots.

More relevant to Panbots, is the availability of what Navico calls “Advantage”, which is a range of support programs for each of their three brands — Lowrance, Simrad and B&G. For Lowrance, it means that Navico will ensure that faulty products are fixed or replaced and returned to the customer within 7 working days. Additionally, in case of a failure customers will have the option to upgrade at a discount price to the latest model technology within the first five years after purchase. This does not only apply to the faulty product but also to ancilliary products such as dispalys, radar, sounders and autopilots as long as they are part of the same overall system. For Simrad NSE, NSO and NSS this is expanded with a one business day turnaround in the first year of ownership. Also, Simrad branded products now get onboard warranty service for the first two years when the products have been installed or signed-off by a certified dealer or installed by a Navico-authorized manufacturer. For B&G this period is not two but three years. As far as I understand this program is in force as of now and also applies to products that are already installed.

Lastly, Navico gave a presentation on their wireless strategy. Although they weren’t ready to give all details the general idea is that they are going to open up all software interfaces required to access their multi-function displays remotely to any software application developer that is so inclined. Navico wants to sell more displays, not maintain and develop software. They will bring out a separate Wifi bridge so all hardware can remain Navico branded. We’ll have to see how this pans out but I think this is a great development. As long as they do not make the barrier to entry too high (large fees or per-install costs) I think this could be a very smart move on their part.

I’m definitely trying to find out more about that last tantalizing paragraph, and many thanks to Kees Verruijt for once again reporting from METS. Of course it’s impossible to cover METS thoroughly and if anyone else would like to report please be in touch. Meanwhile, as I don’t have a METS photo to close with, how about this shot I took late this afternoon. Check out what all those cameras were seeing here. ~ Ben 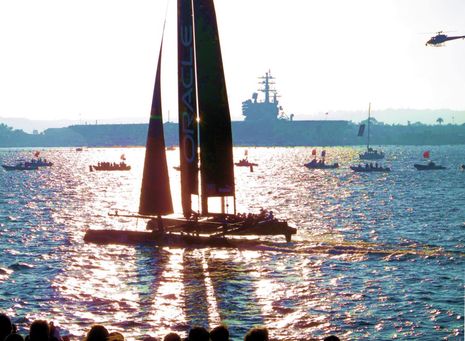