My macro photography needs improvement, as does my cable stripping, but I think this shot makes a point. From the left, the cables above are standard (DeviceNet) NMEA 2000, SeaTalkNG (aka NMEA 2000), and SimNet (aka NMEA 2000). Notice the similarities. The internal wires all adhere pretty closely to the NMEA color standard, which goes as follows, “Net” nomenclature included:

So the SimNet cable is slightly odd–the Net-H more yellow than white, and the shield apparently just foil, not wire–but then again it’s the one that’s truly skinny and light. I didn’t have LowranceNet Red or Garmin “NMEA 2000” cables to strip, but I wouldn’t be surprised if their wires were also color matched, and it doesn’t matter much anyway because they are both plug compatible with standard N2K connectors and devices.

At any rate, the matching colors made it very easy for me to throw a Maretron micro-size field-attachable male connector (itself neatly color coded) onto the SeaTalkNG “stub” cable (below). Thus I was able to hang an ST70 display off the lab’s ever-growing test N2K network. (And–bada bing–it powered up and slickly displayed about every data PGN available, but more on that later, this is about cables.) However, you don’t have to make your own patch cable to marry SeaTalkNG (or SimNet) to standard NMEA 2000 cabling or devices. Raymarine later sent over both male and female adaptor cables and they’re available for sale. In short, N2K cable mixing is not a big deal. Later I’ll post more about the SeaTalkNG design, maybe even theorize about why it exists (short answer right now: no idea!). But before I close, let me draw your attention back to the standard cable above. Note the exterior braided shield plus the additional EMI shielding around each of the two wire pairs. If that cable costs about what the others do, and supports more installation doodads than any other system, why not use it? 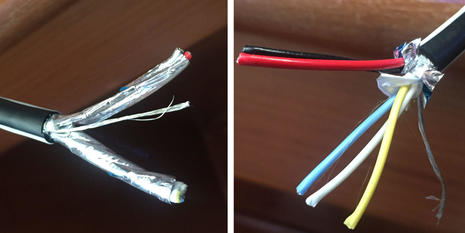