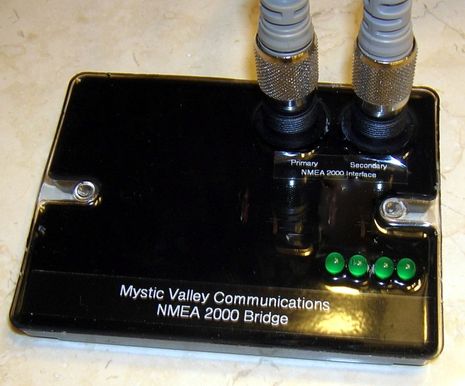 So what the dickens is a NMEA 2000 bridge and why would you want one?  Well, I think the answers are complicated enough, and important enough, that they deserve two entries.  Mystic Valley Communications, the small company that produced the prototype above, describes its bridge as an “intelligent connection between two electrically isolated NMEA 2000 networks that copies transmitted data between the two networks.” Obviously, then, this is another way to deal with the backbone power issues discussed here in the past; with a bridge you can have two N2K networks that act as one in terms of data but are independent in terms of supplying power to devices, and in terms of a power failure.  But the Mystic Valley brochure (unfortunately not online yet) goes on to claim that the bridge can also be used to increase the number of devices and drop lengths beyond what’s allowed for a single backbone.  How is that possible?…

The critical concept, I think, is that this bridge doesn’t just pass data from one network to another, but “copies” it.  In other words, the PGNs are read by a microprocessor and then re-broadcast fresh on the other network.  They’re reborn!  Which may not mean much until you start to grasp why an N2K network has a limited number of nodes, limited backbone length, and a limited total drop length, which has nothing to do with the limited capacity of the power wires carrying 12v to the nodes, and little to do with even the bandwidth of the data wires.
Somewhere I have a recording of Maretron CEO Rich Gauer waxing eloquent about how N2K is an impedance-based network protocol, how well the data waves travel through the backbone as long as the cable and connector characteristics are correct and the terminating resistors are there to prevent back splatter (my phrase), how the drop lengths need to be limited to minimize data wave reflections, and how the usually robust process can get screwed up by impedance-related subtleties.  I really should write an entry around Rich’s rap, because he can really give the technology life and help folks understand why care must be taken (especially with the large networks Maretron sometimes works with).  But for now suffice it to say that another feature of a bridge is that it lets you have one large data network split into two (or more) independent impedance environments.
At any rate, this stuff can get real when you create an extra large N2K backbone and/or get involved with some of the more finicky devices.  And it’s our good fortune that a regular Panbo reader, Jeremy Anwyl, has not only gone down both those paths but has already had some success using an industrial bridge as a cure.  We’ll hear from Jeremy next week in a guest entry that might be subtitled “One brave man’s experiment with a CANbus bridge, and the issues that drove him to it!”
I shouldn’t close without also noting that an optional feature of Mystic Valley’s bridge is the ability to filter PGNs passing between networks.  This has tremendous potential for certain situations, I think.  For instance, in Fort Lauderdale I learned that the proprietary-seeming CANbus control network that Side Power uses to integrate its various thrusters (and now stabilizers) is actually NMEA 2000 compatible because the engineers anticipated the day when bridges like this would make it possible for critical gear like theirs to integrate with larger multi-manufacturer networks in a super safe fashion.
Mystic Valley Communications, incidentally, is headed by David Morschhauser, who does a lot of technical writing and training for NMEA, as well as N2K consulting.  Neither the bridge nor the optional BridgeBuilder software are priced yet, but they are scheduled for release early in 2011.  And MVC may not be first.  BEP is already showing the one below on its web site, though that’s all I know about it so far.  NMEA Bridges are coming, and next week we’ll learn more about why. 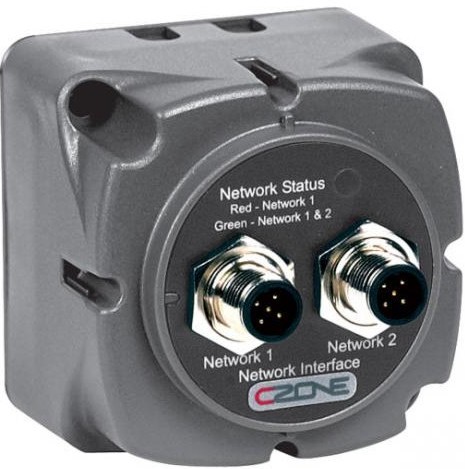