NMEA 2000 certification, the elephants in the room 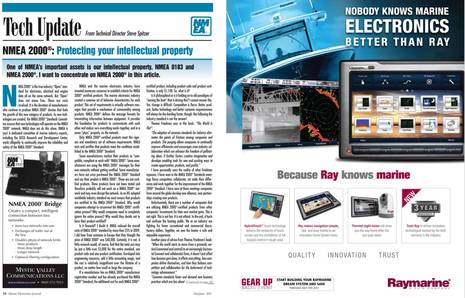 It’s great that the NMEA’s magazine Marine Electronics Journal is available online these days, but I screen captured that two page spread above for reasons that may not please the organization. The “NMEA 2000, Doing it right” cover story of that May/June issue is a series of interviews with several dealer/installers, and while it’s pleasing to hear that the Standard is really happening — it’s part of most new installs, and seen as a good thing for all parties — I found the  interviewer’s emphasis on avoiding non-certified N2K products a bit odd. And in the “Tech Update” seen above, my friend and NMEA Technical Director Steve Spitzer doubles down on this theme, which — sorry, Steve — deserves some debate, I think…

If you read the column you’ll find that Steve goes on quite a rant about manufacturers who market their products as NMEA 2000 “compatible” and suggests that products which haven’t been certified “probably won’t work on a NMEA 2000 network” and “may even disrupt the network.” And at the end he suggests that the industry needs to “work together to ensure that ‘rogue’ products do not disrupt the marketplace” and even urges readers to report such “rogue” non-certified gear.
Well, holy cow, that’s not hard!  For instance, how about Raymarine, the big electronics company with the full page ad facing Steve’s column? If you go to NMEA’s handy database of N2K certified products and search on Raymarine you will find that the E Wides shown in the ad are certified but no C Wides, no autopilots, no instruments, not even the SeaTalk to SeaTalkNG/N2k translator that I’ve seen work with numerous displays. And you’ll find only six certified devices for Furuno, which is no surprise given our previous discussions, but I was quite surprised when I looked up Simrad and Lowrance. I have no idea why but neither the NSE/NSO/NSS nor the HDS Series  are certified (even if I thought I saw “good N2K citizenship” in the underlying OS years ago).
In short, there are many non-certified NMEA 2000 devices out there, and a lot of them are made by three of the Big Four NMEA manufacturers. And note that the 412 certifications seen in the database screenshot below include numerous repeats, like different lengths of the same cable. Note too the newly added warning stating that non-certified gear “will not interoperate properly with other NMEA 2000 certified products.” Sorry but I just don’t buy that certitude. Sure, I’d rather have a certified device but many of the non-certified ones seem to be interoperating fine on my boat and many others. And guess what?  Certification is not a guarantee of interoperability. For instance, though the Navico NAIS 300 is a certified N2K transponder, I’m pretty sure that it is not yet sending the standard Class B static data message as discussed recently.
I just don’t understand why NMEA is taking such a harsh stand on certification, especially when the “rogues” are in fact some of the main companies driving innovation in marine electronics. Steve Spitzer says the goal is provide consumers with “safe and valid market choices” but I don’t see how scaring them away from many decent products achieves that. I get the value of certification, for us and for NMEA, but I also get that while N2K has evolved in a somewhat messy fashion, it has gotten to a pretty good place, and is getting better every day. I think NMEA might do better with a carrot than a stick.
What do you think?  But, please, there’s no need to spout about how NMEA and/or N2K are failures. Neither notion is remotely true. Check, for instance, the new Master Dealer Program seen in the sidebar below; seems like a great idea to me. And I can tell you that NMEA 2000 is even better than NMEA says it is!  I just completed installation of five MFDs of different brands, two PCs, four radars, and many sensors all networked to two N2K networks, which were by far the easiest part of the job. Tests at my mooring looked good — despite the presence of several ‘rogue’ devices — but tomorrow should be an interesting real world test. That’s when I’ll try to show a WoodenBoat School navigation class what modern marine electronics are all about, while also cruising to Brooklin in what may be fog and rain. Wish me luck. 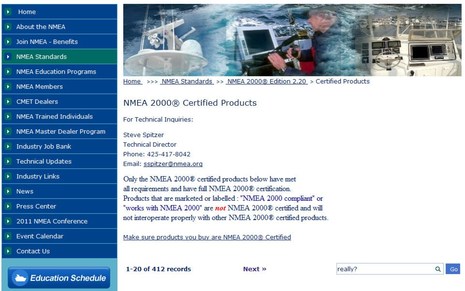