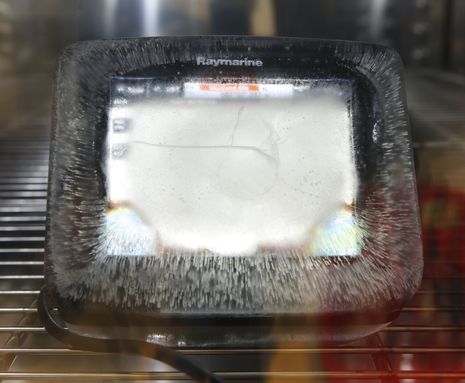 This frozen aSeries MFD has almost finished a two-day low temperature test, but that’s only the beginning of its suffering. Next it will run another two days in a high temperature cabinet with 85% relative humidity, and there’s still 19 more days of torture to Raymarine’s ERT (Early Reliability Test) Qualification Process. The quality of the testing tools and seriousness with which they’re used was as impressive as the Raymariner on-the-water lab, and I’m publishing more photos below because it’s reassuring to see what proper modern marine electronics have to go through before reaching our boats. But I’ll also attempt to describe the product innovation processes in play at Raymarine’s R&D center, which seemed equally impressive though much harder to photograph or quantify… 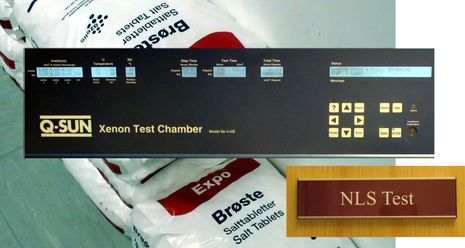 Some of Raymarine’s environmental testing was difficult to see in action, like the Red Sea level sun, humidity, and spray aging possible within the Q-Sun Xe-3 Xenon Chamber, but I did think of how little the RD418HD radome on Gizmo’s mast has faded or yellowed since I began testing it in 2009. Similarly, they couldn’t safely show us what happens in the Near Lightning Strike (NLS) closet, but while I doubt they can prevent all forms of lightning damage, I’m glad that they seek out fixable weaknesses. Meanwhile, the 250 kilograms of salt tablets stacked along a hallway suggested how the salty fog chamber reaches Icelandic levels. 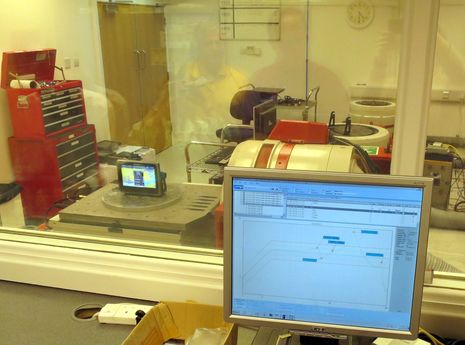 The shock and vibration testing was more dramatic. In this scene the new a12 MFD on the shaker table is undergoing a protracted sine sweep with the PC graphing the vibration of both the table and the display. Thus, frequencies that cause harmonic reactions stand out so either the MFD mount can be modified or the device tested further with the more difficult vibes. Trade Only’s Chris Landry nicely videoed this test along with the nasty machine that delivers measured impact whacks to screens and other parts. 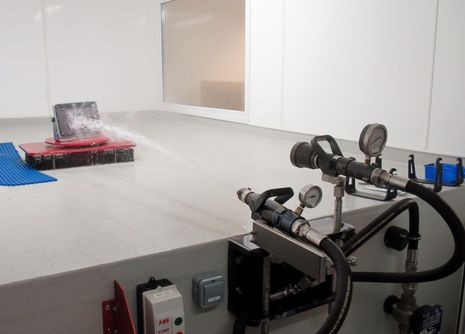 Chris’s video also features the water jet and spray booth, which is purposely the last stop for devices that have been frozen, baked, vibrated, etc. Apparently, testing to IP (Ingress Prevention) Standards should be done with “aged” equipment and besides, according to Raymarine’s Director of Engineering Gordon Pope, they test beyond IPX6 and 7 because the ultimate goal is to avoid major warranty issues. He noted, for instance, how an aged MFD with failed gasketing might survive the IPX6 100-litres-per-minute jet at 100 kPa from 3 meters because the pressure actually resealed the unit, but the same unit might fail the lesser IPX3 spray test. 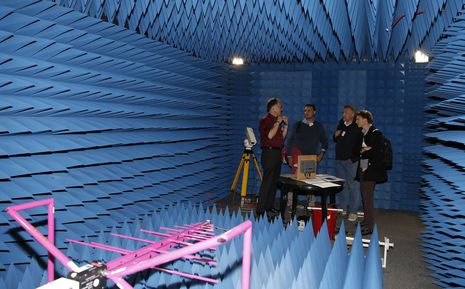 That’s Pope explaining one of Raymarine’s several EMI (Electromagnetic Interference) test chambers to some of the visiting journalists. The sounder module on the table, which is powered up and receiving transducer data, is being targeted with EMI that might emanate from other gear on a boat, while the test engineers use that white camera to watch what happens on the screen of a networked MFD that’s on the floor. The module will also spend time in a chamber that looks very similar, except that a receive-only antenna will measure any EMI the sonar throws off, so hopefully it passes whatever FCC, CE, etc. standards it’s meant to meet (which Raymarine is qualified to ascertain).

Pope is passionate about the testing process and often emphasized the word “science” during our tour. Both he and Director of Product Management Chris Jones previously worked for Motorola and other mass consumer electronics companies, and they can vividly describe the engineering precision and discipline it takes to, say, quickly design a new and different smartphone and then manufacture millions of them glitch free. 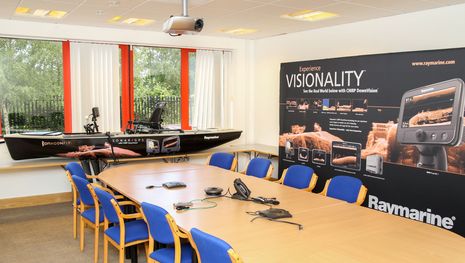 So while Gordon Pope likes to talk about the science of product assurance — incidentally, Raymarine maintains subsets of test engineers and equipment at its contract manufacturing facilities in Hungary and China — some of Chris Jones’s favorite terms involve the “pace” and “cadence” of product development. For instance, how did Jones’s small team of sonar engineers march from unusual concept to finished DragonFly hardware/software? A good conference room helps, as do nearby prototyping and testing facilities, but a whole lot of the challenge is prioritizing goals and dividing the tasks into doable chunks. At Raymarine, they call the three-week development sprints “scrums” (as in rugby), and they’re followed by three weeks of evaluation and then another scrum, etc. etc. (While the marketing dept. dreams up alluring terms like “visionality” and someone tricks out a Hobie fishing machine because Ray has ambitions in that exploding market.) 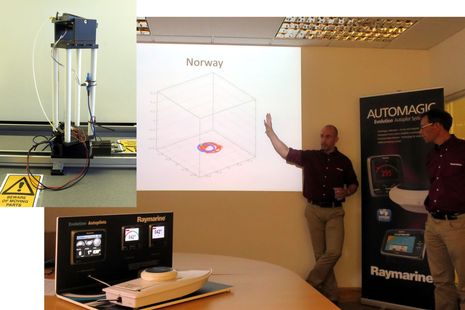 While each team at the R&D center gave an interesting presentation, perhaps the deepest involved the Evolution Autopilot system. That’s Ian Matt, who worked on helicopter and formula one race car electronics before Raymarine, and Mark Johnstone, who first cofounded Tacktick and engineered the wireless instruments that Ray sells today. They’re explaining some of the algorithms that made the EVO 9-axis AHRS — that’s an attitude and heading reference system with 3-axis magnetometer, 3x gyroscope, and 3x accelerometer — into a marine “compass” that can be mounted most anywhere without calibration. Apparently, it can pull off that trick most anywhere on the planet, too, even areas of extreme magnetic dip like northern Norway. The diagram shows in red the raggedy raw magnetic heading data collected, while blue illustrates how the EVO extra sensors and smarts resolve the data into something much more accurate. The photo inset at left shows a gadget the team used to move the AHRS in multiple ways at once. 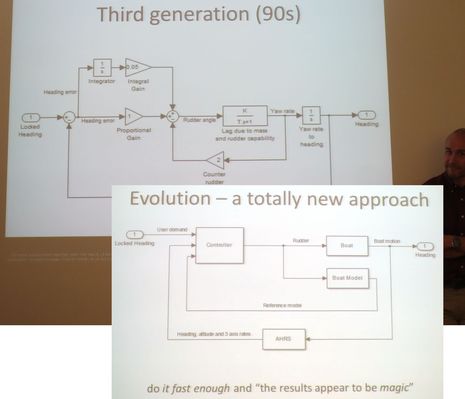 Once they were confident that the EVO sensor really can feel a boat’s motion well, the developers were able to use it as a data collection tool to see how well their autopilot logic was working on some 50 beta test vessels. They can even turn the data into graphic simulations that showed test boats steering better and better through waves as the code writing scrums proceeded. And development did not end when Evolution went to market. Evo is thought of more as a platform than a product, much the way all the MFD series (and even DragonFly) run LightHouse software that is updated about every three months. The first major Evolution update came in February; Hydro-Balance can purportedly sense and correct variable hydraulic issues like air bubbles and hose flexing that can cause poor pilot performance, and it’s just software.

Incidentally, I used the Evo AHRS as a heading sensor on Gizmo much of last season and I’ve only seen better performance from a Furuno SC30 satellite compass that’s bigger, more expensive, and fussier about where you put it. Installing the rest of the Evolution autopilot system would be easy except that my solenoid-driven steering means I have to exchange the working Simrad rudder sensor with a Ray one – a tight-quarters job I don’t relish. But I was motivated by the presentation in England and also some positive reader reports. Can Evolution handle following seas better than Gizmo’s current AC60 course computer and RA42 rate compass? Maybe it’s time to find out. 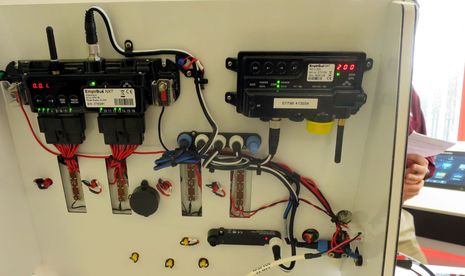 I haven’t heard much about Raymarine’s support of Empirbus NXT digital switching since the Miami 2013 announcement, but it’s purportedly attracting the interest of European boatbuilders. I also learned from the Empirbus product manager that the main DC module (left above) can handle almost any switching or monitoring task on its 16 channels and also supports a wireless, battery-free switch technology that I’ve been hearing good things about from another marine developer. There’s much to study here. 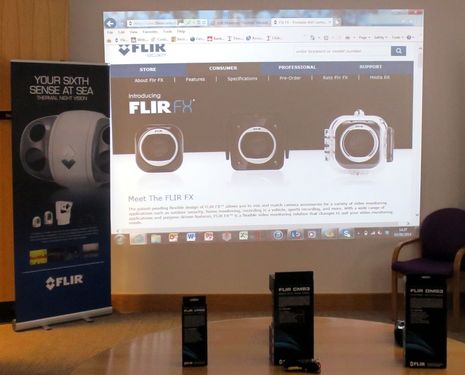 How much did FLIR have to do with the Raymarine turnaround that’s seemed obvious as the product lines rapidly evolved over the last few years? One conclusion I reached in the UK was that FLIR (and Garmin, which also made a bid) saw value well beyond the brand name and distribution network. The R&D facility in Fareham may be relatively new, but the engineering and boating culture within often stretches back to the Autohelm days. I did laugh, though, when told that the guest WiFi password is “IReverywhere!” FLIR is a very determined company, and apparently they did make some changes at Raymarine, mainly in terms of key managers and guiding the “pace” of development.

While the Ray crew is also disciplined about discussing not-yet-announced products, they did say that there may be interesting MFD integration possibilities with FLIR’s new FX line of wireless daylight cameras. And who knows where the company’s tiny Lepton IR sensor may end up (besides the FLIRone iPhone cam)?

I’ll close with a bigger thought. Obviously the Raymarine visit impressed me a lot, but I also saw some excellent R&D science and cadence when I visited Garmin a few years ago. And while I once characterized Navico as “firing on all cylinders” (which still seems true), I’d now say the same of Raymarine and have long admired Furuno with its powerhouse hardware developers in Japan and software team in France. We live in a good time for marine electronics, people! Thus the collage of handsome Discovery 57 with FLIR M-Series cam serving lookout on mast, e12 MFDs at helms, and yours truly thumbs up about everything. 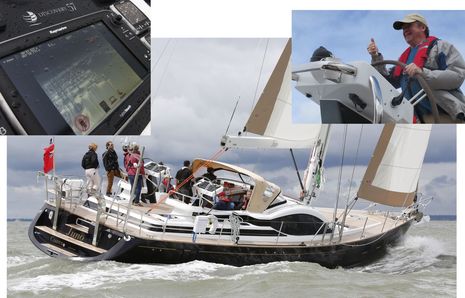