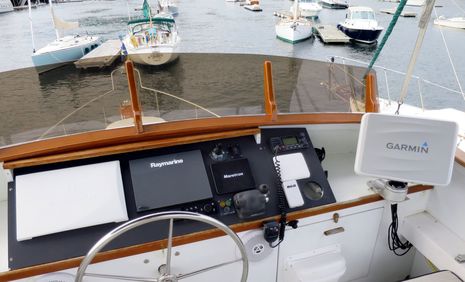 Redoing almost all of Gizmo’s electronics has taken longer than I would have guessed last fall, when it seemed like a good idea to rip everything off the boat. And sadly, I’m not done yet. But the hoped-for glass bridge theme is revealing itself and I like it a lot. But then again, new equipment and even just re-installed old gear also means fresh opportunities for things not to work together correctly. In this entry I’ll go over much of Gizmo’s test setup for the next year and a half — though by design there’s room for more — and also note a couple of features that have worked well and not so well during recent shakedown cruises…

Incidentally, the Garmin seen in the top photo is the 8212 I began testing in the lab, which fit quite neatly in the impressive second generation ScanStrut Deck Pod. A normal user wouldn’t then mount the Deck Pod on a V-Lock, but I want some further placement flexibility. Eventually, a Simrad NSS16 evo2 will also be installed on the flybridge, mounted in a Seaview Power Pod which is also impressive (and there will be a comparative review). Note the flat, rubbery sun cover on the Raymarine gS125; its sticky but non-marring backing seems to keep it well fixed to the glass screen, actually better than some other soft Ray covers I’ve tried. 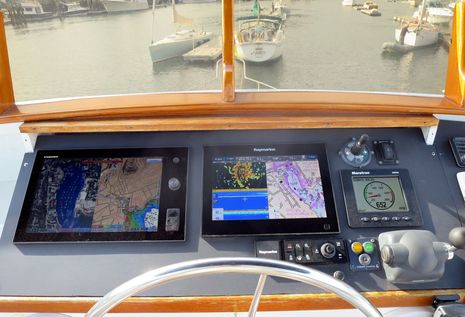 There’s a lot more to the glass bridge concept than dark edge-to-edge glass over bright displays, though that certainly looks good. Consider what’s not on Gizmo’s flybridge anymore, like analog engine dials, stereo remote control, thermal camera joystick or even an autopilot head (the B&G keypad is probably a temporary holdover from the 2012-13 test suite that’s been Panbo’s header image too long). Glass bridge era multifunction displays have more functions than their predecessors and seem to get yet more with each software update. It’s not just about multi-touch controls either, though those can feel wonderfully intuitive and even elegant. That Ray keypad just past the wheel is very useful, and all four major brands now offer something similar (with the Furuno MCU002 Remote just released, great demo video here). Again, normal boats wouldn’t have two brands of glass MFD on their main panel, let alone four altogether, but I’m still getting the sense of how these clean, fast, easily controlled MFD’s can contribute to relaxed and successful navigation. One data point is how the always awesome Furuno TZT charting engine seems even more so in its new spot. 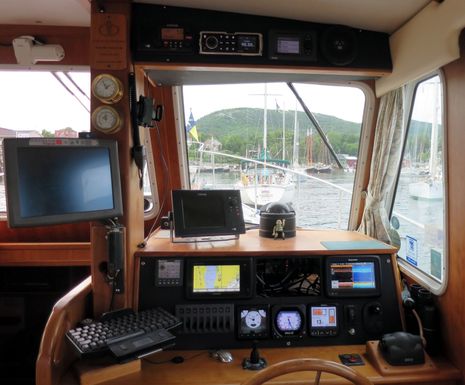 The glass bridge concept also isn’t exclusive to large, expensive MFDs. Once the Simrad NSS7 evo2 arrives, Gizmo’s lower helm will have three panel-mounted 7-inch touch MFDs each networked to their bigger siblings above as well as radars, sonars, and lots of NMEA 2000 sensors. (Furuno doesn’t have a contender in the hot 7-inch touch category — the relatively new GP1870 plotter/sonar looks a powerful value, but a TZT sibling it is not — though then again the TZT14 can closely integrate with MaxSea or Nobeltec TimeZero running on a PC like Chart Table 21). Once the first-generation NSS8 goes back to Simrad, Gizmo’s lower helm will also have much better sight lines than it used to. 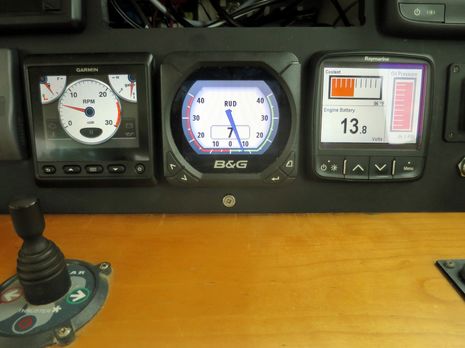 Of course, a normal boat wouldn’t have so many N2K instrument displays, either, but this is a particularly great test bed for seeing how the different developers are dealing with somewhat less common data like engine, electric and tank monitoring. I’m tickled about having the data above in digital color and being able to easily flip to other useful screens when the engine is shut down, but every display needs more work, both in terms of data messages understood and gauge customization. I also intend to test their alerting and alarming abilities, though I doubt that any are even close to what Gizmo’s Maretron system can do (and good alarming is arguably more important than good data display). 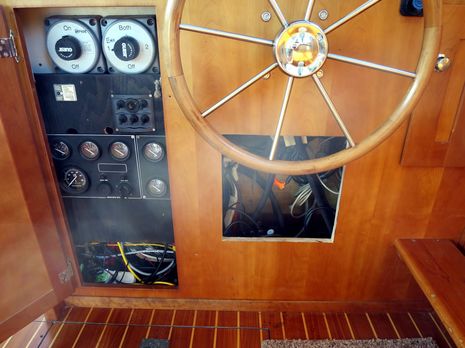 Gizmo’s orginal engine gauges are not gone, but they are now tucked away in the flybridge console and in this main cabin wiring cabinet. I even created a new wiring access hole (which will get a nice door eventually), which also opened new space for the various black boxes behind the scenes. 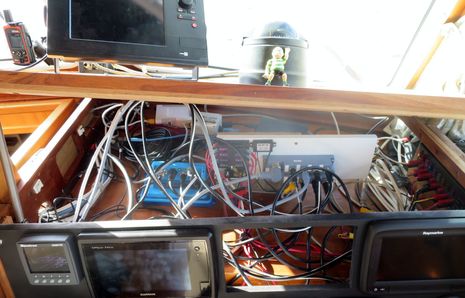 One goal was to create more space behind the lower helm panel. I swear that this space was almost completely empty at one point this spring and will also claim that it’s potentially neater than it looks right now, with power feeds grouped to the right, N2K networking (eBay style) in the middle, and Ethernet/Wifi/Bridge matters to the back left. Note, too, the Vesper XB8000 blue box lurking behind the scenes glass bridge style but supplying AIS and more via WiFi, N2K, and NMEA 0183. I’m particularly pleased about the latter, which I didn’t really test much for the March XB8000 review, but it’s also where an odd bug turned up. 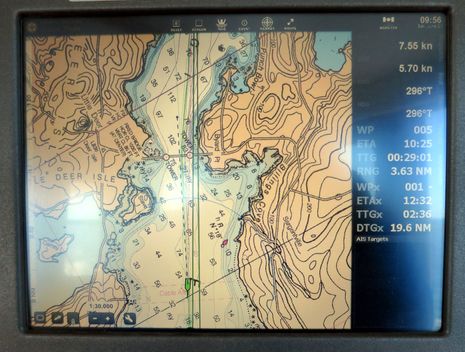 If I had a better photo, you’d see that Rose Point Coastal Explorer (running on Gizmo’s nearly antique Datalux Tracer police car PC) is not only getting full GPS and AIS info over a NMEA 0183 USB connection with the Vesper, but also Depth, Wind, Boat Speed and Heading that originated in N2K sensors (that spot-on Heading seen above is from the Raymarine EVO AHRS recently discussed). So the Vesper XB (and Vision sibling) are gateways as well as transponders. But, doh!, CE is regularly showing Gizmo’s screen icon going in the opposite direction of the boat’s actual heading. A log file has been recorded and Rosepoint is trying to figure out what’s going on. CE has numerous recent improvements, incidentally, including an update on that already nice route feature where WPx equals any future waypoint in your list, like a bridge with specific opening times. 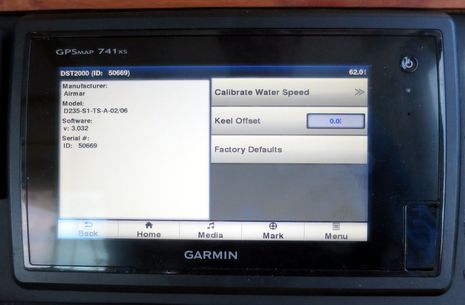 The CE screen also shows STW (Speed Through the Water) almost two knots under SOG (Speed Over Ground). This is not due to a strong following current — millions of lobster trap buoys give us lucky Mainers nearly constant visual current info — but rather the fact that the poor paddlewheel is located right behind the protruding transducer used by the EchoPilot FLS (I haven’t finished wiring yet). It would be interesting to see if the disturbance to STW can be overcome with calibration, but while the Garmin system seems willing to give it a try, the results are just an error message. Perhaps the DST2000 Airmar loaned me years ago needs a firmware update before it can be calibrated? 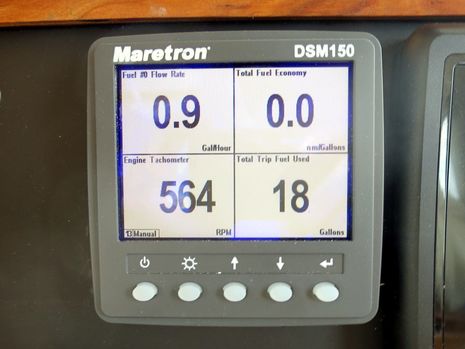 But that’s quite minor compared to the problem with the boat’s new Maretron fuel flow system. Though it ran bone dry in last fall’s initial testing, the sensor plumbing started weeping diesel into the boat’s fortunately huge engine pan. It’s very likely an install error on my part — I wasn’t 100% positive about the thread goo I used, for instance — and wasn’t I kicking myself as the problem unfolded during Gizmo’s first cruise of the season, which was my annual gig with a WoodenBoat School nav class. Everything worked out fine, and I may even have fixed the leak by tightening everything possible, but the leak almost overshadowed how interesting the data is. I have much to learn about how the flow info will coordinate with tank levels and work with various MFDs’ fuel management systems, but I’m already seeing a seemingly accurate relationship between reported fuel economy and actual conditions, even a modest headwind at a low cruising speed. 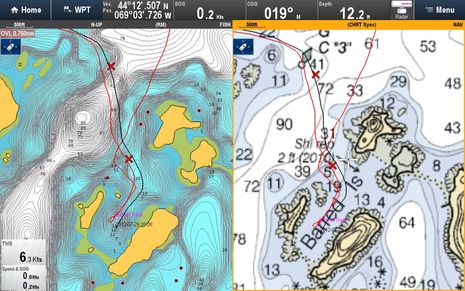 And now for a 100% positive shakedown experience. When I casually tested the slick Raymarine sonar log uploading feature that Navionics recently added to its mobile apps (see end of entry), the data apparently included at least one past trip to this somewhat daunting-looking Barred Island anchorage. A few weeks ago the SonarChart seen at left had the deep water detail (probably from the older fishing bathy data that was somewhat confusingly folded into SonarCharts), but no detail of the anchorage, where the official chart is also quite vague about depths. It was real kick motoring in there with the new SonarChart I updated on a Navionics+ card, seeing useful info I’d collected myself and that is now available to every boater with access to SonarCharts. I’m collecting sonar logs regularly now — it’s nearly painless — and am up for trying any other easy sonar data sharing system. Navico just announced community-sourced Social Map, for instance, and — cool! — UPS just delivered the test NSS7 evo2. I have an install to do this afternoon 🙂 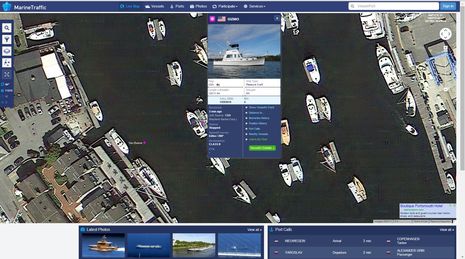 For some totally unknown reason, though, I keep assembling these long (but overly infrequent) entries. But the last two images are just oddball fun. Usually, when you look at an AIS target overlaid on a satellite photo map, a boat that might be shown at the location is not the same boat that’s there now. But Gizmo and I have been hanging out in Camden Harbor so much that we made the Google map. I even know that the photo is at least current to August 2012 because the solar panels are at work and I’m aboard because the tender is clipped on. And note how close the Vesper GPS is registered to its actual location on the flybridge aft starboard rail.

Finally, here’s an image from a recent shakedown cruise to the Burnt Island public park I once enthused about in Maine Boats, Homes & Harbors. Someone has sweetly framed my article and hung it in the unusual little cabin I had discussed and photographed – an honor I got to enjoy with Gizmo anchored down the shore in nearly the same spot as 2010. Is that meta or what? And when are you coming to cruise beautiful Maine? I’ll probably be working on installs and bug control at my Camden float. 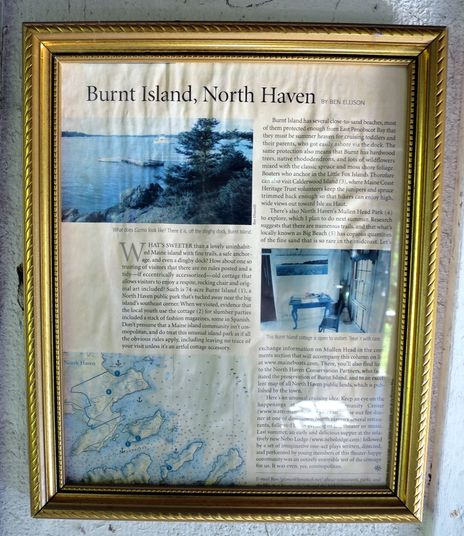 PS 7/2: A fully loaded lower helm panel is way better than one with a hole in it, and initial testing of NSS7 evo2 very encouraging. Plus for this photo I set the instrument screens in tentative “on the hook” mode. 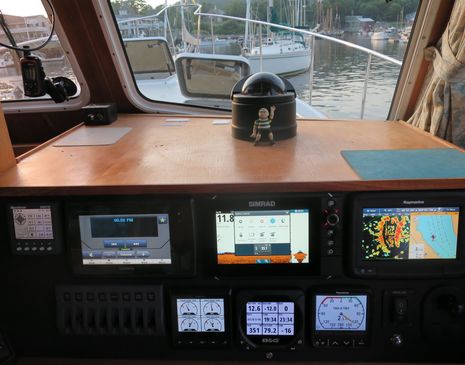