Shouldn’t our community sourced marine data be open to all developers?

I’ve been cogitating a lot about crowdsourced depth data lately, including the realization that “community sourced” is a better term. Whatever it’s called, Navionics in particular has made it wonderfully easy to collect and share sonar files and especially wow with the Vexilar integration. But the business stakes are high and thus we have the frustration of Navionics and Garmin butting heads. Upon further contemplation, a wistful thought from that last entry — “Wouldn’t it be great if we could upload our data to some service that would make it available to any chart developer?” — seems not only important to avoiding further messes and helping this technology proliferate, but also quite possible… 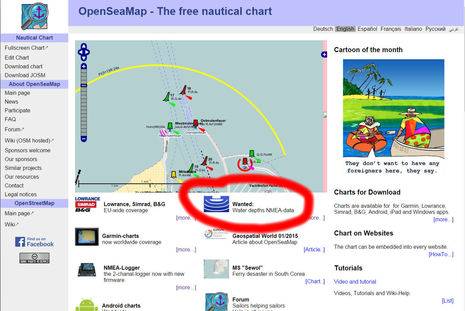 The “ownership” of community sourced data is an issue. Sure, we physically possess the sonar files we make ourselves, but very few of us will go to the trouble to send those files to every chart maker that could use them. In reality, the data will amass in the servers of whichever company makes it easiest to use and to submit, and that company may eventually “own” the category. It’s well known how this “the rich get richer” cycle can work with crowdsourced data — think about how our product reviews helped with Amazon domination and how our search data benefited Google. 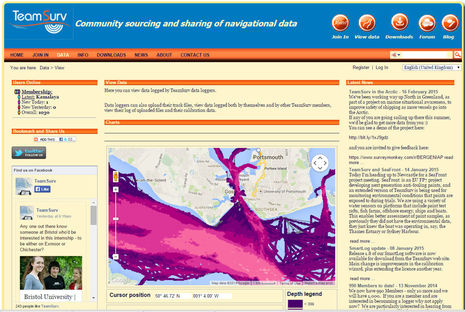 So one reason Garmin management may be reluctant to work with Navionics SonarCharts, besides the integrity of their own tight chart/MFD integration, is that they don’t want to help Navionics acquire ownership of community depth sourcing. Similarly, while Navico does support SonarChart display (though only as fishing maps, I think), they do not make it easy to collect soundings for Navionics with Lowrance, Simrad, and B&G gear. There’s a competitive tension underlying data collection that works against the overall community. It’s fine with me if lots of chart makers compete over how to distribute and display community sourced data, but I want to share mine with all boaters, not just users of one type.

Therefore I think we need some organization willing to be a neutral Switzerland of community sonar logs, able to accept depth data in many forms via many routes, store it securely, and make these raw files easily available to any commercial or noncommercial chart developer who wants them. OpenSeaMap seems like a perfect candidate, TeamSurv also seems like a possibility and there are, no doubt, others. 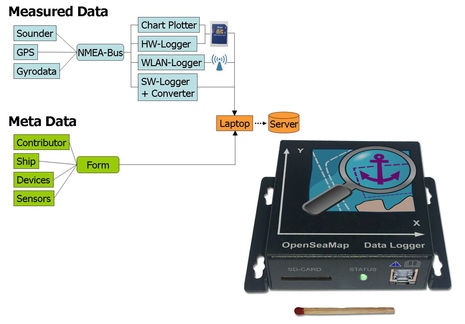 As a subproject of OpenStreetMap, OpenSeaMap looks like an ambitious open source effort to chart the world using community sourced data. The OSM volunteers have already created a good sonar file collection infrastructure — including the inexpensive hardware logger seen above — and they collect data under an ODC Public Domain Dedication and License (PDDL) that seems right for maximum sharing.

I want to be perfectly clear though; I am not suggesting that Navionics and other commercial sonar charting companies simply use community sourced depth data processed by OpenSeaMap or any other third party. The chart developers should be able to process our files any way they like. But I am suggesting that OSM or a similar open source organization modify its model to give all chart developers easy access to our raw data files. The result could be a lot more data for their own project, and doesn’t the whole concept fit with the open source spirit? 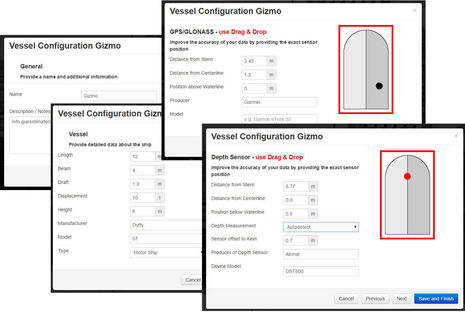 Last weekend I registered as an OpenSeaMap depth data contributor and was impressed that I could set up different (metadata) profiles to describe different boats or equipment setups used to collect the data. OSM even makes it easy to describe the relative locations of a depth transducer and an associated GPS, so that the usually small location/depth discrepancies can be removed in processing.

I uploaded several of the file formats that OpenSeaMap already accepts, and it was neat to see them get processed and viewable within an hour or two. There seem to be many depth file formats in use, many of them proprietary, but I’m hopeful that the open nature of the proposed raw data pool will encourage developers to divulge their specs (or other developers to reverse engineer them ;-). One issue might be full sonar files like the one above called “CAMDEN.sl2” that I recorded with a Simrad system. The 58 megabyte file covers less than a mile of bottom track, though Insight Genesis can use the extra information to determine bottom hardness and vegetation types. I suspect that bulky file size may be an issue even with Navico’s slick new GoFree MFD data uploading, but for the most part depth files are efficient and the components are so generic that they can be generated in all sorts of ways. 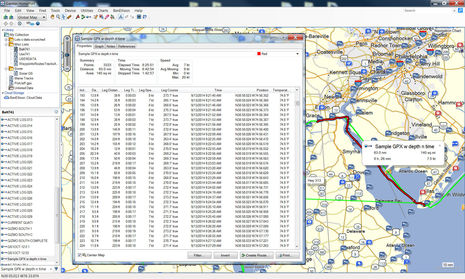 The Garmin HomePort screen above shows a GPX track file I created on a Garmin MFD, but it could have come from Navico, Raymarine, or many other sources. The 1.2 megabyte file covers 63 miles of Delaware Bay and vicinity at fairly high resolution — Navionics recommends a 1 second time period and collecting speeds under 15 knots — and I think it contains all the data fields needed for proper sonar charting (depth and position are obvious, and time is needed to correct for tide levels).

Here’s what that GPX file looks like in OpenSeaMap’s track viewer and also when overlaid on actual OpenSeaMaps. The presentation needs lots of work! It should at least have adjustable color coding, so that anyone shortcutting across that particularly tricky section can see green where it’s safe for their boat and red where it’s not. But this whole open raw data pool idea is agnostic about presentation. I’d be happy to see OSM make better use of my depth files, but it doesn’t really matter as long as every other chart developer can also use it. 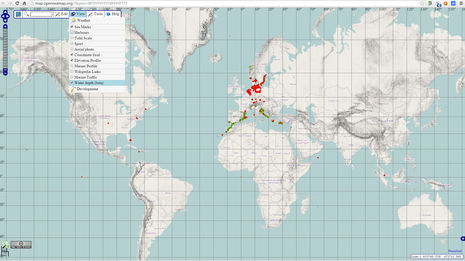 In fact, OpenSeaMap needs an enormous amount of depth data to accomplish its goals. I significantly expanded its North American database with just a few files (open the map and check View/Water Depth beta to see what I mean). But I’m hoping that’s motivation for OSM to adopt the raw data pool idea, and that readers will add further encouragement.

Not that OSM, or TeamSurv, or anyone else could make this idea work all by themselves. While OSM has already built good tools for collecting community depth data, Navionics in particular has taught us all that making it really easy to contribute data is highly important. So, it’s encouraging that founder Giuseppe Carnevali seemed encouraging about this raw data pool idea, and I’d certainly appreciate the Navionics SonarCharts even more the company works with an open pool and especially if it makes it easy to contribute data to such a pool. And ditto for Insight Genesis. Plus it seems reasonable to think that developers who aren’t yet involved with community sourced depth data might help collect it to a common pool. There are all sorts of charting and other apps that can already take in depth, GPS, and time data from my boat systems via WiFi, and wouldn’t it be nice if they could automate depth file uploads?

But maybe I’m having a fever dream here? I usually write about technology that already exists, not wild ideas about what could exist. Please deliver your feedback below. 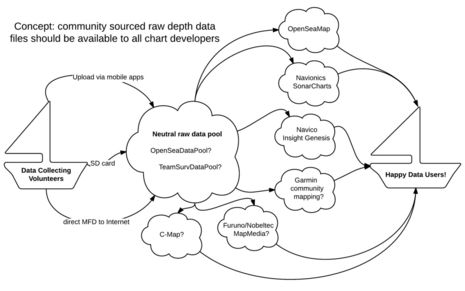