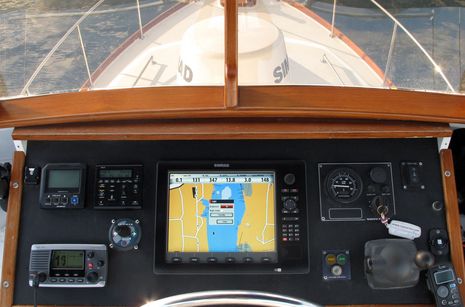 Yeeeeha, Simrad is introducing the interesting new NSE series today, and Panbo already has a pre-production unit installed in Gizmo’s dash.  Apparently it’s not entirely coincidental that this NSE 12 model (there’s also an 8-inch) fits fine in the hole once occupied by a now ‘classic’ Raymarine C120 (which wouldn’t accommodate a new C- or E120W).  Who wouldn’t want a nice slice of that upgrade market, and the NSE may well earn one.  For starters, that display is not only as bright and crisp as it looks in this not-fiddled-with photo, but it’s backlit with power-efficient and cool running LEDs.  And displayed on screen is another power-related feature I’ve picked up on lately…

The NSE 12 has a Standby mode that shuts the screen down completely, but comes back on instantly. (I measured 12 watts in standby, vs 33 at max level 10 with “1500 nits” of screen brightness, 25 at level 9, 20 at 8, etc.)  This feature is getting important, at least for power sensitive sailors, as MFDs can take soooo long to boot up these days.  That’s particularly true of the Furuno MFD12 I’m testing, which is where I first saw a Standby mode.
That may be a lot of words spent on a minor feature, but it’s a good example of the smart thinking I’m seeing in the NSE. Some of it is quite familiar from the Lowrance HDS…like excellent NMEA 2000 management and diagnostics. NSE is most definitely built on the Navico Operating System (NOS).  But NSE is not HDS in terms of hardware and user interface.  The machine below has a significantly more solid feel to it than the HDS-10, and check out the I/O.  Aside for the three auto sensing Ethernet ports, there’s a DVI video out and a USB port (with another USB in front, under the SD card door).  I’m told that in addition to memory sticks these USB ports will eventually support off-the-shelf keyboards and mice, so it seems quite possible that I could have a big second NSE station at the lower helm using just components already there for the boat’s PC (like NavNet 3D). 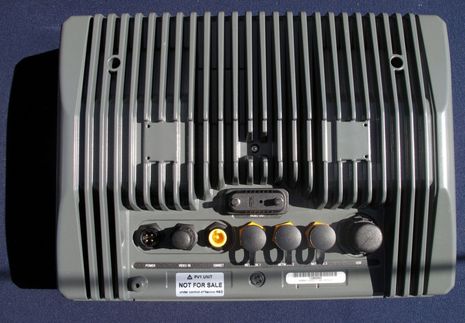 The NSE interface was clearly grown from several familiar roots, but the sum is quite new. NSE actually stands for Northstar Edition, and thus it has those 6100i-like dedicated mode keys across the bottom. But it also has classic Simrad numeric keypad shortcuts, a NX/M series style cursor key cluster, and a very handy rotary knob that wasn’t on any of these MFDs.  I’ll be writing more about the NSE interface, which I’m getting fond of fast, but will finish today with examples of the two default radar modes found under the radar key (you can easily add more): 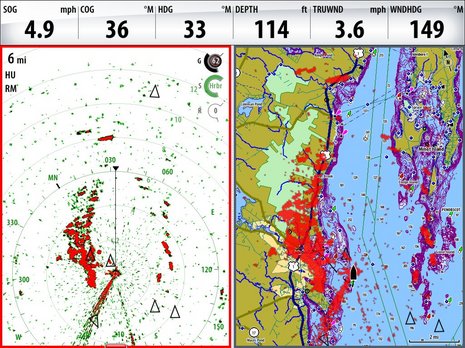 Note the radar gain, sea, and rain controls upper right in the left window. You can quickly switch between them and set auto modes or manual settings with just turns and clicks of the rotary knob. I’ve maybe overdone the gain but am getting a headland at 8 miles with the flying bridge mounted BR24. (There was no noise in full auto mode, but then again some of those islands three miles to starboard weren’t visible either). 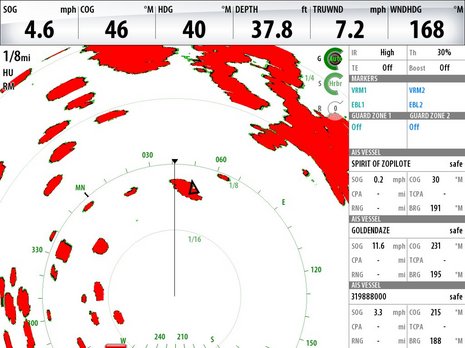 This default all-radar screen looks almost like a ship’s, with the nearest AIS targets shown in data boxes. (I presume the lack of CPA and Range calculations is just a Beta software thing.) The very readable data bar, incidentally, can be custom edited for this screen, or globally, and can be one line, two lines, one line flipping between two sets of numbers, or not at all. Nice.
The NSE 12 will retail for $4,595 and will supposedly ship in November.  That seems likely as even this pre-production unit is quite stable, and very fast. Simrad just posted lots of NSE info here.