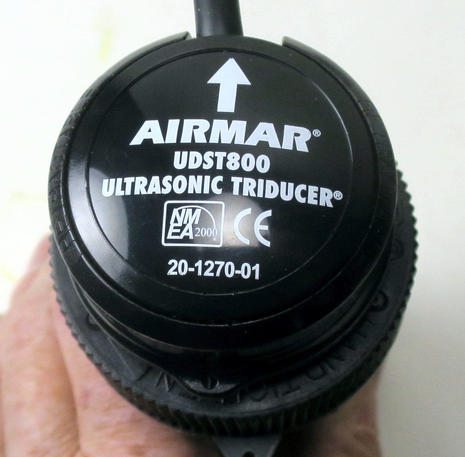 Airmar’s newly announced UDST800 Ultrasonic Smart Triducer is real! I’ve held one in my freckly hand and even installed it on Gizmo. The reality of a new product would not normally be news, but the history of Airmar’s high tech ultrasonic and electromagnetic speed sensors has frustrated boaters wanting the promised precise and reliable Speed through the Water results, which should be many boaters, I think… 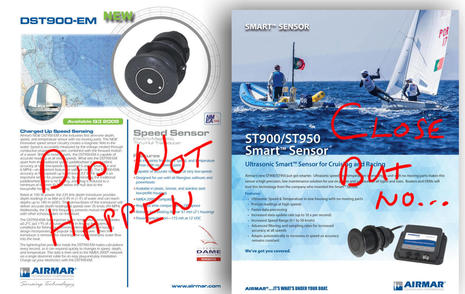 To be brutally frank, neither of the Airmar products described above ever materialized as presented, and the same is true for the Ultrasonic DST900 that Kees Verruijt enthusiastically photographed and explained in 2012. In fact, as he mentions, this odd situation started years earlier.

In Oct. 2009 Dan Corcoran’s great review of the Airmar CS4500 Ultrasonic speedo kicked off a discussion about how the high value of accurate STW (sometimes just called Speed, but definitely different from the Speed over Ground delivered by GPS). Sailors crave it for precise calculation of True Wind relative to water, but so do power cruisers for better miles-per-gallon fuel calculations. Accurate STW is also key to meaningful set and drift calculations.

There’s also talk in an old entry about how much better the ultrasonic technology would be as a “smart” transducer able to send data directly to NMEA 2000 networks (or to NMEA 0183). And one Panbo commenter came up with a still-live link to the Airmar DST900-EM — “Available Q3 2009” — while another pasted in an Airmar tech support note about an ultrasonic NMEA 2000 triducer about to come out as the DST900-CL (and those revelations led to a discussion about how electromagnetic speed sensing might compare to ultrasonic).

So in 2009, and again in 2012, there seemed to be at least a hard core crowd ready and willing to spend extra money to say goodbye to their paddlewheel speed sensor in favor of more accurate and reliable technology. They never got a chance to pull out their wallets. What happened?

I do not know why Airmar made several false starts in this area — there’s no upside I can think of — but I can theorize. As mentioned in my Part 1 entry about Airmar’s certified installer program, the company mostly works with OEM’s, not retail customers, and maybe trial balloons are more normal in that environment. It’s also an engineer-run company, so maybe testing trumped marketing. Perhaps, above all, the market for premium speed sensors is small, while Airmar has been relentlessly pushing out into other markets while also driving the CHIRP fishfinder revolution.

And none of this matters much now, except to hopefully clear the air and set the stage before we discuss Airmar ultrasonic and electromagnetic speed technology that really, really does exist. 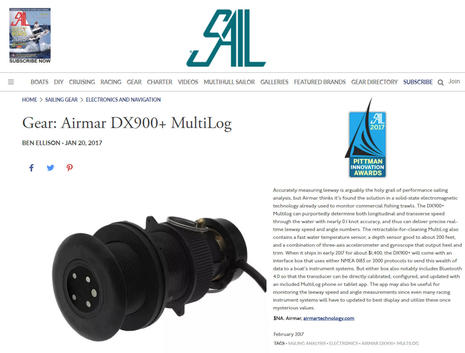 First, let’s consider the Airmar DX900+ MultiLog that seems related to the DX900-EM of 2009, but with the intriguing added abilities of measuring leeway and connecting via Bluetooth to apps (in addition to N2K or 0183 cabled connections). Kees broke the story at METS 2016, and I was part of the SAIL team to award it a Pittman. 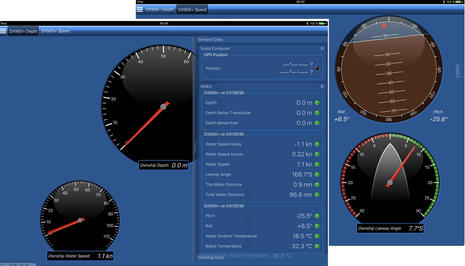 Given the possibly embarrassing history, I was a little surprised that the DX900+ took a while to ship, but it is now available at outlets like iMarine (and the slick looking iOS AirmarCAST app above is available for download). In fact, occasional Panbo contributor Jeremy Anwyl bought one last summer for his latest vessel — a mighty Nordhavn 76 — and I was hoping to host a dual review with Kees reporting on his DX900+ beta testing experience aboard the awesome sloop Merrimac.

Unfortunately, neither Jeremy nor Kees have reliably working DX900+ sensors yet. It’s not worth getting deep into the details here as both cases are still being investigated by Airmar tech support, but it may be that EM is best suited to simple 12v electronic systems, or maybe that the NMEA 0183 option is preferable because then the power supply can be kept especially clean.

Also, Airmar tells me that numerous DX900+ are out in the field without reported problems, so here’s hoping an owner of this highly innovative sensor will report in about actual results. And that Jeremy and/or Kees will be able to report on working EM sensors soon.

So the ST900/950 ultrasonic speed sensor Kees also reported on at METS 2016 got my “Close but no… cigar” markup mockery because it didn’t actually ship until after Airmar decided that UST800 Smart Sensor and UST850 Smart Sensor titles made more sense. {Correction 2/20: some ST900/950 sensors did ship before the name change.}

I agree that UST800 is a good designation for the ultrasonic version of the ST800, but the best news is that the two UST sensors — the only difference is which standard Airmar casings they fit — are really available. The online prices starting at $918 are not trivial — Airmar does not list retail pricing — but consider this performance graph. 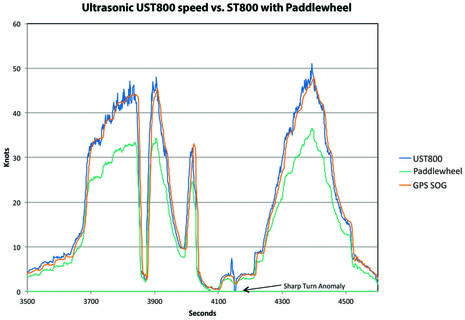 If I understand this graph correctly it shows a boat alternately accelerating and decelerating over about 18 minutes while speed is measured by paddlewheel, ultrasonic, and GPS. The paddlewheel fails quite badly over about 35 knots, but if you click the graph bigger and look closely, you’ll see that the paddlewheel isn’t doing very well at low speeds either.

Moreover, I think it’s safe to presume that Airmar used a clean ST800 or similar paddlewheel sensor for this test, and paddlewheel performance most definitely changes with fouling. Also, note the latency. In acceleration the Ultrasonic usually measures speeds slightly higher than the GPS and paddlewheel and vice versa as the boat slows down, which certainly suggests better responsiveness. But I’d like to see for myself… 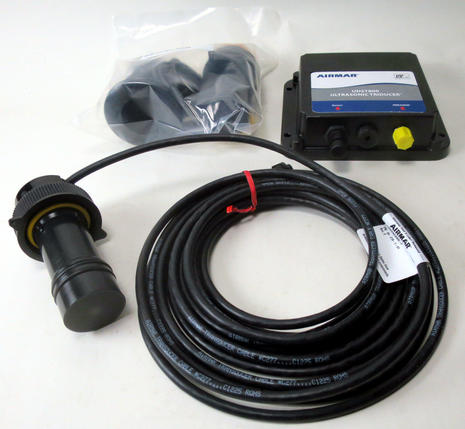 When I asked about testing a UST sensor in January, I was delighted to learn that a UDST would not only be announced soon and was already in production. And, lo, there it is, posing in my shop before I took it down to the boat (and quite like the DST900 Kees saw in 2012).

The UDST800 ultrasonic triducer was also announced early this week — press release PDF here — and though it’s not yet listed at Airmar, here is the combined UDST/UST install guide PDF.

It will be awhile before I actually get to see UDST underway performance in Gizmo, but you can see on the Simrad NSS evo2 screens below that it’s real and ready to go.