AIS, a threat to our liberty? 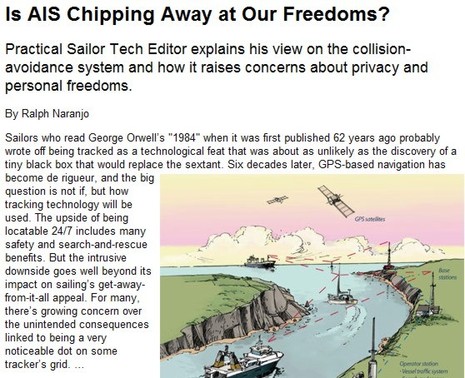 I remember a few years ago when some boaters worried about “Big Brother” style AIS surveillance while the IMO fretted about hobbyists using shore receivers to display real time coastal AIS info on the Web.  But all that seemed to go away, because — I think — people realized that AIS is indeed a public information network and that there is nothing especially threatening about its use by agencies or amateurs.  But today I was struck by a “fatcat1111” comment stating that “I absolutely do not want to update the Fed with my location every 30 seconds” and that he or she hadn’t felt that way until they read the Practical Sailor article above by marine safety expert Ralph Naranjo.  Well, maybe I’m completely blind about “personal freedom” but I’ve read Ralph’s article a few times now, and I just don’t get it…

This is tricky, as I know Ralph as a nice man with tons of experience and valuable writing in his wake and yet I feel obliged to both paraphrase and debate him.  That’s because many of you probably don’t have the Practical Sailor online access that comes with a subscription (though it’s worth considering), and the idea that not participating in AIS is somehow an expression of liberty deserves challenge, I think.  So here goes.  {Update: PS kindly opened up Ralph’s whole article.}
Ralph’s opening premise is that magazine writers and AIS manufacturers have not been forthcoming about the role of AIS in international security, especially regarding America’s Maritime Domain Awareness (MDA) program and its associated NAIS system, which is now monitoring some 6,000 vessels a day along our coasts.  But isn’t that because the primary collision-avoidance aspect of AIS is complicated enough already?  I know I’m hard pressed to keep within a reasonable magazine word count just trying to sort out the available types of AIS gear and confusion around them, as seen in my last Cruising World piece on the subject.  And, frankly, if I did have room to get into NAIS it would be as a valuable search and rescue resource, something I started noticing here on Panbo back in 2008, and just mentioned again during another AIS argument.
But Ralph hears Orwellian tones in the NAIS stated goal — “Armed with a comprehensive view of our nation’s waters, decision-makers will be better positioned to respond to safety and security risks.” — and wonders if those decision-makers might include “agencies for which you need a top-secret clearance to find their phone number.”  Heck yes, Ralph!  After the sinking of the USS Cole and the horror of 9/11, how could the national security folks not recognize that our harbors are very vulnerable?  Ideally, the USCG would like foolproof ID technology on every vessel coming into, say, New York Harbor, so that suspicious ones would stand out.
Ralph acknowledges this, and even the idea that a Class B AIS can serve as a sort of electronic passport as one cruises the coast, but then he goes on to suggest that the fact that his young grandson somehow made the TSA’s watchlist illustrates the danger of all this. Should we base decisions as important as carrying an AIS transponder on TSA mistakes?  He also discusses how “Innocent cruisers who have been boarded by law enforcement often re-calibrate their assumptions about privacy and search-and-seizure laws.”  Well, I didn’t actually enjoy men with guns on my boat last summer either, but I understood the concept, and I thanked them for their work.
But Ralph’s main worry seems to be that we will lose our “right” not to carry AIS transponders, and I’ll quote his whole paragraph on why you might want to exercise that “freedom” while you have it (which I suspect is what got to “fatcat1111”):

This decision is likely to be based upon the interplay between competing factors–on one hand, a perceived need for surveillance and security, and on the other, the right to freely navigate coastal waters. Scrutinizing the innocent in order to discover the guilty has gained traction without much congressional debate. It has become standard operating procedure despite constitutional conflict and challenges to prevailing views toward liberty. For many, whatever the effort, if it lessens the likelihood of another terrorist attack, it’s worth doing. Others are less willing to abdicate freedom and personal liberty. At present, a sailor has a choice in whether or not to become a blip on the AIS display.

Well, I value my “right to freely navigate coastal waters” tremendously, but I just don’t get how carrying an AIS transponder affects that.  In fact, I’m super excited about exercising my navigation freedoms down the East Coast next fall, though I realize that many of my habits — gunkholing into odd places, lots of photography, and all those antennas, to name a few — could be viewed as suspicious.  But isn’t it simply the reality of our times that makes driving an unknown, uninspected 37 foot boat down the East River analogous to stepping onto an airplane with a big heavy suitcase that no one looked at?
The freedom I’m worried about losing is the actual right to navigate wherever I can find enough water.  A few years ago a USCG Rear Admiral addressing a Miami room full of boating writers — the Guard has not hidden the MDA program — discussed what might happen if terrorists used a boat to pull off a major attack on a U.S. port.  I don’t think he was exaggerating or threatening when he said that one possiblity would be to confine boat traffic to proscribed channels wherever “soft” coastal targets exist.  Heck there could instantly be millions of citizens demanding just that.  Which is why I wrote a bit about the Admiral’s talk and programs he advocated like Waterway Watch.
This thinking is why I’ll happily and freely choose to use an AIS transponder when I head South.  Of course, I value the safety aspect a lot, but I’ll also be pleased to be seen by NAIS, as there’s another safety aspect to that and it may help the USCG do their job.  It might even mean that I’ll be subject to fewer “safety inspections”.  So what am I missing? What exactly is the freedom I’ll be giving up?  I’d really like to understand. 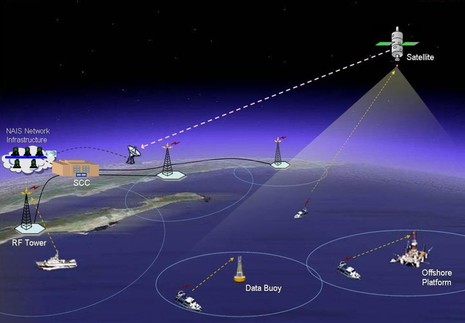