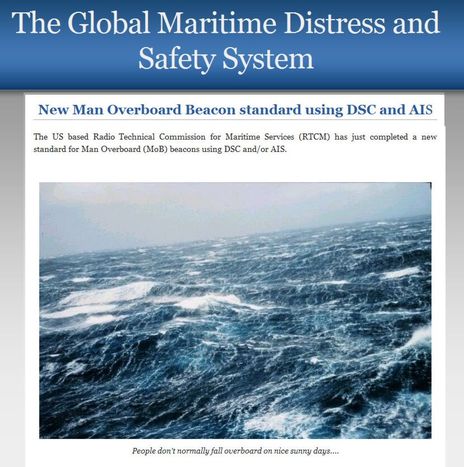 Here’s some good news, even if I had to Google out a non-governmental Australian site to find out what the RTCM here in the States is up to. But I’ve admired the clearly written expertise at gmdss.com.au before, and I’m confident that they have their facts right about the new standards for man overboard beacons using AIS or DSC VHF (or both!). Besides, the details seem pretty much what we expected, with a few interesting nuances…

However, the regulators apparently didn’t get the message that’s been pounded into me enough times that I’ve come to accept it: “crew overboard” is a better term than “man overboard” in the 21st century. Then again, names are easier to change than global technical specifications and, as described by GMDSS.com.au, those sound good.
The DSC MoB spec, for instance, allows for a much fuller featured device than what we saw with the ORCAdsc MOB Alarm back in 2010. An upgraded ORCAdsc could automatically go from “closed loop” mode — that is, only alarming the vessel or fleet it’s associated with — to “open loop” mode after five minutes in the drink. Then it would transmit “a standard all ships DSC distress alert with nature of distress ‘man overboard’ and GPS position automatically inserted…to all DSC equipped ships and shore stations in range (normally about 2 nm).” I don’t know that such a device exists yet but they will additionally include a VHF Channel 70 receiver so that the crewperson overboard will know that his or her alarm has been acknowledged and (I think) that also means that device will stop sending off alarms at that point. Sounds smart, but so does the AIS spec.
AIS MoB devices are essentially the same as personal AIS SARTs like the easyRescue I tested last season. The only difference I see is that the message sent is “MoB Active” instead of “AIS SART” which may be useful as AIS SARTs are more likely to be ship lifeboats than individuals overboard. These devices are already very much in use outside the USA — including aboard the Volvo Ocean Race fleet — and I know that at least Garmin has joined Raymarine in programming their MFDs so that they pop up an appropriate alarm (as I saw here). For yachts whose AIS plotter only sees AIS SARTs and MoB Actives instead of alarming them, Digital Yacht has developed the AIS Lifesaver, and meanwhile Kannad has worked with numerous lifejacket manufacturers so that its little SafeLink R10 Survivor Recovery System will fire off automatically on inflation. You may recall that this device was introduced in Miami a year ago, but with the standard now purportedly established, maybe Americans will actually be able to buy one soon (for about $450 a piece I’ve heard). The endorsement of West Marine is certainly another sign.
Would you rather have an AIS or DSC MoB beacon, or will you hold out for the dual technology device that the standard seems to suggest as a possibility? 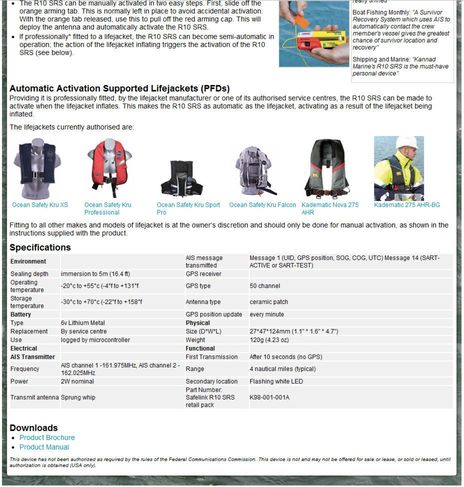