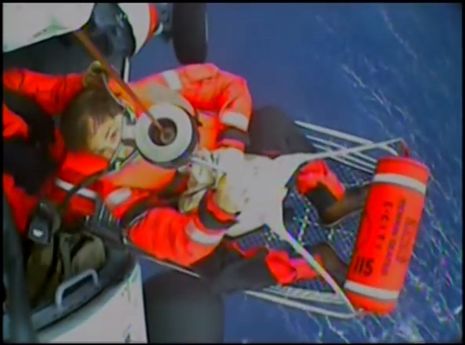 My friend and colleague, Charlie Doane, has been making the pages of Panbo since at least 2005 (sometimes even comically), and he does seem to get seriously offshore more than any other active writer I can think of. But, damn, it’s unexpected to post an image of him being hoisted aboard a U.S. Coast Guard helicopter last week. The abandonment of the very first Alpha 42 catamaran, Be Good Too, has been covered extensively elsewhere, probably in most accurate detail by Charlie himself, and discussions about the incident rage in various online forums. While I think that chewing over maritime casualties like this is a good thing — even if it does bring out the pedantic ass in some of us — let me also suggest an appropriate course of action for interested bystanders… 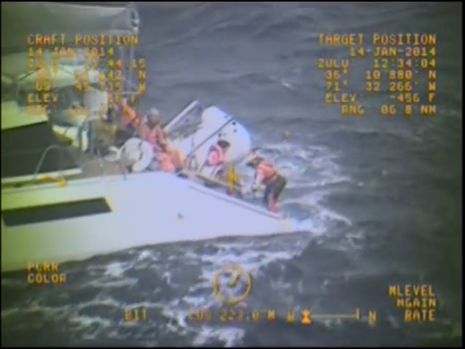 I’m already in awe of what the Coast Guard search and rescue (SAR) teams can do, but seeing a buddy in the middle of it adds another level of awesome. The screen grabs above are from the USCG video and that’s Charlie just about to jump off the stern with the encouragement of rescue swimmer John Knight. Note from their 36° 10’N, 71° 32’W position that they are about 300 lonely miles off Virginia. Besides the Jayhawk helicopter, the CG also deployed a C-130 aircraft and made helo refueling arrangements with a U.S. Navy guided missile destroyer, as described in this release. 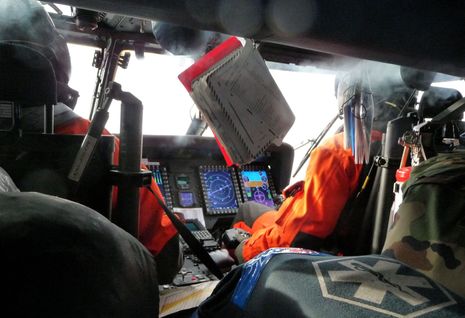 As explained in that release and also in Charlie’s account, the helo transfer wasn’t done in desperation. The folks on Be Good Too were just hoping for a ride to land from a passing AMVER ship, and the CG waited overnight before sending the Jayhawk, but surely its four-person crew were thinking of the Navy helicopter crew that crashed off Virginia just a few days before. Nonetheless, Charlie told me that they were super calm and professional, if not downright charming, and he also let me publish these photographs taken inside the helicopter. 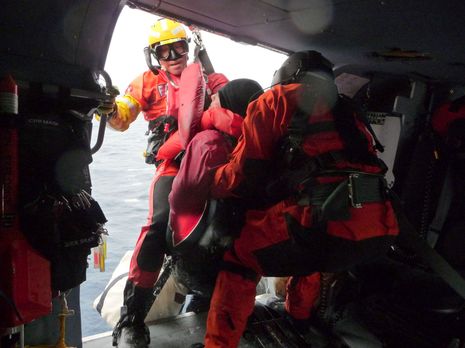 These two images of swimmer Knight and hoist operator Brian Light slinging up the catamaran’s owners — Charlie thinks himself lucky to get the basket — are particularly worth clicking on to see at greater resolution. Try to imagine the ferocious noise and vibration of the Jayhawk, along with the fact that they pulled off four boat-to-helo transitions like this. The USCG seems to have a remarkable success rate with this process, but I hope that doesn’t mask all the technology, training and courage that makes it possible. 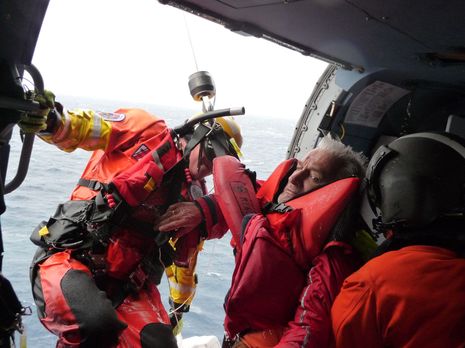 Another thing to consider is that the Coast Guard is arguably not an easy service to be part of. I’ve heard similar thoughts many times, as in the words of this writer: “A strong sense of tradition, an underdog mentality and a ‘make do with less’ attitude are the hallmarks ­of the U.S. Coast G­uard. Unique among U.S. armed forces, the Coast Guard is perpetually on active duty, chronically underfunded, entrusted with a vast array of responsibilities, but often overlooked.” 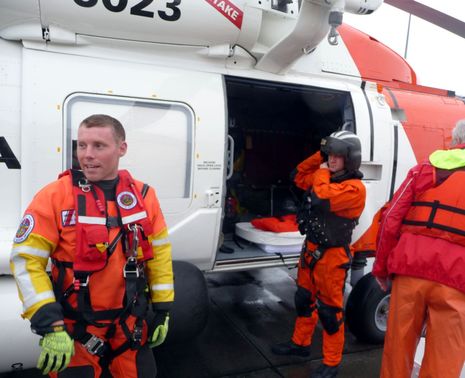 That’s why I think we should all take in the look of relief and justifiable pride on the face of AST2 John Knight — Aviation Survival Technician, 2nd class; rescue swimmer — and ask ourselves what we can do to improve the lives of the 35,000 active duty Coasties. Fortunately, there’s an excellent organization dedicated to just that task. Don’t be put off by the black tie dinners you may notice at the Coast Guard Foundation site; their good work extends throughout the chain of command (and, besides, those benefits raise a lot of money).
In fact the foundation makes its financial statements readily available, so you can verify that a large portion of any dollars you contribute will support sail training at the academy, recreational equipment on the cutters, relief for families in need, and many other items large and small. A few years ago I shared a meal with President Anne Brengle and was very impressed with what I heard, but it was a later incident that made me a true believer… 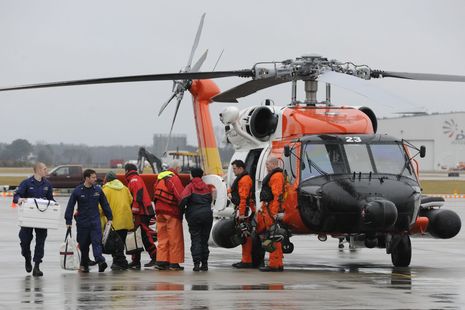 In the fall of 2012 I enjoyed the fairly famous Annapolis Boat Show evening chaos when all the sailboats exit their show so that the powerboats can get into theirs. I realized that a couple of the friendly guys keeping enthusiasts from falling off the floats were Coasties moonlighting as show security, and I asked about the foundation with no expectation that they would even know what this stranger in the dark was talking about. But one of them got quite serious and said something like “The Coast Guard Foundation helps every one of us every day in some way or other.” It couldn’t have been a stronger endorsement.

I’m closing with two photos taken by Petty Officer 3rd Class David Weydert at the Elizabeth City CG station where the crew of Be Good Too were reunited with terra firma. Charlie told me that one of the personnel there volunteered an hour ride to the airport and wouldn’t even accept gas money when they stopped to fill his truck. He also expressed appreciation and sorrow for the owners who just saw their cruising dreams shattered. I think that the image of them below could be a poster for the sort of deep relief the Coast Guard often delivers when things go badly wrong, and it might also give pause to those who jump to blame.
That said, there are interesting Sailing Anarchy and CruisersForum discussions about the incident, and I’m glad that Charlie is willing to confront the critics. (Note that both our blogs also appear in the nifty SailFeed blog garden, though potentially with different comments than what’s on our own sites).  I’m going to follow the discussions myself, and I’m tentatively hoping that the Alpha 42 concept, which Charlie still thinks of as a good design, survives what may have been poor initial execution. I doubt I’ll be dissuaded from thinking of multihulls as reasonable for prudent bluewater cruising, either, though I will listen to the arguments against.
Today, though, I also donated more money to the Coast Guard Foundation and I hope you will too, even if you don’t care that Charlie Doane lives to sail another day (I kid, I kid). After all, it might be your ass in a sling eventually! (Honest, I never realized how appropriate that saying is until just now.) 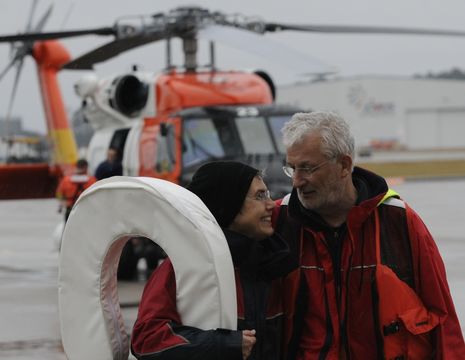