Sorry, but I’m going to start off this week with depressing news:  The U.S. Coast Guard — which I’ve always thought of as a major proponent of DSC VHF — recently issued a Safety Alert that treats one of its core features as a hazard.  In fact, the Guard now “strongly recommends disabling the automatic channel switching feature…”  Does this mean that placing direct DSC calls to AIS targets — a function that seems to be nicely designed into the DSC system, and one that many of us are enthusiastic about — may not work well?  Yes, it probably does.  But, then again, the USCG found itself between a rock and a hard place…

You can find the notice of the ALERT shown above here, and the ALERT PDF itself here.  I learned about it from Joe Hersey, a hardworking member of the USCG staff in Washington, and I reacted badly, suggesting that it seemed to honor a problem mostly caused by user inexperience, while causing problems for perfectly proper DSC use.  Shouldn’t a radio operator understand that a DSC Alert would automatically switch his or her VHF from its working channel to 16?  Isn’t that the idea?  But I didn’t think through what hell this could cause in, say, New York Harbor if some fool (or malfunction) was setting off false DSC Alerts over and over again…which is largely what caused the USCG to act.  Well, Joel Milton was working in those conditions and he vividly described the consequences in WorkBoat:

“Picture this scenario. Your loaded barge is down to 10 feet and closing
on a dock, the assist tug is working on you and you’re about to tell
them to take their engines out of gear. Then it happens. The alarm
blasts and you’re now on channel 16. By the time you switch back to the
working channel and tell them what you want, it is too late to avert the
sickening crunch of timbers or the squeal of twisting metal.”

Milton went on to detail the situation here, including how DSC radios should be designed to work around it.  Actually, the FCC mandated the ability to turn off automatic channel switching a year ago, and some radios already offered it.  The relatively new Garmin VHF 200, for instance, has this feature.  If I set the “Auto Change CH” seen below to OFF, I’d still be informed of a Distress Alert, but would have to select OK to make the Channel 16 switch (or could Cancel it and go on about my business).  This is different than the ability to make Individual DSC calls automatic or manual, which I’ve seen on many, if not all, DSC sets… 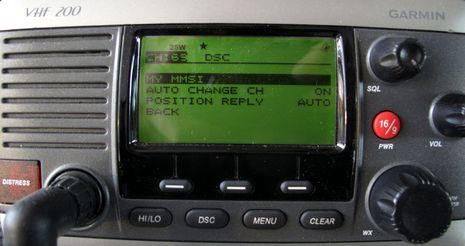 For instance, setting the Lowrance LVR-880 below to Auto means that it will acknowledge a direct DSC call and switch channels automatically (though you still have to hit Enter to stop the beeping).  It has nothing to do with the automatic Channel 16 switch when receiving a Distress Alert (though you can turn off DSC altogether).  But professional users like Milton don’t need Individual calls interfering with critical operations either, and I’m afraid lots of regular VHF users will turn off all auto channel switching as the Alert gets around.  I wish the USCG had suggested that the typical wheelhouse with two or more VHF sets designated one for auto switching (except when there’s a plague of false alarms), but I guess they needed to make the Safety Alert short and simple… 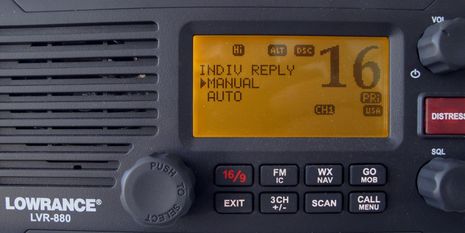 At any rate, the USCG list of VHF
manufacturers who offer at least some models that lack the ability to
turn off Distress channel switching (PDF downloadable
here) does contain some hope for a less messy DSC future, an extract from some new standards:

ETSI EN 300 338-3 V1.1.1 (2010-02), from Section 6.9.2.1:  If the equipment is engaged on a call and a DSC call is received with a higher priority than the current call the equipment will display the call information of the new call and present the operator with the following options: a) accept the call; or b) log the call. A discrete audible alarm will sound. The radio will not change to any channel specified in the new call unless the operator manually accepts the new call.

But it will take a long time for new DSC standards to become common.  In the meantime, it seems to be a technology that’s hard to use and little used, and now it turns out that one of its primary safety features is a hazard to some commercial vessels.  Is that depressing, or do I just have the Monday morning blues?