Em-Trak I100 Identifier, will AIS “be a victim of its own popularity”? 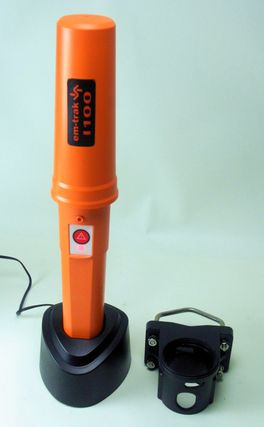 Though it looks like a commercial-grade AIS SART meant only for emergencies, the Em-Trak I100 Identifier is actually a special purpose Class B AIS transponder “suitable for even the smallest vessel.” It’s completely self-contained, with GPS and VHF antennas and a Lithium-Ion battery all packed inside that orange 14-inch tall waterproof casing. Once charged ashore in that AC cradle, you just twist lock the Identifier into the special pole bracket at right and it will automatically turn itself on and transmit standard Class B boat id and position messages for about five days. I haven’t actually tested the Em-Trak I100 in a kayak, but it certainly seems up to the challenge…

The Identifier also seems well suited for tracking tenders — and even “personal watercraft” — but if you download the brochure, you’ll see that it also seems designed for non-voluntary use. I say that because the I100 “has a number of built in passive and proactive security features to protect the unit from tampering and unauthorized transfer between vessels.” So if, say, an authority like the USCG wanted to monitor every boat moving through Miami Harbor, couldn’t they carry racks of these on their patrol boats and make any vessel that didn’t have its own AIS borrow a “Miami Visitor #xx” Identifier while in the area?

Now please don’t freak out, friends! While the Department of Homeland Security is definitely concerned about “soft targets” in places like the Port of Miami, it has shown no inclination to mandate AIS on recreational boats (despite the fears). I may finally have some news this week on the DHS plan to encourage voluntary vessel identification, but I assure that it’s not loaner racks of Em-Trak Identifiers. However, there are countries where AIS is already mandated on almost every vessel, and that makes me wonder about the old worry that too much of it would ruin its use in collision avoidance… 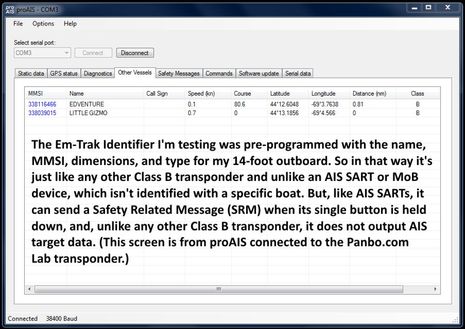 More specifically, I recently got a note from a writer friend who just used an AIS receiver in the Bahamas and noticed that numerous cruising boats have installed Class B transponders. “When adoption of B transceivers becomes more prevalent,” he worries, “displays will become too cluttered (like chatter on Channel 16 before cellphones), forcing people to disable this feature (like turning off the VHF because of the merciless chatter). I wonder if AIS will be a victim of its own popularity.”
My answer went like this: “I don’t hear people worrying about the clutter of too many Class B’s like they used to, so you’re a little late to that party. If there really is a problem, the solution is better target display software. A display can only show the targets that are moving, for instance, or only those that are within some CPA/TCPA thresholds. Others can be shown as simple dots or not at all (though they’re still being tracked). Turning off AIS reception altogether will be a dumb ass move and probably illegal.”
But he’s insistent: “I’m not late in the sense that mass adoption of Class B has not taken place yet. When it does, it will be a problem. The question is what happens when 70% of the rec boats are all simultaneously squawking out AIS on a Sunday afternoon on Biscayne Bay. I suspect the debate will flare yet again.” 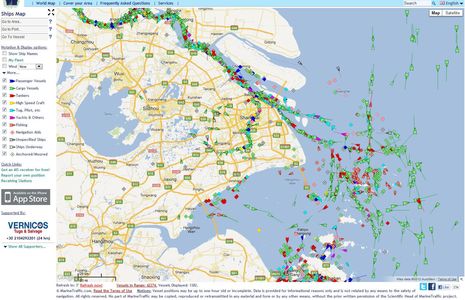 Let’s discuss! I’ll bet that a lot of readers have used AIS in places where the targets are much denser than the Bahamas or Maine, so let’s hear what it’s like. Afterall, the U.S. was late to approve Class B transponders and the authorities have not been aggressive about mandating AIS use on commercial vessels (where are those new mandates, by the way?). I think that widespread adoption of Class A and B AIS has taken place in some Asian nations, and maybe elsewhere. For instance, a peek at Shanghai on MarineTraffic showed 1,382 transponders in action, and almost half of those were underway (the count changes when you deselect categories). I believe that a lot of those boats are using AIS to avoid bumping into eachother, but what do their plotting screens look like? Has anyone been in traffic like this? Was it manageable? If not, would more intelligent plotting software solve the problem? Your thoughts please.

PS:  While the Shanghai screen above is the sort of thing that makes folks worry about AIS clutter, it’s zoomed to a scale that’s not realistic for navigation. The screen below is what I found homing into a particularly busy spot. There are still 112 AIS targets in those few square miles but even just MarineTraffic’s ability to somewhat minimize moored targets and give active ones a six minute predicted course line make it reasonably readable, I think. Note too that I used the photo map which shows actual vessels (at the time of the photo), plus I checked the sizes of targets, and it seems fair to say that almost every vessel over about 40 feet is “squawking out AIS.”  For this area, MarineTraffic does not seem to indicate if the transponder is a Class B, but I suspect at least some are. Anyone know more? 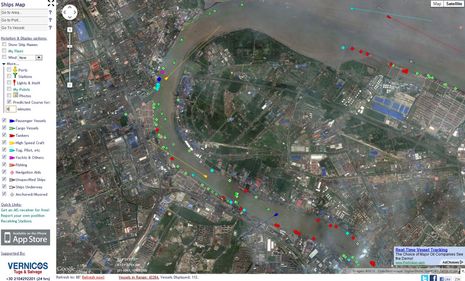