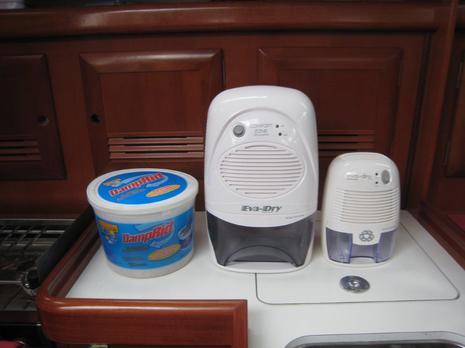 One of the products above has proven itself a far superior option in keeping my 39-foot sailboat pleasantly dry and odor free, despite an occasional need to close up the boat with wet sails or gear down below.

When I first purchased Breeze Pleeze, I read a great article in support of using continuous airflow assisted by solar driven fans. The article promoted the use of two fans, one on each end of the boat, forcing air in one end and out the other. It sounded like the way to go, but I was not keen on blocking the view through a couple of hatches and resisted the temptation to follow that advice.

Inspired by a neighbor who kept a large home humidifier on his boat, I tried the much smaller Eva-Dry 1100 pictured above and below. Despite drilling a hole in the reservoir so the contents would endlessly spill into the galley sink, it didn’t initially seem to make a difference. I suspected the airflow between my companionway hatch and dorade vent was effectively replacing all the humidity the Eva-Dry was slowly pulling out of the air.

I improved upon this greatly by blocking most of the vent holes in my companionway hatch. As evident from a digital moisture meter, and by the bone-dry feeling of the air each time we returned to the boat, I was in business. Compared to a large, heavy humidifier I would need to leave behind on the dock, this tiny unit was easy to tuck away inside the boat.

It was almost a great solution, but the product failed every six months of use, signing off in a fit of loud, grinding noise. 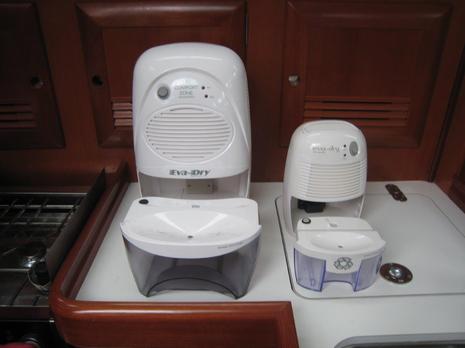 After going through three of them, I took a chance on the larger model after a reviewer on Amazon.com wrote that it was more reliable. The larger 2200 model pictured above lasted four years until its recent replacement. It is still small enough to easily store while underway. With the collection container being much larger, I have not yet encountered the need to drill a hole for continuous draining. Although it initially fills halfway pretty fast, keeping the vents on the companionway closed allows the reservoir to last about 7-10 days. And as a bonus to keeping the reservoir in tact, I have a continuous source of water ideal for filling batteries.

An unexpected benefit of the larger product is that the boat stays dry for some time after the product shuts down, measured at 45% on my digital meter (the product is capable of getting humidity down to about 45% before it stops functioning). Perhaps due to the moisture being sucked out of the cushions and everything else, the boat has some capacity to absorb new moisture before a damp feeling intrudes. 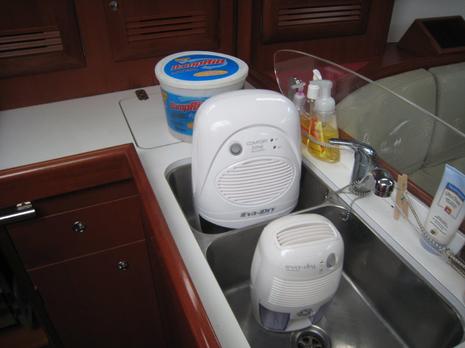 Comparatively, it takes a lot of DampRid to do the same job. I found it takes about six 4-pound buckets open on Breeze Pleeze to put a dent in the water removal capability of the smaller Eva-Dry and that’s just a dent. Those six buckets don’t remove as much as the 8 ounces per day by the smaller Eva-Dry 1100.

The June 2013 issue of Practical Sailor has an in-depth evaluation of wired and chemical dehumidifiers. One of the many highlights in the article is a table comparing products, which includes a column for cost per pint. The Eva-Dry 2200 is listed as $1.28 per pint compared to the DampRid at $2.24 per pint. In the table, the chemical based alternatives have nothing going for them performance-wise, except they don’t require power. In their review of the Eva-Dry 2200, PS explains the technology behind it and provides many tips for its use. For example, they suggest placing the unit on the stove and the power supply in the galley sink, precautions appropriate for leaving electrical devices unattended.

This type of dehumidifier utilizies thermo-electric / Peltier technology.  An electric current is passed through two dissimilar metals which transfer heat, and this causes the same effect that is used by compression technology. Although much less energy efficient than compressor dehumidifiers, there are many fewer parts making them effective for smaller areas like a boat, if you cut off the circulation to outside air.

The Eva-Dry 2200 cost about $95 and is available in versions powered either with DC (drawing a whopping 6 amps) or 110 volts (drawing less than 0.75 amps). On the surface, the 12v version is boat appropriate. However, the benefit of keeping with the 110 volt model is the assurance that if dock power is lost, the unit will shut down, rather than drain the house batteries.

– Dan Corcoran is an avid sailor and leads ServiceSPAN, a software and services company focused on finding and solving inefficiencies in the manual processes of corporate back offices.