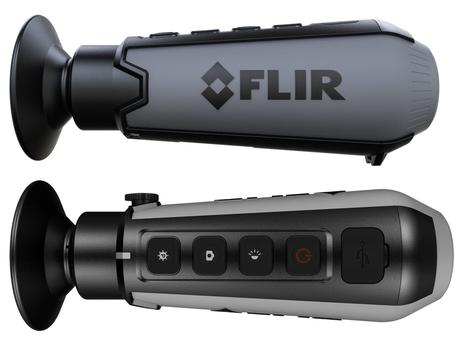 New this morning and shipping soon is the FLIR Ocean Scout TK thermal camera. It looks a lot like the existing and beautifully made Ocean Scout series, except that it is about two-thirds the size and half the weight. What’s really small, though, is the $599 retail price, which is almost one quarter what even the bottom-of-the-series OS 240 model costs. Now it’s true that the TK will become the lowest resolution Ocean Scout camera with the least range, but there’s a lot more to true thermal vision than resolution and range…

The reason that FLIR can produce a much lower cost Scout camera is the ultra-compact Lepton thermal imager they’ve been manufacturing in high volume for end products like the FLIR One personal imager, not to mention the nifty AX8 marine thermal monitoring system (which I’ve seen slickly integrate with Raymarine MFDs and will write up soon). The Lepton’s microbolometer (thermal sensor) has a resolution of 160 × 120, while the claimed usable range of the standard Ocean Scouts is directly related to sensor sizes ranging from 240 x 180 to 640 x 512. (See bottom of Specification tab here.) So if the TK had a numbered model name, it would be the OS 160, and potential users should probably adjust their range expectations accordingly.

However, I’ve also been meaning to write about how much FLIR has improved the effectiveness of the existing Ocean Scout cameras without changing the microbolometer resolution. What you actually see also has a lot to do with video processing, the little display built into the eyepiece, and various optional imaging enhancements. For instance, all the latest OS models use a 640 x 480 LCD viewing display, and that seemed to make the thermal imagery more realistic — and hence easier to understand — when I tried it on the water in Baltimore and Fort Lauderdale. And I especially liked the new InstAlert mode, which red highlights the hottest objects in a regular grayscale thermal image.

Well, darned if the low cost Ocean Scout TK doesn’t have most of the same features. The main one I notice missing is video output — especially useful for “poor boater’s fixed thermal” — but that only starts with the $2,999 OS 320. In the TK screenshots above you can see the often useful black-hot/white-hot polarity change feature, and below right is InstAlert in action. (And, by the way, I used “true thermal” in the title because unlike some “night vision” products, you’re going to see this imagery in pitch black.) The TK can also take screenshots and even videos, and I’ll bet it will be useful for troubleshooting heat-related mechanical and electrical issues (even if FLIR lowballs such use because they also make true thermography devices). Plus, I just don’t think that team FLIR has it in their bones to make a low cost product by cheapening the build quality or lowering their customer service standards.

So, yes, I’m bullish on the new Scout TK even sight unseen. But I’ll also get to see one in action tonight on Biscayne Bay and will certainly report back in the comments section. And, wow, tomorrow is shaping up to be a doozy in non-thermal recreational marine electronics. I’m hoping to preview two very interesting new products first thing.