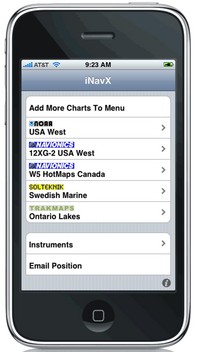 Wow, isn’t an interesting crowd of chart, map, and data suppliers gathering rapidly around the iPhone/multi-other-platform X-Traverse service?  I recently discussed the velocity of this and other iPhone-related developements, but was still surprised to learn today that Navionics is officially on board (Americas charts and U.S. Hotmaps available now, the rest of the world portfolio coming “in the next couple weeks”), that Hilton’s Realtime-Navigator fishing overlays will go up on X-Traverse in May, and that “agreements are in place with several other chart manufacturers to bring expanded coverage and choice (raster or vector).”

Make that pleasantly surprised!  This means that iNavX users have easy access to an amazing amount of cartography (or at least it looks easy, I’m getting set up to try X-Traverse myself now).  I’ve already seen how good Navionics charts look on the iPhone, and below are samples of Swedish charts, Trakmaps Canadian lakes, and Hilton sea temps. The X-Traverse service also means that in most cases this same cartography can be used with a subscriber’s MacENC or FugawiENC charting program, which can also share routes and tracks with iNavX.  (The significant exception is the Navionics data, which can only be downloaded to the iPhone, as Navionics distinguishes its Mobile chart products from the cards that can be used with computer programs and MFDs.)
The apparent success X-Traverse is having with map providers also suggests that it has developed very secure ways to protect their data even while serving it to multiple platforms.  This bodes well.  I hope to see lots more cartography available on X-Traverse, and understand that it’s also open to other charting developers (even though it’s part of Fugawi and GPSNavX is a founding developer).  Here’s wishing that companies like Navimatics, Rosepoint, Jeppesen, NavSim, etc. will at least consider becoming X-Traverse allies, or develop competitive services. My iPod Touch has shown me me how easy it can be (irritating exceptions aside) to have important chunks of the content I regularly use on my PC also available in my pocket, and I like it.