Though much of it was somewhat predictable, Garmin is bringing lots of good news to the Fort Lauderdale International Boat Show (FLIBS) tomorrow. The powerful operating system behind their premium GPSMap 8600 Series 17-, 22-, and 24-inch MFDs is coming to more affordable 10-, 12-, and 16-inch displays; new BlueChart g3 cartography with Navionics data integration and Auto Guidance will be preloaded in the new plotters; the inReach Mini satellite messenger will get a marine power kit and integration with many Garmin MFDs; and there will be more remote control and camera options to help create a particular boat’s optimal overall system.

But be forewarned that I only had pre-release product announcements and photos to work with as I tried to lay out the details below. However, Ben Stein is headed to FLIBS today to check out this (and other) new gear, readers may pick up on more details from Garmin’s newly live online product pages — I’m also on the road today — and all of these new electronics are supposed to ship in early 2019 if not sooner. Garmin’s GPSmap 8600 Series — which used to start at $7,500 — has been the flagship core of their bigger boat glass bridge networks, able to integrate all sorts of boat systems into clean yet potent helm stations. And while I don’t know if any smaller production boat will appear soon with the super minimalist 8616-centric cockpit seen above, it is getting possible and it will certainly happen eventually. For instance, these new 10-, 12- and 16-inch MFDs support the OneHelm integration we first saw in Miami, and the OneHelm list now includes Maretron and other interesting new players. 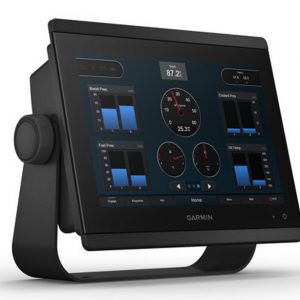 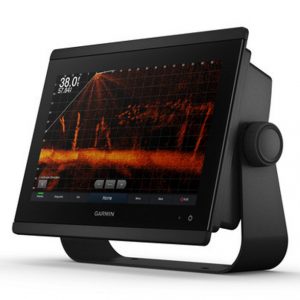 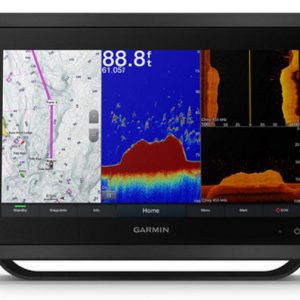 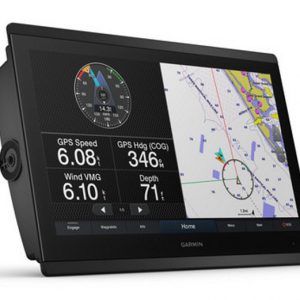 So while the photos above do not show all the many functions these new displays are capable of, do note the multiple forms of sonar that can be processed inside the xsv models that will be available in every new screen size. And while the photos are unfortunately low resolution, the new 8600 screens are all  HD 1920 x 1200 pixel IPS (in-plane switching), which should look great from any angle. And Garmin did supply high res backside images that suggest enormous connectivity and a mystery. 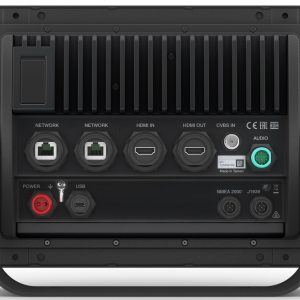 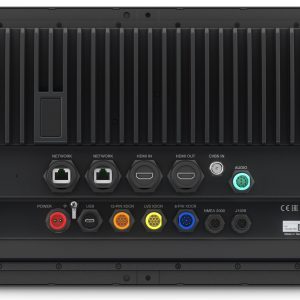 Even the smallest 8610 includes dual network ports that will mean a separate Ethernet switch isn’t needed on many boats. It also has HDMI input and USB ports that will hopefully allow the bright multitouch screen to work with PCs. Meanwhile, the CVBS video port is in addition to network IP and WiFi camera support and may mean that an attached analog cam is networked out of the MFD. Note too the diesel-friendly J1939 port alongside NMEA 2000.

But here’s the mystery: given that Garmin already supports control of Fusion and other stereos over N2K, what the heck is that 11-pin Audio port about? It’s hard to tell from the limited screens available so far, but the new BlueChart g3 cartography does look like a nice blend of Garmin’s highly readable chart display style with Navionics data and possibly other benefits.  And it’s nice that Auto Guidance is included in the preloaded g3’s, though I understand that it is not (yet?) based on Navionics Dock-to-dock autorouting algorithms. 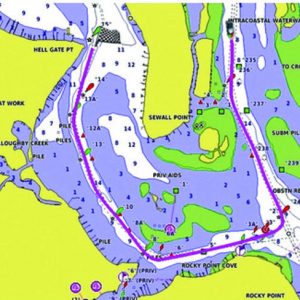 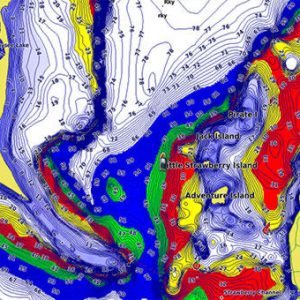 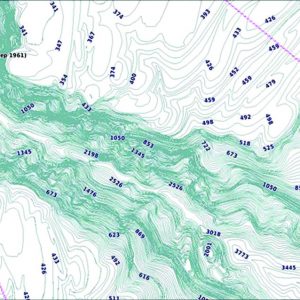 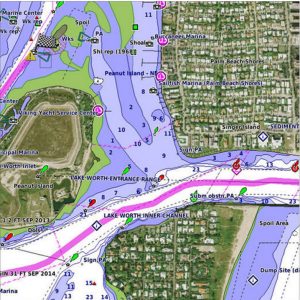 I am told that g3 fishing charts are a combination of Navionics’s SonarChart and NOAA bathy data while Garmin is still using QuickDraw Contours for their live depth surveying and sharing. How that all works and looks in real underway conditions, I don’t know, though the screens above suggest that lots of bottom detail is included. And, yes, there will also be optional BlueChart g3 Vision cards available with satellite imagery, aerial detail photos and unique 3-D views like FishEye. For years I’ve hoped to see the inReach satellite messenger and tracker integrate with marine displays, and that seemed even more possible when Garmin acquired the company. Now it’s here as the inReach Mini Marine Bundle and while the remarkably tiny Mini seems especially suited to personal use like hiking, I think that the 12v power mount and ANT+ connectivity to new and existing Garmin MFDs — 8600/74/7600 series, 7X2, 9X2, 12X2, 10X2 and 12X2 Touch — is going to be a big deal for many boaters. This is the only inReach/MFD interface screen I’ve seen so far, but imagine how useful it would be to have reliable two-way text messaging beyond cellular range on the bright main screen you use underway. And besides for the excellent tracking already built into the inReach ecosystem, couldn’t Garmin use this link to fill in more tracking/logging data like wind and temperature conditions? Multitouch navigation screens work better than many anticipated a few years ago, but I don’t think any electronics brand offers all the remote control choices that their customers may want for different types of boats and boating. And despite the big original GRID (Garmin Remote Input Device) and the diminutive Wireless Remote — both quite functional in my experience — Garmin didn’t offer the compact midsize remote that Raymarine, Simrad, B&G, and Furuno have all developed nicely. Well, the new GRID 20 seems to show how the last brand in can borrow the good ideas and add some new ones. 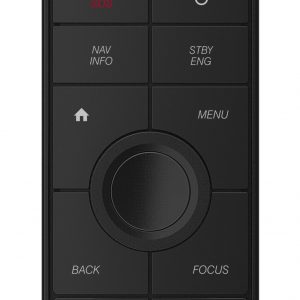 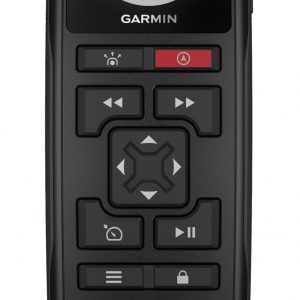 The $250 GRID 20 is available in both vertical and horizontal designs and can be wired to your NMEA 2000 network or connected wirelessly. When it’s connected wirelessly power can be supplied from a 9-32v power source or via 2 AA batteries for truly wireless operation. It also has four favorite keys that can “restore your system to a previously saved configuration.”

In a simlar vein, the new $250 wireless AP remote has the gesture control for heading hold and course corrections that Furuno first introduced with their Nav-Pilot 300, but also a color screen. The water-resistant floating case will be appreciated if the remote ever goes overboard. 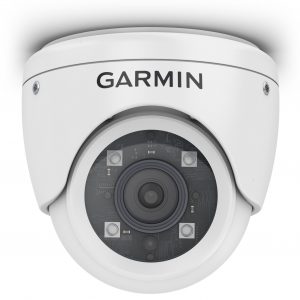 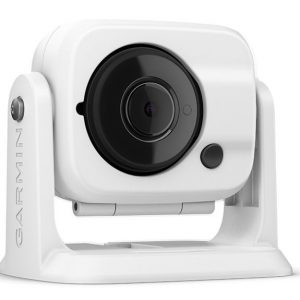 Finally, there’s a new $500 GC 200 Marine IP camera with especially flexible mounting options because  its image stream can be rotated 90, 180, or 270 degrees, and also reversed for a rear mirror style view. I’ll add that Garmin introduced the GC 100 WiFi camera last summer, and has long offered excellent MFD integration with their VIRB WiFi action cameras (which now includes a 12v power cable for the Ultra 30).

So what do you think, and what have I missed so far, pro or con? And what the heck could that new Audio port be about? PS 11/6: The mystery is solved. First, two intrepid Panbo readers discovered the new Audio/NMEA 0183 cable that is only compatible with the green Audio connector on the new 8600 MFDs, and then Garmin’s media department learned about a new multilingual voice alert function that had been left out of the marketing materials. So if the cable’s RCA plugs are connected to a stereo input, “instead of the plotter just beeping at the user and giving a visual prompt, it’ll say something like ‘engine alert’ or ‘MARPA target detected’ etc. over the stereo. These audio alerts are also translated per the language set up on the plotter.”

Additionally, Garmin says that the audio port may get used with streaming apps running on the new 8600 displays (like Raymarine Axioms can do with Spotify). That app feature doesn’t exist yet, but when it does, I imagine it will be able to turn down the music when the MFD wants to give you an audio alert, like good phones and automobile stereos can do these days.

Thanks for subscribing! We will keep you updated on the latest news in marine electronics
You are being redirected...