It’s a rare case when we actually get to see into some technology we use, and this is one. You’re looking at a special clear casting of the DownVü/SideVü transducer that Garmin designed for its GCV 10 CHIRP-based sonar. As the photo suggests — you can click it much bigger — there is much more to this tech then you might initially think. The long silvery bars (you can see two of three) are the ceramic piezo transducer arrays. The shorter one is for the down scan. The metal dot on the right side is the temperature sensor. In Garmin’s words “the DownVü and SideVü transducers were designed using an innovative multi-element shaded array to provide clear, picture-like imaging. The range and side-lobe performance is like nothing else out there.” This is not simple stuff. With today’s rapid developements consumer marine sonar is now nearly the equal of sonar systems owned by oceanographic research institutions, albeit with less power. The average boater isn’t doing seabed mapping at extreme depths, but hey if you mounted this transducer on a tow fish… 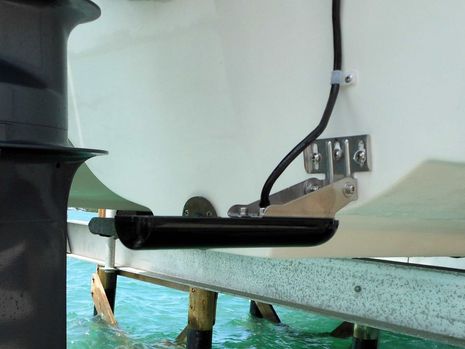 I recently installed a GCV 10 with the transom-mounted transducer and connected it to a Garmin 741xs. (I have heard a rumor that a new through-hull transducer is in the works and may be available this summer.) This was a straight forward plug-and-play exercise with no complications. It did require upgrading the 741’s software, and the SD update card to do this was in the package. Like all sonar products, and especially with down and side systems good transducer installation is critical to achieve performance at speed. The GCV 10 can currently be used with Garmin’s new 7xx, 8xx, and 1xxx series systems. Integration software for the 8000 glass helm systems is in process and will be released this summer. (Bill’s detailed entry on installing the GCV 10 here.)

The GCV 10 CHIRP’s in two ranges, 455kHz (low) and 800kHz (high). The actual CHIRP frequency sweep for the low range is 445kHZ to 475kHz and the high is 805kHz to 840kHz. In general the higher frequency mode will show sharper detail in shallow waters, and the resolution will fall off as the water gets deeper. This threshold between lower and higher CHIRP ranges is give or take around 200ft depending on conditions. Much deeper than than this, the 455kHz range will likely perform better. Frequencies can be mixed and matched. For example you can down scan using the 800kHz range, and at the same time side scan using the 455kHz range, as seen on the screeen below. 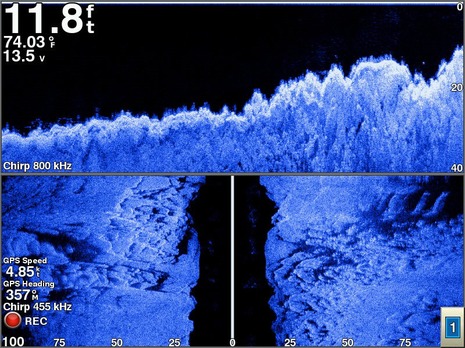 Power in a CHIRP system does matter, I think. The more energy you can put in a target, the stronger the return echo. It’s difficult to divine what the actual true power capability of many sonar systems are because manufacturers seem prone to using fuzzy terminology for transducer power output. Some use Peak to Peak measurements and others RMS wattage. It begs the question whether transducer output ratings are an aggregate of all of the transducer elements, or for each one.

Each of the three GCV 10 arrays outputs 500 watts rms each for a combined total of 1500 watts rms when simultaneously using both types of scans. This certainly places it at the upper end of transducer power output for existing scanning system, if not making it the outright current power champion. This advantage improves the ability to hold bottom at higher speeds in deeper water than other systems I’ve seen and definitely did a better job showing fish targets. I ran the boat at speeds above 35kts and the display kept up and maintained crisp imaging in both down and side scan modes. 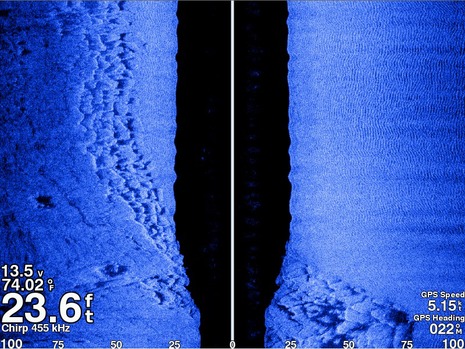 The various screen shots really tell the story. As you can see just above even the imaging while using the low frequency range in quite shallow water is terrific and there didn’t seem to be a lot of difference between the low and high frequencies to me. But as the water gets deeper the 800kHz CHIRP range will provide sharper detail compared to the 455kHz mode until somewhere around 200ft. The screen shows a ledge just off Pompano beach and the structure on the left side, and continuing on the bottom right is coral. If you look closely you can even see the ridges in the sandy bottom. 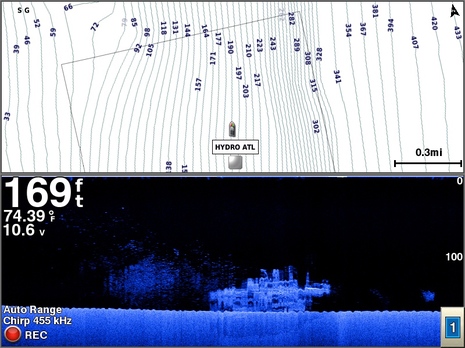 This Hydro Atlantic wreck DownVü screenshot was taken at 169ft during GCV 10 testing. The ship wreck is clearly visible despite two to three foot seas that caused the minor blurring. The really notable aspect of this image is how well the GCV 10 images fish. To the left of the wreck is a cloud of hundreds of fish. On the right side you can see what looks like a sizable bait fish ball.

The newer Garmin sonars now have the ability to record sonar streaming for later playback using Homeport software. Recording can be only be done on a single channel at a time using either DownVü, traditional, CHIRP, or SideVü modes. For the 741xs I was using you will need a SD chiplet inserted in the card slot for the recorded data. (Is there a better name for these impossibly small chips?) Garmin says for every15 minutes of sonar recording time you will need about 200MB of chip memory storage. Let’s make this easier, figure on a gigabyte per hour.

I do wish Garmin had included a way to export the videos in more user friendly mainstream formats for uploading to YouTube or the ilk. Poking around it’s possible to create sonar recording videos using Microsoft’s free Screen Recorder or other similar software. You can also mark waypoints using specific sonar features on the display by pausing the sonar, use the cursor or your fingertip to place the waypoint, and select New WPT. Waypoints can be added in a similar way while playing back sonar in Homeport also. 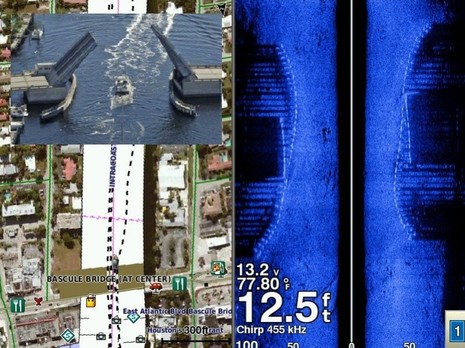 I think a new line in the sonar wars sand has been drawn, and Garmin as the latest to enter the fray has no doubt taken advantage of the lessons learned by others. What I found was simple implementation, easy to use, very fast image processing, sharp bottom displays and a strong technical sonar entry. The screen shots will tell more of the story as time goes by, but I really liked this system and only had some minor gripes about the MFD user documentation. 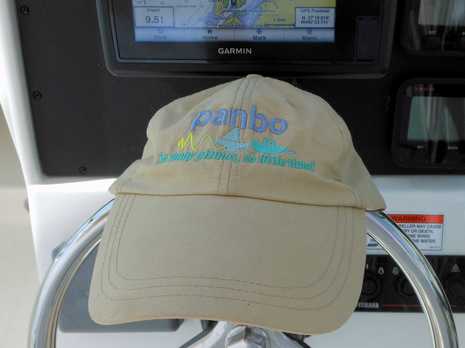 Same famous Panbo hat, just a new voice that will on occasion be wearing it. All of the GCV 10 screen shots seen here are courtesy of Garmin International.