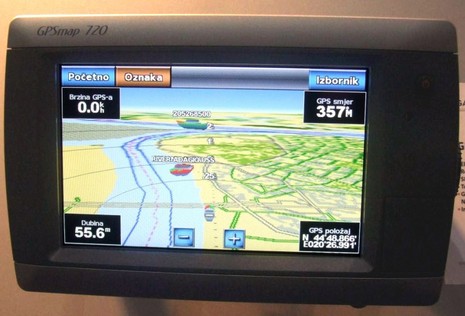 Just yesterday, in my blogging birthday post, I commented on Panbo’s international reach, and today I’ve got some interesting evidence (and more tomorrow).  That shot of the new Garmin 700 series above was recently sent to me by Petar Maksimovic of Info Team, Garmin’s Serbian dealer.  And there’s more of interest on that screen than just the language.  Info Team has been working for nearly a decade to create Serbian road and waterway maps under Garmin’s MPC system, and says that its latest SCG RoadMap includes official Plovput data for about 1,600 kilometers of rivers and canals.  Apparently that effort was not only an innovation for inland Europe, but also helped Info Team create a market for marine electronics.  In fact, the company demonstrated some gear at the recent Belgrade Boat Show that may not have been seen right here in the world’s largest ME market yet, as Petar explains…

“The Serbian distributor of Honda engines, Elko Marine, managed to obtain license from the inspectors to run outboard engine indoors occasionally, to present ‘digital gauges’ on NMEA2000 devices. Chosen engine was new Honda BF60,
and chosen display was Garmin GPSMAP 4008 due to it’s portability yet
large screen and VGA output (to present it on larger plasma display).
Beside 4008, we also connect smaller GPSMAP 421 to see if there are
difference in presented data on this portable plotter.
Latest software update was needed to get all readings properly, it
was done easily on both 4008 and 421 networked on N2K from one SD card
inserted into 4008, real simple, as all updates were in one file
downloaded from garmin.com. GPSMAP 4008 read slightly more engine data,
organized in ‘Engine dashboard’ page, and GPSMAP 421 access similar data
through ‘Fuel page’, or display them as number values on map page:
tachometer, trim, fuel rate, fuel economy. Both devices failed to
display gearbox information (F-N-R) and oil pressure, which is available
when Garmin’s GMI-10 is connected on Honda engines, together with
Honda’s ‘ECOmo’ display.  It was interesting to learn that power has to be introduced to NMEA2000
bus to get data flowing, even though it looks like Honda interface cable
introduces power to the bus similar to what Yanmar engine does.” 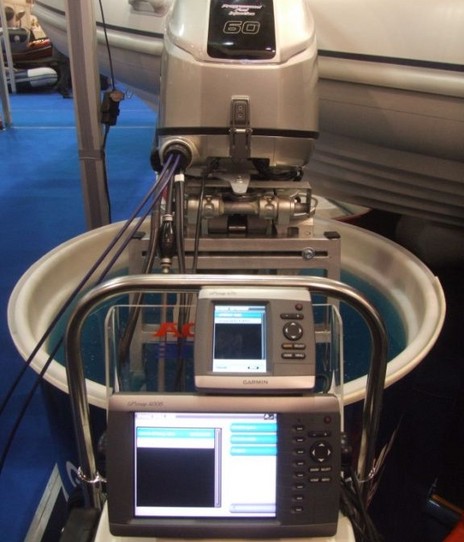 “Another interesting electronic setup was at our Garmin
stand, where there was huge NMEA2000 network on display:  six Garmin GPSMAP
plotters (new 6 & 7000 series, 720 etc…), wind sensor, VHF200 and
AIS 600 networked on same bus. Focus was on use AIS as new “safety
gadget”, as there is an Inland AIS implementation project ongoing in
Serbia by local waterway authority Plovput.  The new Garmin Class B transponder with NMEA2000 was powered up,
and connected to VHF antenna, sending data over NMEA2000 to all
connected Garmin GPS plotters on stand. There were no transmitting
because everything was inside, without valid GPS fix available, so AIS
600 was working as a receiver only. 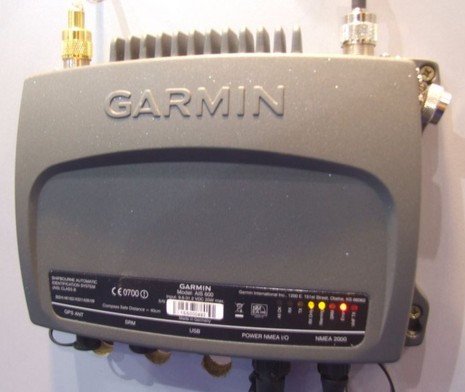 I’ll close with a sample of an Info Team river map, a thanks to Petar, and a note to all:  Next week Garmin is kindly bringing me out to Olathe, Kansas, for a tour and a chance to meet some its marine team.  If there’s something in particular that you think I should look into, please let me know in the comments below, or by email (ben dot ellison at panbo dot com). 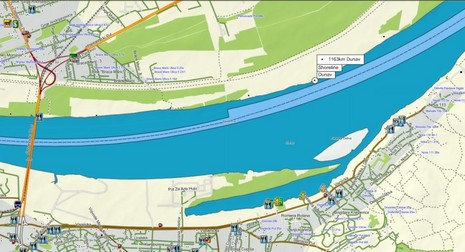