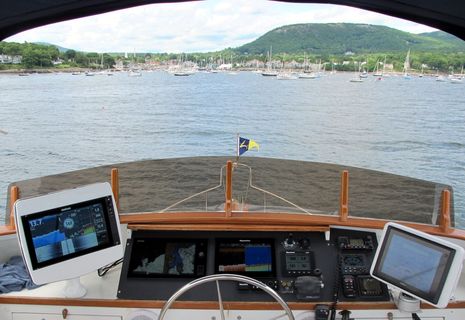 Now we’re talking. Gizmo’s flybridge feels like the starship Enterprise now that the Simrad NSS16 evo2 is installed in its Seaview Power Pod and the Garmin 8212 has been moved closer to the helm since I first discussed the 2014 glass bridge install. Recent visitors tended to break into giddy laughter, but the marine electronics horsepower at my fingertips is truly phenomenal. In this scene, for instance, I’m exploring a dicey area of Camden outer harbor — hence the lack of moorings — using StructureScan and medium CHIRP sonar on the NSS16, CHIRP DownView and sonar on the gS125, and EchoPilot FLS via the Garmin’s video port. Today’s subject, though, is about how and why I selected the particular gear I hope to test and compare for quite a while…

Specifically, is it fair to compare that big Simrad NSS with the Raymarine and Garmin 12-inch models when there is an NSS12 evo2 available? My first rationale was practical as the 16 was supposed to be available a month before the 12. In fact, I didn’t receive the 16 until recently because the initial run purportedly sold out quickly (and a guy trying to borrow one long-term should rightfully go to the bottom of the list). But as I built a spreadsheet of unit specifications, mainly to figure out how to fit all these screens at the helms, I added the suggested retail prices and realized that the NSS16 seemed similar to the Garmin and Raymarine 12-inch models, especially as it includes built-in CHIRP sonar and StructureScan processing (or ForwardScan, when it arrives) plus 10Hz GPS. (I’ve since learned that you can’t run CHIRP and SS at the same time, though both work fine if you put the sonar on a single frequency, and the limitation is in the manual according to a patient Navico tech support guy 🙂

But, man, I get nervous discussing prices. They can change overnight (major radar example below); there are all sorts of packages and other discounts, and it’s hard to factor in needed cables, etc. The ultimate cost of ownership should include installation, repairs, durability, and more…and the calculation is rarely consistent owner to owner. Usefulness versus hassle, pleasure versus pain, can vary dramatically with the same gear used on similar boats for similar purposes. It bothers me, for instance, to list the Furuno TZT14 at $7,695 because I know it was subject to a colossal $1,500 rebate for most of this year and that may happen again (the rebate hinges on the exchange rate with Japan, I’m told). The TZT would also seem less expensive if the comparison was by weight, which suggests the extreme durability Furuno is famous for. {11/11/14: Furuno just dropped price of TZT14 by $2000 to $5,695! Other TZT and NavNet MFD models also much lower now.} 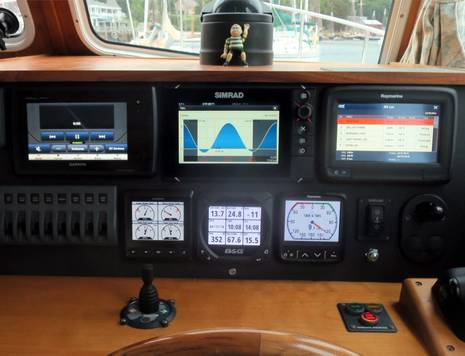 At any rate, I hope the dimensions and so forth on my spreadsheet are useful to other boats trying to make decisions, but please treat the price information carefully; there’s a bigger picture. But that said, it does look like the new Simrad NSS line is a good value, though the differences get fairly minor down at the 7-inch screen level. Incidentally, even though these MFDs commonly go by themselves on smaller boats, I think of them as part of the whole do-it-all glass bridge concept because they can also serve as they are in the scene above. They have the same clean touchscreen style, they’re networked every which way, and the tasks they’re taking care of here are typical of a larger boat at anchor. You might want one of these MFDs next to your berth, which is one reason why Raymarine’s huge a- and e-Series model lists are noteworthy. 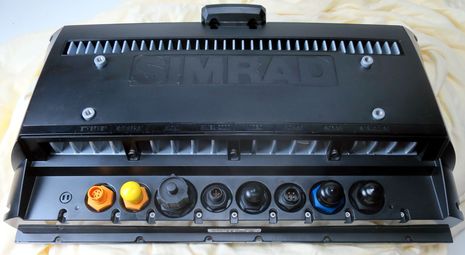 I did notice a few small ways that Simrad is keeping their manufacturing costs down. If you download the install manual, you’ll see that the only cable included is the power cord — no NMEA 2000 (or SimNet) drops and no proprietary video or Ethernet cables. The dust caps you should put over unused ports are now soft friction-fit type, except for the turn-and-lock one over the HDMI output. But I quibble, and who else offers HDMI output anyway? I guess the concern is if they used some cost-cutting internal part that will cause trouble later, but so far both large and small NSS are performing very well, including what is essentially evo2 software V1. One possible bug I just encountered is corrupted screen shots on the 16, but even if that hindrance is real, I’ll share what I’m finding soon.

One of the last installs I’ll do before heading south is a Garmin 24 xHD radar, and my rationale for borrowing that instead of the 18-inch high performance model –like the other three, though the actual dimensions vary — was the same as with the NSS16. Without a size constraint, a boater could have a Garmin 24 for about what it cost to get the competitor’s smaller radome. But that was a few months ago, before Raymarine cut the price of their RD418HD by about $700 (if my research is correct). So it goes.

The truth is that Garmin’s original 24 HD radome didn’t do well against the 18-inch competition in my 2009 testing, so it will be news if they’ve caught up on features and performance. And that’s what I’m expecting, as one general impression I’m developing while working with all these MFD systems is a nice level of parity. They’re all darn good. And I think they all have the hardware, software, and R&D team horsepower to keep improving existing features and adding new “functions” for some time. I look forward to drilling into the nuances and making comparisons and suggestions, hopefully with your participation.

But marine electronics isn’t all about the Big Four, though possibly more than ever. There are all sorts of sub- and standalone systems that can help us in ways that probably aren’t even on the big boys’ roadmaps yet. And I feel a bit remiss that Gizmo hasn’t met a Humminbird Ion yet, though it’s not quite at “glass bridge” level. But there is a little room and a few unused power and data ports for interesting displays like the Standard Horizon CPN1010i below, whose chartplotting looked good even next to the TZT and which can still do things the others can’t. More to come. 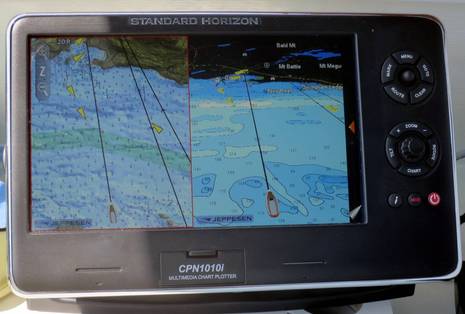