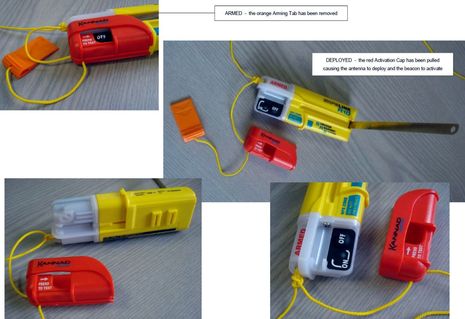 Kannad Marine’s SafeLink R10 SRS (for Survivor Rescue System) just received FCC approval, and it’s about time given that this personal AIS SART was introduced in Miami more than a year ago!  But let’s give Kannad a break as getting innovative safety hardware like this through the approval process is not trivial. Just skimming through all the documents filed with the FCC was an eye opener, and the company had already spent many months (and dollars) getting EU approval.  Before discussing those details, though, let’s look at how easy-to-use yet capable the finished product is. The collage above illustrates the activation process (click on it for a bigger image) and I personally love how a bit of cord is rigged both to keep all of the R10 attached to your life jacket or clothing and to remove the orange Arming Tag and the red Activation Cap in two quick motions. It’s also key to the automatic activation possible when the four ounce R10 is “professionally fitted” to certain inflatable life jackets (as detailed on Kannad’s R10 web page…

Note too the “Press to Test” label that shows when the Arming Tab is removed but the Activation Cap isn’t. The ability to fully test this person overboard device is one of its great features, I think. As shown in the manual below, a 1 second button push, recommended monthly, will let you know how well the 7 year lithium battery is holding up. But a 10 second button push will actually fire up the internal GPS and send out a test message on the AIS VHF frequencies, which is important as very few of us are familiar with how an AIS SART will display on our boat’s AIS plotting system.
As I learned when I tested an easyRescue AIS SART (not yet available in the U.S. Correction: easyRescue also earned FCC approval, first in fact, see comment below), all AIS plotters will see the SART target but some do much more, like using the correct icon, popping up an alarm, and setting up a return-to-MOB waypoint. This will get better as MFD, charting software, and AIS developers adapt their products for what may well be a very popular safety device, and there are already accessories like Digital Yacht’s LifeGuard specifically designed to set off visual and audio alarms if an AIS SART message is received.
I also hope that some enterprising boaters will test the range of these devices in realistic conditions. The specification is 4 miles if the receiving antenna is at least 15 feet above sea level, but how you position the R10’s antennas and the sea state have to be critical factors when you consider what’s going electronically. A GPS that has no idea where it is has to acquire a fix while possibly being rolled and splashed, or worse, and a VHF transmitter has to get off 2 Watt bursts of digital data. Remember, though, that the data burst is cleverly designed to overcome interference from large waves, as we learned when commercial level AIS SARTs were introduced, and the details of this personal size version have been extensively worried over and tested, to say the least… 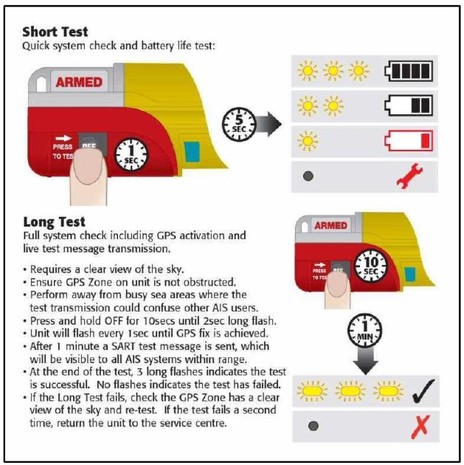 But before I get into the FCC approval aspects of this new safety device, let me note that
West Marine is offering the Kannad R10 for $320

and, unlike other AIS gear, there’s no paperwork delays involved as AIS SARTs come with a special MMSI already programmed in.

Now, for those of you interested in how stuff gets to market in this world, contemplate the documents involving the R10 approval process you can download at the FCC site (the search shortcut is Applicant “Orolia” — Kannad’s parent company — and Equipment Class “AIS”). Some of those test reports are over 100 pages, and must have been darn expensive. Not to mention the document costs of the multiple standards involved, and the engineering. And some of the dating suggests that the whole process from fully developed product to actually being able to sell it here in the world’s largest marine market took almost two years. I’m sure that some of the complexity and slowness is bureaucratic inefficiency but on the other hand  this is a process that ensures the integrity of a critical system like AIS and also ensures consumers that a critical safety product should work as advertised. Hat’s off to Kannad for making the investment! 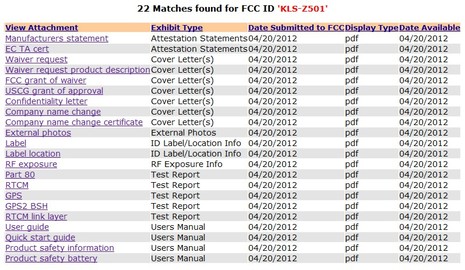