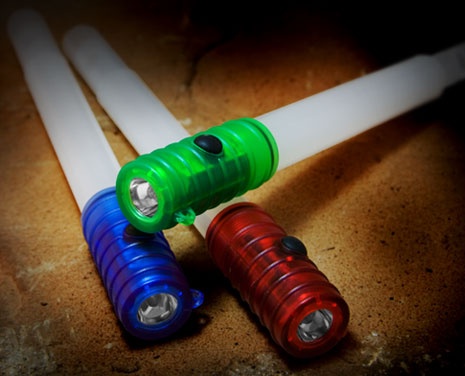 As much as it bugs me that 34 out of 35 sailboats in the Northeast don’t use radar reflectors, I am entirely willing to cut us all some slack for not using navigation lights on dinghies and tenders. But while a serious nav light install is hard to pull off on small boats, I’m having surprisingly good luck with the inexpensive 200 Hour LED Glow Sticks pictured above…

The USCG regulations, page 28, state that if your vessel is less than 23 feet in length and its maximum speed does not exceed 7 knots, then it may display an all-around white light and, if possible, sidelights, instead of the lights prescribed previously (e.g. typical steaming and nav lights). Ever try to do that, put up an all-around light like an Aqua Signal Series 23 in your dinghy or tender?  Blinded, yes?

It doesn’t take too long to realize that what works better is a flashlight you can just shine at any approaching vessel or your vessel to increase visibility, and when you’re not doing that, the flashlight is then available to shine ahead to see where you’re going. There are, of course, downsides. My night vision is trashed by any flashlight in my own boat, not to mention when another boat flashlights me attempting to figure out what direction I am going in.

What I have been going with instead is a flashlight at the ready and the nifty Life Gear 200 Hour Glow Sticks pictured at top as navigation lights. They come with lanyards that are easy to attach to the tender; their batteries purportedly last for two hundred hours, and they’re surprisingly resilient to salt-water and UV light.

I say surprising as I had not expected a whole season out of them, but I am now into season two. At $5 each — at Home Depot, for instance, or by the 12 pack at Amazon

— I have a set of three including a red & green pictured below, and blue/white light attached to my engine as a stern light. 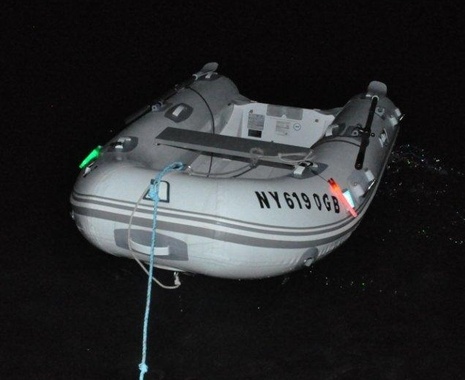