Maretron FFM100 fuel flow monitor test (part 1), as good as it gets? 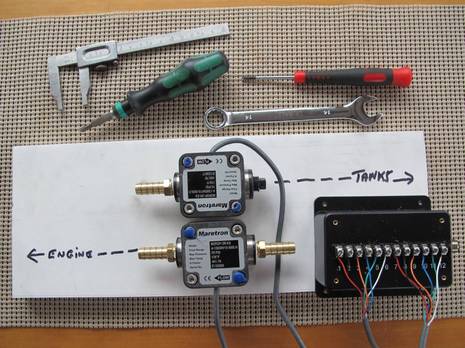 When I first wrote about Maretron’s FFM100 fuel flow monitor, I was enthused about both its advanced sensor technology and the possibilities of a system designed from the ground up for NMEA 2000. Now that I’ve installed the system on Gizmo and tested it a bit underway (before the weather closed in), I’m even more impressed. But I have also learned how difficult it can be to accurately measure how much fuel a diesel actually uses in real time… 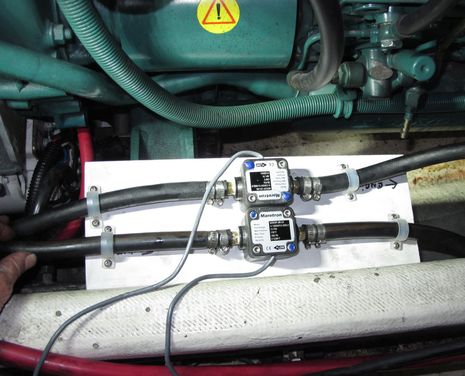 I was apprehensive about cutting the fuel lines to Gizmo’s one and only engine, but in fact the hardware install was quite straightforward. The flow meters themselves are small and there’s no need for in-fuel-line accessories like return coolers or pulsation dampers. But you are required to mount the sensors so that their twin “positive displacement” volume measuring rotors — as opposed to a flow speed measuring inline turbine — have their shafts parallel to the water surface (manuals here). Thus that white Azek PVC board ended up screwed to the inside surface of the engine stringer.
I also had to source the nipples (from Racor) and I wished the sensors were surface mounted instead of being bolted from behind, but those are trivial issues for the pros who would normally do this sort of install. In fact, some Wayfarer Marine techs checked out my finished setup and seemed quite impressed with Maretron’s simple and compact system design. 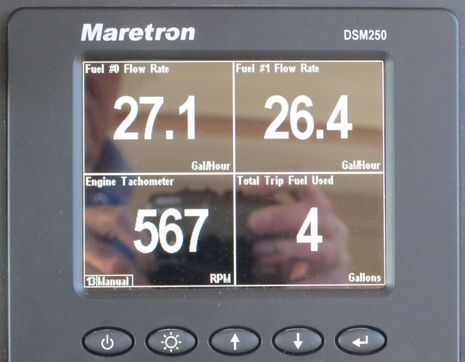 One interesting feature of the FFM100 black box is that it can handle the two flow sensors in independent or differential modes. So what you’re seeing in the two top data boxes above are the independent fuel flows into and out of my 450 horsepower Volvo Penta, and — HOLY COW! — look how much diesel is running through even at dead idle – 567 RPM (and no load)! Maretron carefully warns that while an independent meter is accurate to about 0.25%, diesel differential mode adds a significant error factor.
You can probably intuit the problem from the screen above, though a video would be better as you’d see how the flow rate numbers “jiggle” (even nearly 30 gallons an hour or 0.5 a minute is hard to measure consistently in two second intervals). Consider that what you’re really trying to measure is the approximately 0.7 gallon actually being burned, and you realize even tiny errors in or out get badly compounded in this situation. Maretron estimates that most diesels only burn 25% of the fuel supplied — which seems about right given that my preliminary max speed rate is about 19 of the 53 gallons coming through (ouch) — but the idle burn percentage shown above is about 2%.
I don’t know if other engines are like mine at low RPMs, and as I’ll discuss further down, I’m pretty sure that the Maretron system is doing well even with what may be its extremes, but doesn’t this illustrate how difficult it is to measure diesel fuel burn rates? On the other hand, I was also pleased to learn that even at low speeds Gizmo’s fuel is being run through the filters at a fairly high rate, and I’ve already used independent mode’s Trip Fuel Used to perfect my technique of trimming ship by using the fuel return valve to move diesel from one tank to the other. 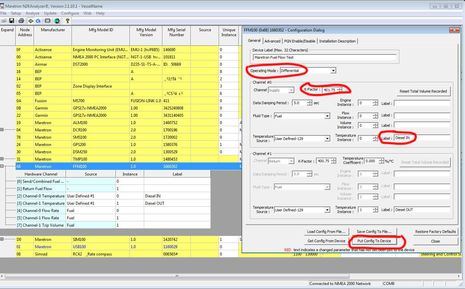 Above is a Maretron N2Kanalyzer screen showing FFM100 calibration details, all of which you can also do on a DSM250 or 150 display, though not as easily. Because there’s a lot going on even if you click it bigger, I highlighted several areas of note. The first is where I’ve switched from independent to differential mode, which is why many of the Channel #1 values are grayed out; the FFM is taking in the measurements of two sensors but outputting only one flow value. (Incidentally, this same hardware setup could measure fuel flow for two large outboards and has a retail cost of $1,385 for the mid-size sensors. Maretron has various well documented FFM system examples here.)
The second highlight is a bit of magic called the K-Factor. I don’t know what the “K” means, but Maretron puts every sensor through an actual flow test and prints a calibration factor on its label (and if yours truly had read the manual about inputting the K-Factor during installation, I’d already have more valid testing data to share :-). Highlights 3 and 4 are somewhat extraneous but suggest how a label typed into the configuration can be useful elsewhere once you “put config to device”… 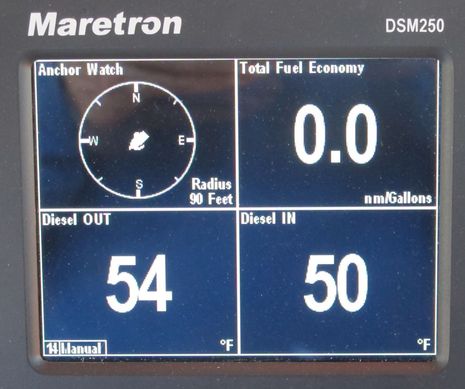 When I slapped together a DSM250 screen to illustrate the FFM100’s ability to also measure fuel temperature, those labels were quickly available even though the PC was shut down (a nifty feature throughout the Maretron line). In fact, I think I’ve already changed that screen again because I can’t think of why I’d want to know fuel temps. The real point is that though fuel volume and hence, measured flow changes with temperature, the FMM100 can and does correct for the differences. And I guess the screen also shows that fuel economy — the precious calculation of differential flow versus SOG or STW (speed through the water) — is zero when the boat is tied up. 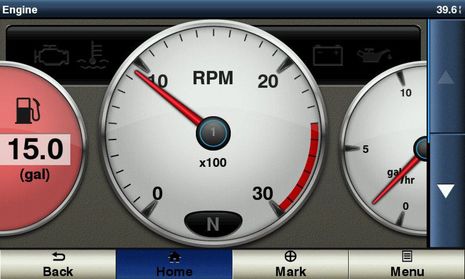 Finally, though not surprising, it was nice to see the FFM’s flow values show up on various NMEA 2000 displays around the boat, including the Garmin 741 above (which just got an amazing software update). As with the Actisense EMU-1 that’s getting that RPM value out of my mostly analog engine, I’m becoming persnickety about virtual gauges. For instance, I’d like more tick marks on that gal/hour dial to the right (which is why I had its range set to less than Gizmo’s WOT burn). But serious display testing will have to wait until spring, as will any further efforts to figure out if the FFM100 is truly accurate.
I did get in one test trip after I applied the K-Factor, and the general results were surprisingly close to the numbers collected when Pat Ricci plugged his special Volvo Penta software into my ECU while we ran RPM scales. I published that graph when first discussing the Maretron FFM100 (and also the uncertainty of engine generated flow rates). But there were unfortunate aspects to the November trip – it was rough, the flow and economy numbers were jumping around, and I was alone. The results were just preliminary, but I did notice how the miles/gal changed depending on Gizmo’s relationship to wind and wave, which is just the sort of info that can make the system worthwhile.
And just before hauling the boat I realized I could get easier to record and quantify results by setting the data dampening period to 5 seconds (see config screen), which I tried out at the dock. I believe that one of the first things experts look for in instrumentation is linearity, and isn’t that pretty darn good linearity shown in the graph below. It’s a limited sample, but it’s also in the range where the FFM is trying to measure a tiny fraction of the fuel both sensors are seeing. I’m looking forward to spring testing of course, but maybe as much to sharing some major Maretron product news in a day or two.