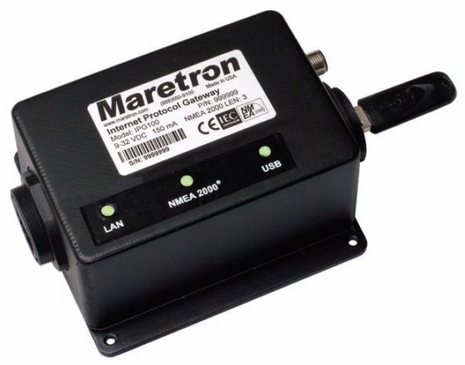 Wow, Maretron just released the IPG100, an “Internet Protocol Gateway” that can take all the NMEA 2000 PGNs on a backbone, turn them into TCP/IP data packets, and serve them out an Ethernet port.  Which means of course that the data can then be routed by cable to a vessel’s local network of computers (and other fixed Ethernet gear) and by WiFi to an infinite assortment of onboard mobile tablets, apps phones, etc.  Obvious too is that an IP gateway could also be adept for sending data off a vessel, and commands back, for remote monitoring, troubleshooting, and more.  And Maretron’s IPG100 consumes only 0.5 amps of N2K backbone power at most and its $595 price tag includes much more than I’ve already described.  Or possibly much less, depending on your point of view!…

If you check out the data sheet and manual you can download from Maretron’s IPG100 product page, you’ll realize that the little box has enough computing power to run the server portion of the company’s N2KView monitoring and control system, and thus the IPG100’s USB port is meant for the dongle that enables N2KView’s floating license scheme.  That make’s the IPG a powerful component.  All of a sudden an N2KView boat doesn’t need to have a PC running all the time to receive data via Maretron’s USB100 either for display or distribution elsewhere.  Now you may well want a PC display when underway, but maybe switch to N2KView on your iPad when you’re anchored and hanging around the salon, and then maybe to N2KView on your Android phone when you go ashore.  With an IPG100 all that can be done with just the power it takes to run your boat’s N2K backbone and a single N2KView license  (as long as only one of N2KView client app is running at once).
And while a basic N2KView system is now down to low power and about $1,100 — which gets you one IPG100 plus one license plus whatever PC, iOS, and Android clients you want — Maretron has added more interesting options for extending the system.  There’s the new MBB100, a $1,295 fan-less black box computer dedicated to running the N2KView client, and the new DSM800, a touchscreen all-in-one also dedicated to N2KView.  Plus Maretron keeps adding sensors that expand the monitoring and control N2KView can do, like the versatile FPM100 fluid pressure monitor, and I know more are coming!  Maretron has been focused on this whole N2KView idea for a long time, a little taste I got last fall suggested how far it’s come, and there is no end in sight.
But here’s the rub:  As far as I can tell, the IPG100-based N2KView system has no provisions for sharing IP data with other applications, even though the data starts out as standard NMEA 2000 PGNs, a standard Maretron has supported nicely for all these years.  I can’t help but think that a boater who invests in some subset or superset of the system diagrammed below isn’t going to be unhappily surprised to find that, say, the PolarView and PolarCOMM programs running on that laptop can’t get at the GPS, depth, wind, etc. data that’s flowing into it via Ethernet cable or WiFi.  And won’t that dissappointment get worse when, say, a sunlight readable, truly multi-tasking Android tablet shows up?
Now it happens that I heard about the IPG100 late last summer and made the case to Maretron brass that some users will want access to the IP data for other uses, and I believe they were interested, if not sure how it could be done.  They were also apprehensive about the drubbing they might get from some Panbo readers.  So it might be useful if some of the IT types out there suggested ways that data flowing through an IPG100 can be shared with other apps without compromising the integrity of the gateway or the overall N2KView system.  And let’s be nice and recognize that Maretron is building quite a flexible, if closed, system here.  And if you’re not interested in N2KView, know that we should soon see at least one N2K-to-WiFi gateway — from Chetco Digital, documents purportedly in the works now — and I believe there will be more choices in the fairly near future. 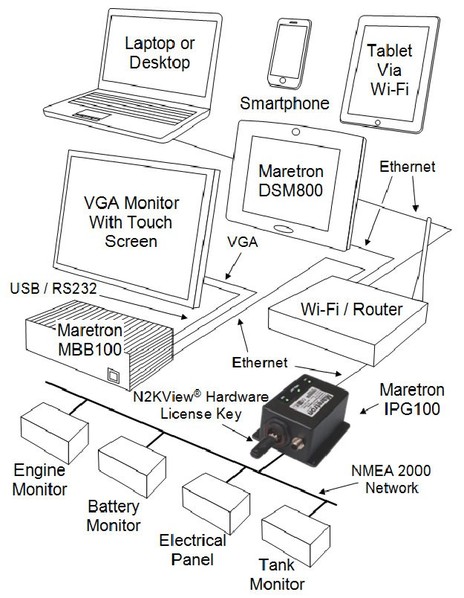