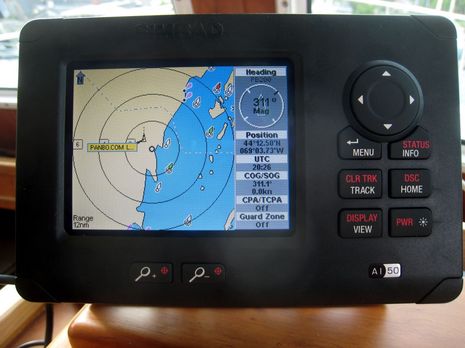 Yesterday I fired up this sample Simrad AI50 Class B AIS transponder and found it to be pretty much as self-contained and impressive as I’d hoped.  I attached one of my boat’s VHF antennas, deployed the AI50’s included GPS antenna, gave the unit a little 12v juice (just 8 watts at 100% screen brightness), and, voila, Gizmo was transmitting its position and plotting other AIS targets, including another Class B I had set up as “Panbo.com Lab”.  A full AI50 entry will follow, but first I’ll report on its SimNet/N2K output.  I was excited about how easily NMEA 2000 could feed the AI50’s target and GPS info to all devices on the network, but nervous about that how well 2000 currently handles the data (nobody has yet tried it much). Both feelings were justified…

It was trivial to tee a SimNet-to-DeviceNet patch cable from the AI50 into Gizmo’s N2K backbone, but the results were quite disappointing.   As you can see from the above photo, the AI50 understands the pesky “Class B CS Static Data Report” — i.e. Message #24, added to the AIS standard after its initial release (though discussed here over two years ago)  — but that info did not get to the Garmin 5212 that’s currently on Gizmo’s fly bridge.  In other words, the Garmin saw the Class B “Lab” target fine via N2K, but never received the name, call sign, etc. message it was sending out every six minutes.  And I don’t think that’s Garmin’s fault, because when I had N2K Analyzer monitor the AI50’s data output (below), I never saw a Class B Static Data PGN.  (Another bummer: the Maretron USB100 does not translate N2K AIS messages into 0183 AIS messages.)  Plus, when you select the AIS category in NMEA’s nifty new online PGN database, it’s not listed there either (check Brian Lane’s full AIS message list for comparison).  Could it be that NMEA hasn’t caught up yet, and therefore no N2K AIS transponder or receiver (they’re coming) can yet deliver Class B static data?  Sheesh!
And there are other issues.  Note below that the AI50 is only sending out two basic GPS PGNs, no satellite status or other secondary info.  Which is similar to what Class B’s do via NMEA 0183 (the subject of recent discussion), and has mixed results.  For instance, the Garmin offers the AI50 as an alternate GPS source, but if selected then alarms you that it’s “Lost Satellite Reception” (even though the AI50 is receiving GPS fine).  Doh!  An AIS engineer recently explained to me that Class B transponders only output limited GPS info because more data might interfere with a high volume of AIS target data trying to fit itself into a 36,400 bps NMEA 0183 pipe.  But NMEA 2000 doesn’t have this bandwidth limitation, and thus N2K Class B output should include all GPS info so that any device on the network can use it for primary or backup positioning. (Or, better yet, let the user/installer decide.)
There may also be a problem with a vessel’s own N2K Class B data… 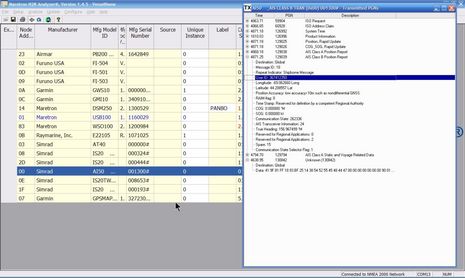 In NMEA 0183 format your own vessel info is segregated from regular !AIVDM target
messages as an !AIVDO message. But in 2000 format, your own vessel
seems to be treated as just another PGN 12039, as Gizmo is in the
screen above (that’s my own shiny new FCC MMSI).  This would explain why
the Garmin was plotting Gizmo’s own transponder as a dangerous target a few yards away, seen below (the two highly accurate GPS’s involved were separated about as shown).  This may also explain why the Lowrance HDS, also able to do AIS over N2K (I think), has a place to enter your own MMSI (I’ll try it for sure, but that sounds like an easy way for an MFD to identify its own vessel as such).
But there is some good news in these two images.  Note how the Simrad AI50 automatically picked up Gizmo’s heading from the N2K network and included it in the boat’s AIS message. That’s why the Class B target below is one of the first I’ve ever seen that is pointed in the right direction even though the boat is not underway (tied up at a good watering hole, actually), and therefore lacks valid COG.  In fact, both the AI50 and the Garmin are both getting heading info from the Airmar PB200, with little effort on my part, which is a good example of NMEA 2000 doing what it can do so well.  N2K could also do a great job of networking AIS data, but it seems like the NMEA and the manufacturers haven’t yet gotten the details right. 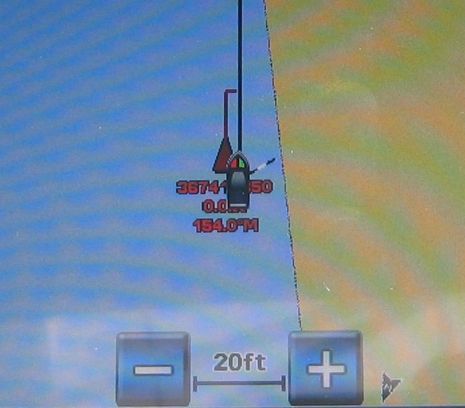