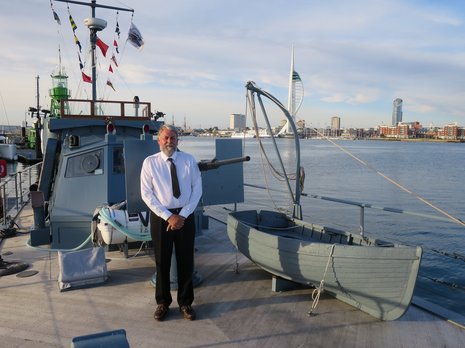 There’s much to report about my three day visit with Raymarine’s impressive product development team, but the impromptu kicker was a visit to HDML (Harbour Defense Motor Launch) #1387, and the vessel’s key story couldn’t be more timely. 70 years ago yesterday, well before D-Day H-Hour, 1387 headed toward Normandy loaded with electronics that helped her crew precisely mark the planned final channel to Omaha Beach, first for the minesweepers and then for the vast fleet of landing craft that left Portsmouth behind her. And today she’s headed for France again, this time with an all-volunteer crew led by Alan Watson, the gentleman who so kindly showed me around last evening. 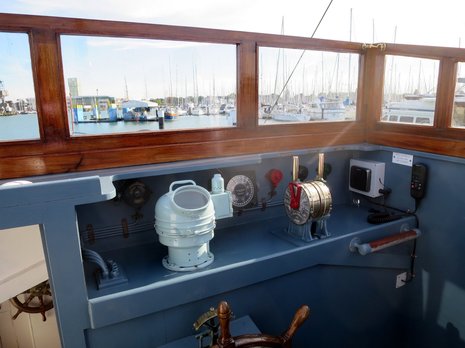 There’s a good basic history of Medusa at National Historic Ships UK and much more detail at The Medusa Trust. Though still considered an honorary member of the Navy — thus the honest HMS designation and today’s visit by Princess Anne — the vessel is actually cared for by a small support group. During her last major refit (done largely by student shipwrights), they strove to restore the original HDML configuration but with a willingness to mix in modern equipment to keep her safely operational. So while the rudder angle indicator visible behind the wheel is entirely mechanical, tucked in the corner is a modern DSC VHF supplied by sponsor Raymarine, where Alan Watson also serves as the radar and navigation trainer. 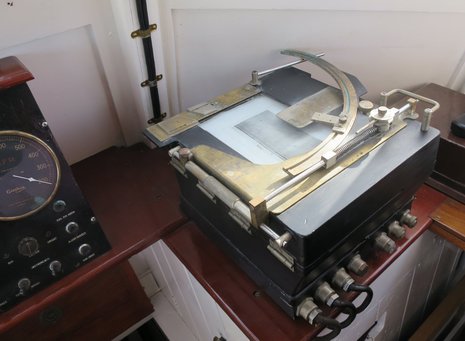 Apparently, it’s mainly Watson who’s scavenged examples of Medusa’s D-Day era electronics, like the ASDIC sonar seen mounted in the wheelhouse above. As explained here, this was actually what we call Forward Looking Sonar, though at a very low frequency with paper and audible output mainly useful for spotting submarines. The various brass appendages comprise a mechanical computer that helped time the release of small depth charges that were literally rolled off the side deck of the HDML. The ASDIC could also be used in passive mode to detect pings, and that was critical for the D-Day mission as a seabed acoustic beacon had already been dropped at the edge of the mine field where Medusa was to stand station for 36 hours. 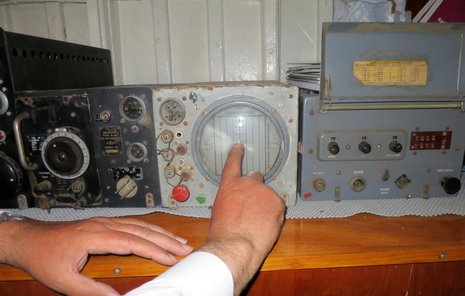 Medusa also had two forms of LORAN-like electronic position finding which are explained here. The black device at left is part of the GEE system, and that handle suggests how the receiver module could be switched out with a last minute change of the shore station frequencies. Alan is pointing at the vessel’s radar, which could only look forward with its fixed yagi transmit antenna. Dual fixed receive antennas were used to give some sense beyond range of where a target was in the radar’s 60 degree beam, but like the other gear it seems like an artful operator was mandatory.

The gray box at right is an IFF, as in friend or foe identification, which could send out an ID signal on the radar frequency that a similarly equipped friend could automatically reply to. Watson thinks of the technology as an early form of AIS. Medusa also had a RACON-like directional radio beacon that was activated so that the Allied fleet could home into Medusa and the mine cleared channel. 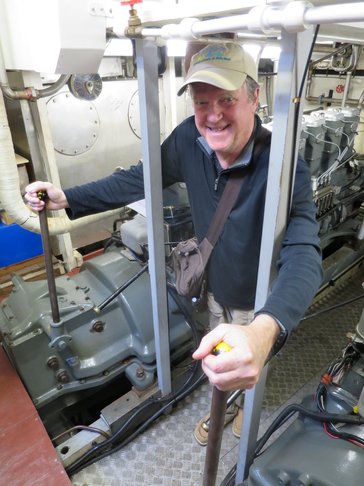 Yes, I had a wonderful time visiting this historic vessel and couldn’t help but ham it up while feeling what work it is for the engineer to shift the original twin Gardiner diesels in response to bell commands from the bridge or wheelhouse. The pride and good cheer of her volunteer stewards were also infectious. But I’m also aware of the solemn side of this occasion. 70 years ago my dad was leading an artillery company up through southern France and would lose more friends and most of his hearing before it was all done. And he got to go home to a country that hadn’t been ravaged by bombs and nearly conquered.

Apparently, the jaunty 1944 sailor seen at lower right below, now 90 years old, was back aboard Medusa yesterday, and note the Hitler imitator at upper left. I’ll be traveling home today, but when I can, I’ll follow Medusa on Marine Traffic. I imagine she’ll be the talk of the English Channel as she crosses all that traffic. 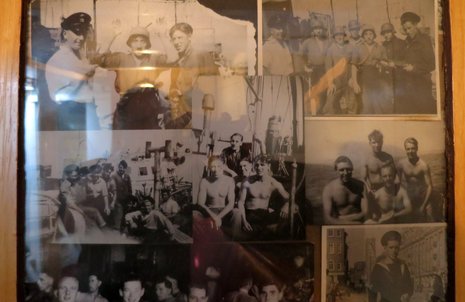