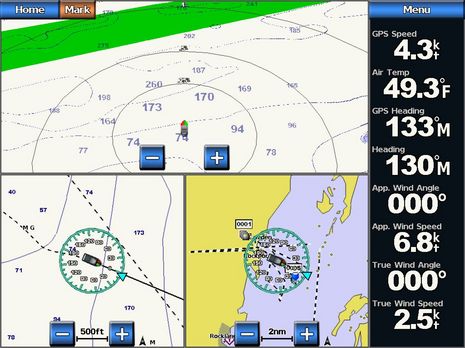 This entry’s title is not about cause and effect; my wind sensor testing may go incomplete, but that has nothing to do with Garmin’s chart problem.  And while I had a good time on the water yesterday, even if frustrated by details, the mood in Kansas seemed a bit morose.  Imagine the satisfaction of introducing all the free and amazing enhancements in Garmin’s 5.0 marine software (which I was enjoying immensely, as seen above), but then just a few weeks later realizing that there was a processing error in the creation of new and improved Bluecharts that was potentially so bad that you had to recall all the 2009 chart cards sold so far around the world. Ouch!

Fortunately, the g2 Bluechart problem does not effect any built-in charts, so no one has to send back a plotter for reprogramming.  But Garmin does want everyone who has a chart card dated March, 2009 to trade it back in for a 2008 card, with a 2009.2 replacement promised at least by late fall (they have to take a hard look at those new data processing routines).  Garmin has a FAQ here, and there’s a THT thread going here.  And let’s note that Raymarine also announced a bug problem recently, which delayed what is purportedly a major software update for some of its gear.  And credit both these companies for going out of their way to make sure I knew about these problems, so that you all would.  I think they deserve our sympathies, too; the marine electronics industry isn’t exactly booming, and glitches like these have to hurt.

Now, about my N2K wind system testing.  First of all, take a good look at that Garmin screen above.  GPS and Heading are coming from the Airmar PB200, and Apparent Wind from Garmin’s own GWS 10 (it was easy to choose any of the five sources on this 5212 or on the GMI10).  Note how well the data lines up, even in quite light air.  The situation seen below is even tougher; I’m running at 5 knots with 3-4 knots of True Wind on the starboard quarter.  I think the level of sensor agreement is pretty remarkable, but there are issues with even a visual comparison. The ST70 wasn’t really useful as I couldn’t tell which sensor it was using and, besides, I don’t think it will calculate True Wind relative to boat with SOG instead of STW.  (Raymarine’s software update may deal with these issues, and Gizmo will soon have an N2K paddle wheel transducer.)  And I couldn’t get the DSM250 to show True Wind from Maretron’s own WSO100 because to choose sources you apparently have to turn off devices, even if they also offer GPS and Heading (but there may be techniques I don’t yet understand as Maretron’s display and N2KAnalyzer software is getting rapidly more sophisticated).  Plus there’s the fact that each display’s default dampening is different.
Besides, as several commenters have suggested, the best way to closely compare sensors is to record all their raw outputs while they experience the same wind and boat motion, and then look for outliers (if you don’t have a wind tunnel for “ground truth”).  Having all the data on one N2K bus is part way there, but I don’t yet have the means to collect and analyze that data, and I’m not sure when I will (Intelligent Gateways would help, if they ever materialize).  But would I find any meaningful differences?  My impression so far is that these sensors all work fairly well — and share data across an N2K network very well — and so the significant differences for users tend to be about installation (cables, bases, terminals, etc.) and the sort of instrument or MFD you’ll need to calibrate/manage the sensor.  Other issues of interest include the effects of water on the ultrasonic sensors and how well a multi modal sensor like the PB200 can compensate for mast motion.  I’ll attempt to cover all these bases in an article I’m writing for the September issue of Cruising World.  But as for comparing wind sensor precision, I’m kicking that can of worms down the road. 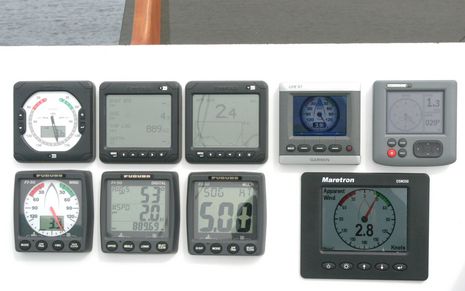