We had a false start in December when we first saw the PC charting program Expedition interfaced to a Navico BR24 radar, but as of last night this interesting possibility, and many like it, seem to be official.  Read the full press release here.  I think this means that Expedition and some other charting programs may soon be able to run a Broadband Radar, with or without a Simrad (or Lowrance?) multifunction display involved, but there are a few details of the plan and implementation that I’d like to know more about…

The BR24PC will not be an open source SDK (software development kit), for instance, but instead only licensed to “approved third parties”.  This is understandable, I think, but I do wonder which parties Navico might not approve of?  Like MaxSea and Nobeltec, nearly half owned by Furuno?  (Would they be interested anyway?)  I also wonder what the line about how the “BR24PC SDK is available with two levels of
functionality and requires unique unlock codes…” means.  Will free range Broadband radars cost significantly more than they do when bought as part of Simrad system (about $1,600-$1,900 street)?  If there is a premium, will it still apply if you also have a Simrad NSE in the system (a nice combination on two-helm-boats like Gizmo methinks)?  {Please see comments for update on pricing.}
There are also two hardware interface issues, surmountable no doubt, but to be noted.  You can see below that the BR24 cable ends in a standard, though waterproofed, Ethernet connector at the R11 (or R10) interface box.  But the Ethernet output on that box uses Navico’s own connector.  You can simply skip the interface box altogether, but not if you want MARPA.  The BR24 needs to have fast heading data injected into that Comms port (even when the same data is present in an NSE connected to the box via Ethernet!) to do the MARPA processing, which is unusual and not well documented in the manual.  Maybe Simrad will produce a patch cable with their Ethernet plug on one end and a standard RJ-45 on the other, and, besides, our man Kees has already figured out how to make one yourself.
But these are probably all just little quibbles. Overall this is an exciting development in marine electronics, I think — and hopefully not the last Ethernet marine sensor to go free range — and I know a lot of you agree.  Let’s discuss. 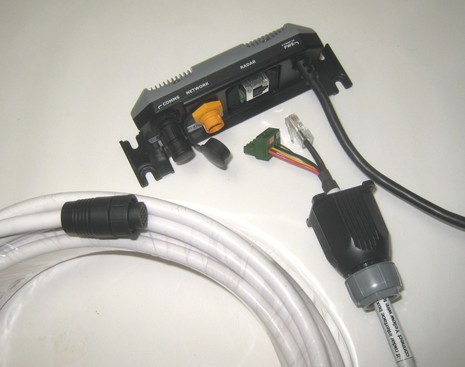