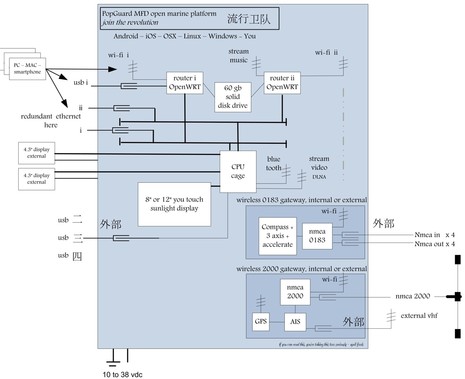 The PopGuard MFD from ShenShau electronics — a Panbo exclusive, and not yet online — may be just the thing for those who desire an Ethernet
centric MFD, a seriously open architecture, and/or the ability to run
applications of your choice from any one of five different operating
systems including Android and iOS. It may also be just what your
looking for to extend your favorite iPhone or iPad application to a
sunlight viewable display, manage streaming audio to your cockpit
speakers, or play movies cached into 60GB of high speed solid
state storage…

This product started out as an expansion of a control system for a three person university research submarine. Students were creating applications for collecting telemetry and running experiments on laptop computers and 1st generation Apple iTouch music players, rather than using pencil and paper. The experiments ranged from those repeated each semester for marine biology classes, some specialized experiments that are part of serious research, and an iPhone based autopilot that will dock the sub with a submerged lab.

Concerned about safety issues from loose equipment and wires around a crowded submarine of novice sailors, the designers came up with a way for students to secure their laptops and iThings against a rear bulkhead, plug sensors into an Ethernet network, and have the two talk to each other thru wi-fi, allowing the applications running in computers against the bulkhead to be controlled from touchscreen displays reliably mounted on the sub wall. The whole design allows an experiment to be setup and torn down in a couple of hours, and has grown to support five different operating systems (Windows XP, Linux, Google Android, Apple OSX, and Apple iOS). In addition applications can be loaded into the MFD and either way, there is the ability of the MFD to access the storage on any of the connected devices to stream music and video.

A commercial version of this product has been under development for almost a year with the goal of competing with all the consumer oriented MFD’s on the market today, to be sold under the PopGuard brand (named after the submarine) and financed by an 80 million dollar government grant to commercialize university developed technologies.

The commercial product takes all the components and places them in a single enclosure most unlike any MFD I have ever seen. As shown in the diagram above the MFD comes in an enclosure that sports internal and external touch screen displays. Packed inside the enclosure are a number of components including two modified Linksys WRT54 routers, a metal cage containing the CPU’s, a 60GB solid state disk drive, a solid state compass that can be optionally detached and externally mounted, many antennas, and a dual channel AIS transceiver. The two routers offer one Ethernet port each as a redundant connection to the outside world and contain open source OpenWRT firmware and Linux that allows packages of custom software to be installed if you have the skills. 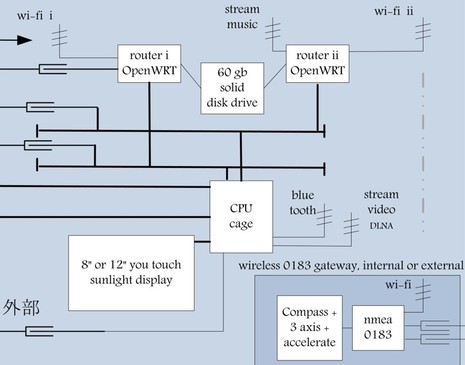 Each of the touch screen displays are sunlight viewable with soft keys embedded in the bezel that are configured to function based on which operating system is underlying the application in use. For example, run an Android application, and the four soft keys function identically to those on a Motorola Droid. Each display also features tiny notches for a water resistant microphone and speaker.

Just like on the submarine, the MFD can work with software already installed in devices you already own, without having to actually install the software in the MFD. Also like the submarine version, the wireless connectivity means you don’t need to actually place your devices in the MFD. I had a chance to play with this arrangement for a while in a lab, and even pair it up with my Motorola Droid 2 on which I have a couple of sailing applications that proved entirely useless last season because the Droid 2 display is virtually unreadable in direct sunlight. After loading the provided PopGuard application onto the Motorola Droid, the PopGuard MFD remotely ran the applications on my Droid 2 while it sat in my belt holder.

Impressive, yes, but is this really an MFD or just an interesting collection of components jammed into a case? Part of the commercialization effort is in the area of creating a collection of sunlight viewable displays, NMEA gateways and Ethernet transducers, but there is also funding for the administration of an open source project to improve the software beyond what the creators had imagined. At the moment, I think they have imagined quite a bit. It would be a fair criticism that the lab system I observed is overloaded with capabilities. For example, something seems a bit unnatural when you are in a submenu where you can choose Navigation, Facebook, Radar, DLNA, or Netflix. I need to ask them if I can simply install Coastal Explorer, and then supplement that with all the neat applications on my Droid 2 that will benefit from the sunlight readable displays.

The price for all this open architecture greatness is very transparent. All the software is available free in an open source project where you can also find a list of instructions to purchase the components separately to build the MFD yourself. There are complete pre-made wiring harnesses available so you don’t need to strip a single wire or crimp connectors. I can see how this can all be assembled in about 1 hour on my work bench, and rather than use their enclosure, for another 50 hours I could probably custom mount this directly in the helm of my boat.

If you’re not inclined to assemble one yourself, the finished product will be available for sale by the end of June. Also available, will be a line of Ethernet transducers that will allow you to entirely standardize on a single network technology for your entire boat that is the same familiar wiring you have connecting your computer and printers in your home, or wireless if you desire.

If you desire to stay with NMEA-2000, NMEA-0183, and all the transducers you already own and love you can do that also.

So let me ask, is this open architecture getting you excited or nervous? Did you examine the diagram at the top of this entry (click to zoom)? Go ahead, I’ll wait.

How would this affect your future as either a boat owner or industry insider?

Before you ponder this too much, let me point out that this entry was crafted with the intention of bringing some humor to the first of April. I hope a loud laugh is forthcoming as you process this. 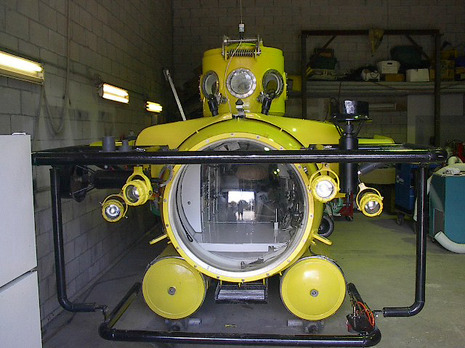 I’d suggest a big Panbo hand for Dan’s efforts, but maybe we should keep the jest quiet in the comments section for while 😉 — BenE