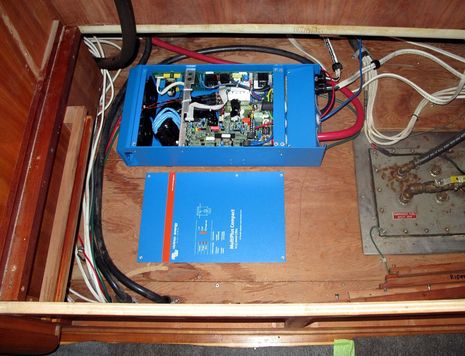 This is not the scene most boaters want to see in the middle of their salon going into Memorial Day Weekend, but at least I can look forward to checking out how well that Victron MultiPlus 12/2000/80 charges and inverts. It may seem crazy to replace the perfectly functional Xantrex Freedom 25 that used to occupy this spot, but it’s part of an aggressive “re-power” plan that’s had me busy recently. Besides the Xantrex has already replaced the broken one on my in-law’s M/V Brilliant — which partially subsidized this upgrade — and I’m nearly as happy pulling cables as I would be lounging on the fine settee that will eventually go back here…

The goal — partially to suit my personal cruising style and partially to fufill Gizmo’s test boat role — is to get her DC and AC power systems as efficient and up-to-date as possible. I suspect that there are numerous good choices for charger/inverters but Victron Energy had a leg up because my “power guy” Alden Cole — who now works at Wayfarer Marine and is supervising my installs — has had positive experiences with their gear and because the U.S. distributor happens to be just down the road in Thomaston.
But at least equally important to my buy decision is the fact that Victron is getting fully aboard the NMEA 2000 bus. The company has developed many products serving many markets and hence has numerous data protocols, but here’s what you’ll find in their latest data communications paper: “Canbus is the preferred protocol for third parties to communicate with our products. Our CANbus protocol is based on the NMEA2000 and J1939 protocols. We are using proprietary PGN’s for all information that does not have a standard PGN available.”
Victron already has a certified NMEA 2000 interface for its well-regarded BMV battery monitor and has one in the works that will interface with the Ethernet-like VE.Bus that’s on my new inverter/charger (and which must remain proprietary as it can be responsible for tricky stuff like synchronizing AC streams). In fact, Victron’s Matthijs Vader told me that once NMEA finally finishes the power control PGN set — please! — third party displays will not only be able to monitor what’s happening in the Victron power products but also control them. Apparently Victron is also working on a new generation of solar panel controllers and I’m hoping that they too might have a VE.Bus and N2K relationship.
But before experimenting with some of this power monitoring and control gear — Maretron, C-Zone and maybe others will be included — I felt the need to further untangle the systems Gizmo came with. A big step in that direction was removing the Onan 6.5 kW genset that my “engine guy” Pat Ricci lifted off the back of my truck yesterday… 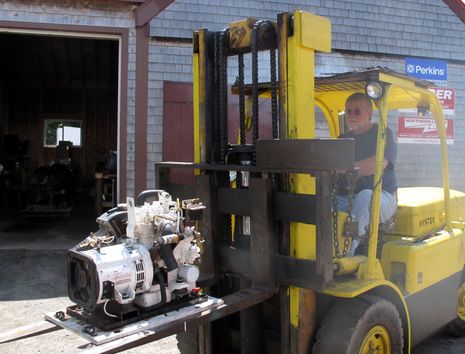 Pat’s going to refurbish the Onan before it hopefully finds a better home — see Panbo Classifieds soon — while I try to get along with my improved main engine alternator setup and the solar panel setup that’s still in works, plus the reduced loads generated by strategies like LED bulb and fixture replacements. I don’t think I’ll ever be able to call a 450hp boat “green” but she is getting greener. Not to mention quieter, and lighter, and easier to understand and troubleshoot.
So yours truly has spent a lot of time recently in dark, dirty places happily disconnecting and stripping that generator and removing significant quantities of wire. That pile of cut cable ties below also represents the earlier extraction of other unwanted gear — like one of the two air conditioners and the associated second 30 amp AC inlet — but I think I humped about 75 pounds of no-longer-needed battery and AC cables up the ramp yesterday. I wish I had similar energy to put toward slimming my own self down!
This is also why I’ve been a bit of slacker with Panbo entries recently. But I am enjoying a newly installed Fusion IP700 while I work and I’ve been testing a B&G Triton instrument and autopilot control that will go in the boat soon, along with a few other new goodies. Patience please, and I will report on the Victron start up testing over the weekend, which I hope you enjoy even if you have to go boating 😉 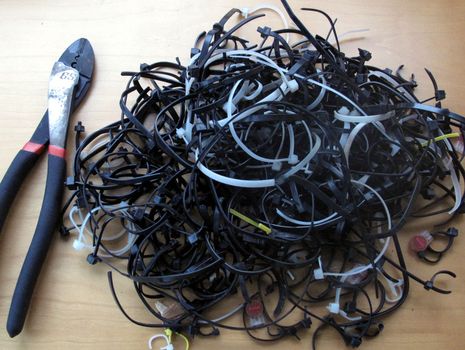 PS 5/28: Happy to report that the install has gone well, the Multi is working well, and the settee is back in place and quite loungable. Below is screenshot showing how I’ve installed Victron’s VE Configure II software on Gizmo’s Datalus computer (with the help of the MK2 USB converter borrowed from Alden). I’ve already used it to set up the low inverter standby power “search mode” and maybe with some help can refine the battery charging profile seen on this page (though my sense is that it doesn’t need much refining). 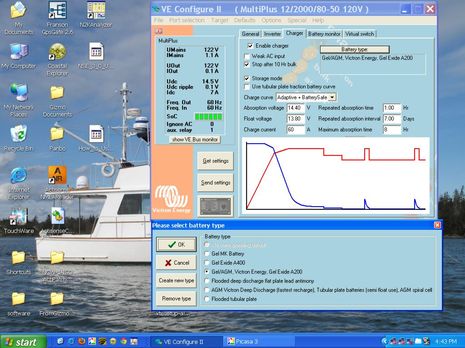