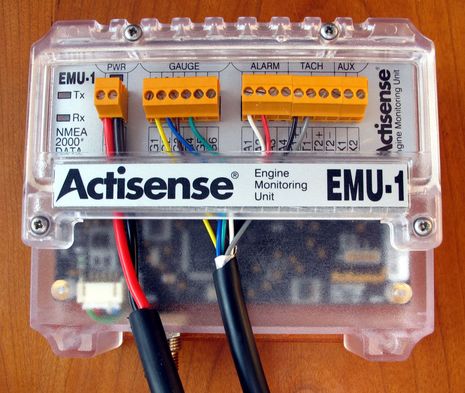 It’s great to test an unusual device that promises to do something new and desirable for the good vessel Gizmo and find out that it installs fairly easily and works quite well. That Actisense EMU-1 is now converting the analog gauge data from the boat’s 14-year-old Volvo Penta diesel into NMEA 2000 messages that can be displayed in multiple ways on most any MFD or instrument screen on board and can also be custom alarmed and logged. I’m going to be better informed about my engine’s health, which is very important, while also gaining some scarce helm panel real estate for better uses than dumb analog gauges… 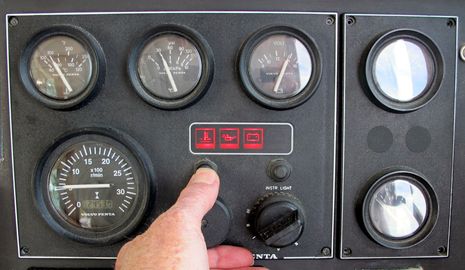 I’m too conservative to totally remove Gizmo’s old gauges (like the set above at the lower helm), but I’m already confident enough of the EMU-1 data that I plan to move them to an obscure location when I do a “glass bridge” makeover this winter. Incidentally, one neat nuance of the EMU-1 is that each of its 6 gauge channels can automatically sense the presence of an analog sibling, adjusting its calibration curve to suit and also sending power to the sender if needed. If the old coolant temperature gauge (upper left) fails, for instance, the EMU will still deliver the temp information if the sender is working, at least theoretically…and if the EMU or N2K network fail, the gauge will still work. This is a semi-redundancy I like!  (The three trouble lights and their associated audio alarms are a different deal, which I’ll explain further down.) 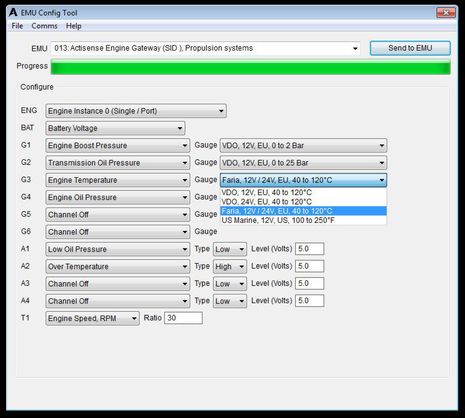 The most tedious part of the install was attaching all those skinny alarm, gauge, and tach signal wires seen on the EMU-1 terminals (top photo) to the appropriate wires on the back of the old gauge panel. Removing the panel made the job easier, and I also used 3M Scotchlok IDC tap connectors that will eventually get their own Panbo entry. Then came the exciting moment when I fired up both the Volvo Penta (whose ignition now also activates the EMU-1) and the EMU Config Tool software above. (It’s necessary to have an Actisense NGT-1 Gateway between the boat’s N2K network and whatever PC you use, but there are numerous other good uses for the gateway, like feeding boat info to a compatible charting or instrument program.)

The Tool is pretty straightforward; drop-down menus let you specify which signal is attached to which terminal and then select possible gauge calibration profiles. There’s not much custom calibration possible until Actisense adds it (planned) but in most cases the digital signals seem to match my analog gauge readings pretty well. The exception is coolant temperature, which is reading about 15° high (I have a Maretron temp sensor on the block, which confirms the analog gauge). I look forward to getting the temp numbers right as the Config Tool evolves, but in truth, the number I’m getting is quite usable because it’s consistent. I also had to fiddle with RPM ratio until it matched (what I’ve always considered) tachometer reality, and that was it… 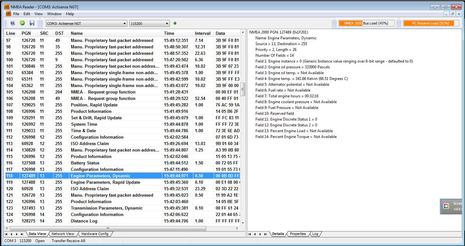 On Gizmo there are umteen ways to display N2K info, but for the real nitty-gritty there’s nothing like Actisense’s NMEA Reader (or Maretron’s N2KAnalyzer). All the PGN’s (messages) from SRC (source) 13 on the screen above are coming from the EMU-1 and the right-hand window is a breakdown of the “Engine Parameters, Dynamic” PGN 127489. Engine RPM, Boost Pressure, and Tilt/Trim are in the “Engine, Rapid Update” PGN going out every 0.1 seconds and naturally Gizmo’s Transmission Oil Pressure is in the “Transmission, Dynamic” message. This is a great way to see what a device like the EMU-1 is doing, and what else it could do (if I had the appropriate sensors). 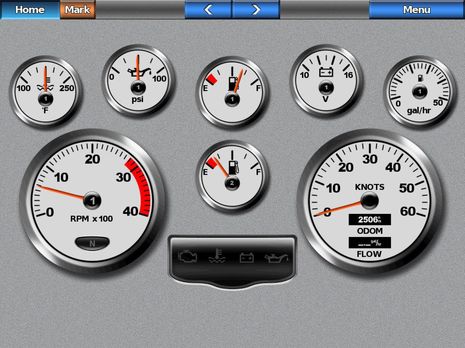 Now here’s how fancy some of that same data can be displayed, in this case on a Garmin GPSMap 7212, which even asked me if I’d like to set the engine’s maximum RPM when it first saw the EMU-1 tachometer message. Newer Garmin displays like the GPSMap 741 and the GMI 20 Instrument (Panbo look here) will automatically select gauge types based on the PGNs received, though none would put up a Transmission Oil Pressure dial (even though the numeric data can be shown no problem). Garmin also lets you set limits on each digital gauge and is probably the best at deciphering and showing the “trouble lights,” which are associated with those alarm switch terminals on the EMU-1. (If Gizmo’s ignition is on without the engine running, the low oil pressure warning above “lights” up, and I was able to confirm the over temperature alarm by temporarily setting it to “low” with the Config Tool.) 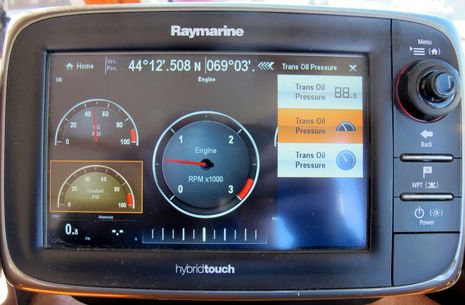 But while you can’t change which gauges are shown on Garmin engine windows, you do all sorts of modifications to the Raymarine e7 screen seen above. Except that the only gauge for which you can customize the limits is RPM. Sometimes this is not important, but when, say, the fixed engine voltage dial goes from 0 to 60v, that’s not very useful for monitoring a 12v alternator. The good news is that every N2K display developer is doing a better job with engine info than they used to and that trend may even speed up as devices like the EMU-1 (and Ray’s new ECI-100) proliferate. 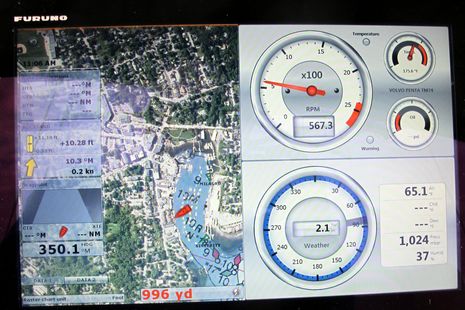 I haven’t yet fooled with the gauge capabilities of the Furuno NavNet TZT14, but I do like how it can display the engine’s “nickname” and also the look of the customized tachometer. And while I’m not sure why the TZT wasn’t showing oil pressure at the time of the screenshot, it does show fine on the Furuno RD33 screen (Panbo hands-on here). Neither will show Transmission Oil Pressure, but again, that’s probably something Furuno will add in good time (or I missed somehow). 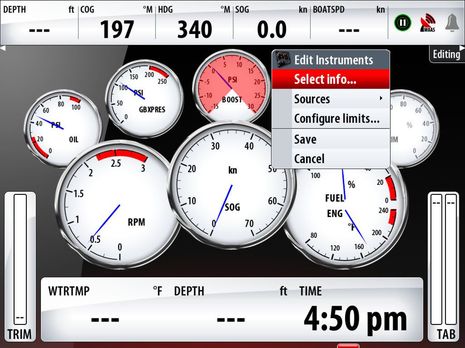 While the Simrad NSS and NSE engine screen dials may be fixed, you can put any N2K data field available into a gauge and configure both its low and high limits and warnings. Nice! (After the screenshot I was able to program the left and right bar graphs to show Gizmo’s port and starboard fuel tank levels, and also to find valid data for those blank fields.)

I don’t think that any company offers as much gauge customization as Maretron, but frankly all this experimentation left me wondering how much screen real estate users will want to give up in order to duplicate old style analog dials? Personally, I’d always like to have a good tach in view, but I wonder what happened to space-efficient gauge ideas like what the Simrad CX sported in 2006? I’ve also come to realize that well-defined alarms that really get my attention are way better than numbers or needles that I’m supposed to monitor. Maretron is ahead in this department, too, and I’ll explain the niceties of the righthand screen above in a future entry. But I believe that sophisticated and flexible alarming will come to many N2K devices eventually. In fact, I think it’s quite possible that Actisense will eventually add custom N2K warnings and alerts right into the EMU-1 box. There’s so much possible when a PC programmable box can put simple analog data into meaningful NMEA 2000 messages.

That’s not to say that the Actisense EMU-1 couldn’t be very useful on many boats right now. Gizmo has had two major engine coolant failures during my four years of ownership, and either one could have cost me a great deal of money had the engine overtemp alarm not warned me at the last moment or if I’d been in a less friendly spot to shut down and cool off. With the EMU-1 and a custom N2K alert system (like Maretron’s) I can get an early warning of engine temperature just above normal. Ditto for engine and transmission oil pressures, which I can also now monitor on the flying bridge (instead of this). And note that I think the EMU-1 can even support added sensors, like perhaps a redundant temp probe on block, and will be able to do even more once the two auxilary inputs are enabled.
As for competition, I haven’t heard anything recently about the Albatross Control Systems adapters I tried in 2009 and apparently Rose Point Navigation has decided not to release the analog engine adapter for which I saw neat calibration and gauging back in 2011. On the other hand, the NoLand RS11 CANbus Engine Data Converter that Panbot Adam Block once wrote about is now NMEA 2000 certified and sounding pretty powerful. It has, for instance, a way to reset the engine hour field it sends out after install, a feature I hope Actisense will add.
I suspect that the $455 EMU-1 is easier to install than the $280 RS11 (and it has more inputs), but then again, I probably spent nearly a day getting the one on Gizmo working right. In fact, this type of device seems like a good opportunity for professional installers who could probably get the job done quickly and well, once they understood all the steps (Gemeco, which also stocks all this gear, can help). There are a lot of analog marine engines out there that could use better attention in their waning years, and a lot are on boats that already have displays that could at least do some of the monitoring job now and will likely get better at it in the future. 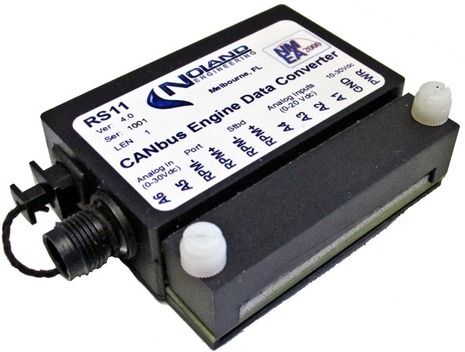