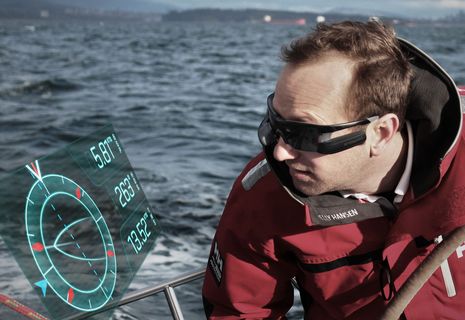 The goal is to direct your focus wherever it’s needed on or beyond the boat while still having critical data in sight.  Brand spanking new today is the Afterguard heads-up display (HUD) for racing sailors. Yes, recent America’s Cup skippers apparently used HUD sunglasses, though you’re a better researcher than I if you can find detail about how they worked and what data they provided. Afterguard intends to bring this technology down at least a few levels, and that means we get a better look at what it can do. This sort of product is more than a little out of my wheelhouse, so to speak, but it looks like this new company did its homework and made some smart decisions… 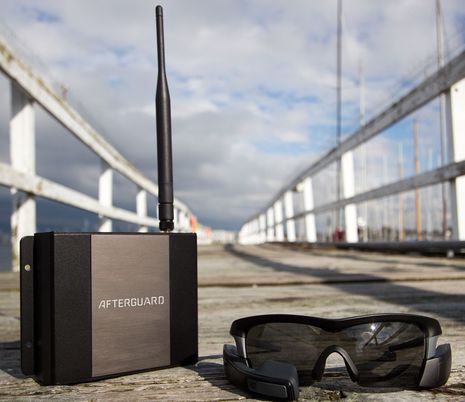 The heart of the Afterguard system is a Central Communications Unit (CCU) that can accept data in three protocols — NMEA 0183, NMEA 2000 and Seatalk — and has purportedly been tested with the output of many instrument systems (compatibility list here). Even AIS data can be processed in the CCU, though the initial software package will not have AIS overlay. The tech specs don’t say what sort of processor or operating system are in the CCU but the crunched data is broadcast over WiFi (external antenna supported) to one or more customized pairs of Recon Jet HUD sunglasses (which run Android). 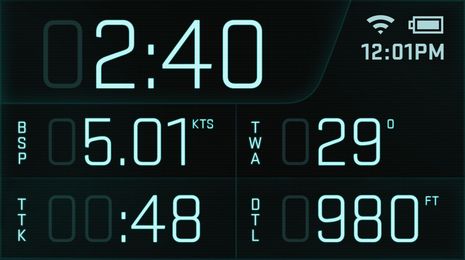 The initial Afterguard system will offer three screens that the wearer can change by swiping an optical sensor on the glasses. That’s the “Start Sequence” above, which is something like the B&G H5000 start screen I saw in January. That one wasn’t showing the valuable TTK (Time To Kill) calculation but did have more info on the line distances and bias.
The Afterguard screen shown in the top photo — called “Virtual Tactician” — is designed to help with mark roundings and boat crossings, and it has an intriquing description: “By tracking the user’s gaze and combining it with the system’s data the user will be able to make split second tactical decisions without relying on a hand bearing compass, lines marked on the deck or other basic means. Simply put, the user will be able to look at another boat and gauge whether they are ahead and whether there is room to cross.” 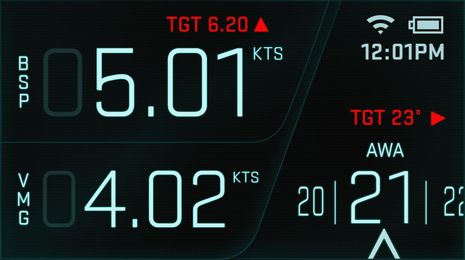 Finally, there’s the “Performance Dashboard” screen, which obviously includes targets based on a boat’s polar data, and apparently the Afterguard system can receive the polars and do the computations itself. You can see this screen and others in action on this exciting video and/or the one on the Afterguard site.

My guess is that some racers will be excited about Afterguard “competitive edge” promise but possibly dissappointed that it won’t ship until next fall and that the buy-now price is $1899. I wonder if other companies or even enterprising teams will try to do something similar with the off-the-shelf version of Recon Jet HUD sports glasses, which are due out soon at $599 a pair. As you can see in the diagram below, the standard glasses come with quite an array of sensors and wireless communications options, plus a camera, mic, and speaker. Recon recently got backing from Intel and several tech writers are pretty excited about the Jet design, as in this Wired article and this Engadget video.
And how about a sportfisherman being able to check out his fishfinder with just a slight glance down? But no doubt many readers will think that using a HUD is silly on a boat, or anywhere, and I might have agreed…before I adopted the hearing aid, bluetooth watch, and smartphone network I use every day.