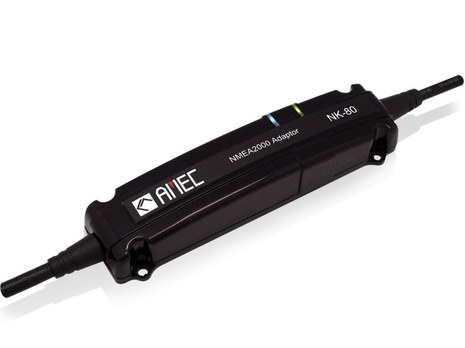 It looks like Actisense has some serious competition when it comes to translating data back forth from NMEA 0183 to NMEA 2000. And while that’s not a sexy marine electronics topic, it’s an important one as many boats use a changing mix of the two protocols. The AMEC NK-80 adaptor above was recently NMEA 2000 certified and it seems quite able. If you go to the NK-80 page of Milltech Marine — which helped develop the product and distributes it in the U.S. — you can download the manual and thus check out the nitty-gritty of specific data fields translated. What I notice is that the NK-80 seems to cover every AIS PGN and lots more, which seems to be a problem for the otherwise able Actisense NGW-1 series of adaptors…

Actisense offers an NGT-1 that translates lots of 0183 messages but not AIS or one that does AIS but only a more limited set of other messages. I’m guessing that this is due to processor limitations as AIS at 38,400 bps can be quite a data load, but it seems like AMEC’s newer design has more horsepower. {I guessed wrong; see my long comment below, which includes Actisense’s explanation of why the NGT-1 comes in different models.}  Between the NK-80 manual and Actisense’s downloadable conversion lists you can see the differences and hopefully know which product will serve your needs. Actisense is a great company in my experience but isn’t competition in niches like this a good thing?
Learning about the NK-80 was also a chance to chat with Milltech’s Doug Miller, who tells me that “the more I play with this unit, the more scenarios that pop up. Initially we were looking at this as a way to get NMEA 0183 data from an AIS transponder or receiver to a NMEA 2000 network. But of course any 0183 device can work. Then since it is bi-directional, it works as well as a way to get NMEA 2000 network data to another NMEA 0183 device or to a serial device such as a PC. Coupling this device with our NMEA RS422 USB Breakout Cable gives the user an easy way to get NMEA 2000 data to a PC nav program. Or by coupling it with our new Comar NMEA-2-WIFI NMEA to WIFI Converter you can take NMEA2000 data and pump it out via WiFi to another device such as an iPad running iNavX…”
Doug also told me that his company is in it’s 7th year as an AIS specialty shop — time flies! — and that last year the balance tipped from receivers to transponders. “We’re seeing AIS moving more into a mainstream ‘must have’ solution as opposed to the early adopter ‘nice to have’ category where it was for several years,” he wrote, which is certainly what I’m seeing on Penobscot Bay this summer. Plus there’s a “real uptick in iPad interest” — no surprise here — and hence lots of interest in that Comar NMEA-2-WiFi box. He reports that the Standard Horizon Matrix AIS+ receiver (which is also a very good VHF radio. I think) is still a popular product but what he calls a “killer” is the AMEC Camino-101 Class B transponder, which only costs $449 and can be accessorized with a rugged looking “silent mode” and SRM control. Still, though, if you want AIS over NMEA 2000, the Em-Trak B100 (recently tested on Panbo) looks like a better deal than the combo of AMEC’s Camino plus NK-80. But isn’t competition in value-oriented Class B AIS a good thing too?