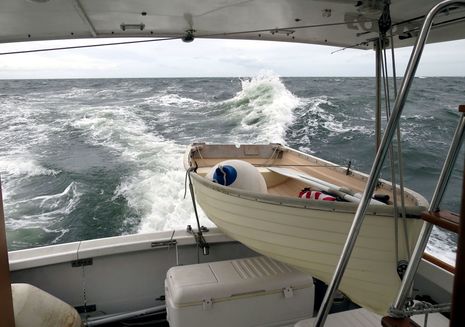 Gizmo is fenders down, awning up, in bustling Baltimore Harbor, and I have tales to tell. This old powerboat sails! That’s no surprise given her windage, but now I have precise data about how much wind (and current) can help her along, thanks to a fuel management system. In this photo, for instance, we were making around 10 knots over the ground at 1,350 RPM but still getting over three miles to a gallon, thanks to a stiff easterly wind pushing us down Long Island Sound. That’s a wake-pulling, inefficient RPM when running on flat summer water in Maine, but is much easier on crew and autopilot when in seas like these. While I’m usually willing to spend more fuel money to shoulder through conditions like this, I was pleased to learn that the dollar difference wasn’t great… 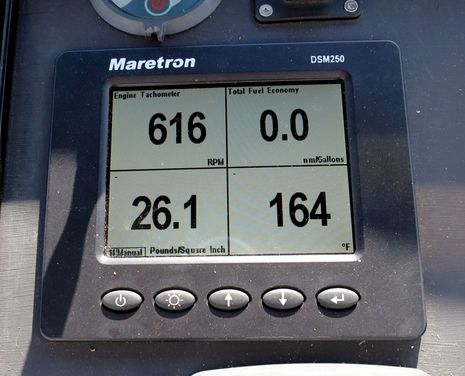 I failed to get a photo of this underway (and may never learn to dust before snapping), but this was our default flybridge engine screen. In the scene I described, the Fuel Economy value — nautical miles per hour divided by realtime gallons of diesel per hour burned by engine(s) — was wavering around 3.1 nm/gal. As explained when I installed the Maretron fuel flow system, measuring instantaneous flow accurately is very hard, especially when a diesel is being run at a relatively small percentage of its maximum power. I’ve learned from the flow meters that my 450 hp Volvo Penta was sucking in about 36 gallons of fuel per hour during that 1350 RPM run, but sending about 33 gallons back to the tank. Set your sink faucet to fill a gallon jug in 20 minutes and you’ll see what a small flow the Maretron gear was trying to measure in realtime, then consider the accuracy difficulty when that flow is actually the differential of two flows ten times greater.

So I’ve gotten used to seeing jiggelty fuel economy numbers, but find them valuable nonetheless. The fuel burn at different RPMs in still conditions is generally consistent, and all summer I noticed how I could see the effect of fair or foul winds and currents. Besides, the difficulty of measuring instantaneous flow doesn’t mean these meters aren’t extremely accurate over longer periods… 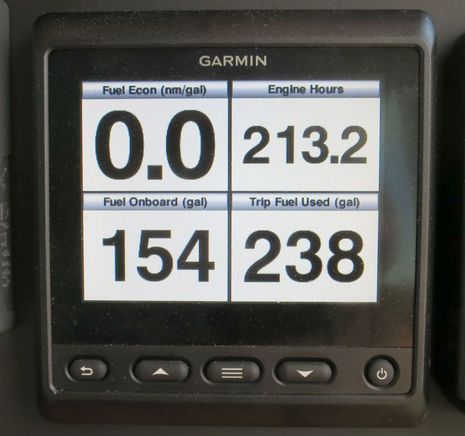 I have reasons to believe that Gizmo did indeed use 238 gallons of fuel steaming from Rockland to Baltimore. For one thing, this Garmin GMI20 totals fuel flow independently, but is within a (rounding error) gallon of the count kept by the Maretron system itself. Moreover, the Garmin calculates Fuel Onboard by subtracting flow from the total you told it was onboard when the trip started plus what you record as added later. So a full 280 gallon load (at a nice price, thanks to Journey’s End Marina’s fuel key program) plus 115 gallons added at fabulously funky Miss Chris Marina in Cape May equals 395 gallons, less 238 used equals (rounding error) 157 remaining.

Ah, but you skeptics out there are wisely thinking, “Wait, the counting may be independent but isn’t it all based on a single source of fuel flow data?” Which is why I was pleased to learn that Maretron does not calculate remaining fuel using flow, but instead does it based on tank capacity and level. Right now it reads 159 gallons remaining, which is darn close for an entirely different way to measure fuel volume. Skeptics must conclude that either the Maretron flow system and the tank calibration I did using a CZone Signal Interface (using existing Wema senders) are both quite accurate…or they err in a currently copacetic way. 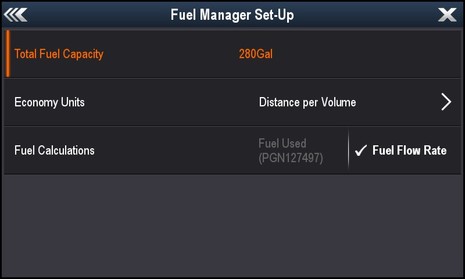 There are many aspects to fuel management and potentially many sensors and confusions involved. This screen shows how Raymarine let’s you choose to display gallons used and remaining by either counting the flow rate like Garmin does — the Ray a77 warns that it must always be on when the engine is running — or by referencing NMEA 2000 PGN 127497. That set of data fields is called “Trip Parameters, Engine” and the Maretron FFM100 module is always transmitting a current “Trip Fuel Used” count. 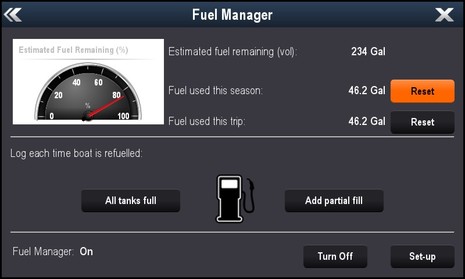 I don’t know why, but you can only start the Ray fuel manager when you’ve done a fill up (and already set up the tank capacity). I did all that in Rockland, but somehow the manager got reset somewhere along the road; it may have been operator error, but I won’t be able to get it right again until I do a full fill. However, my extensive paper records indicate that Raymarine can count fuel flow well and, like other displays, their MFDs can also calculate range and/or running hours at a given RPM. My records are revealing some oddities, too, like the way the Actisense EMU-1 (discussed here) adds engine hours when it’s on but the engine isn’t running.

There will definitely be another entry on fuel management as I learn more about it and try other data displays. But I should mention the unfortunate fact that at least one of my Maretron flow sensors is weeping about a gallon of fuel per month into Gizmo’s engine pan. I don’t know if it’s because I didn’t screw an NPT fitting tight enough into a meter’s resin body, or so tight that it caused a crack. Maretron says that either is possible and admits that the tolerance either way is slim, but also says they’ve never seen a catastrophic failure (sensor blows apart, bad things ensue). Plus, most of their current sensors — click on “Accessories” tab, and note that they’ve added models for really large flows — now have aluminum bodies.

I look forward to switching flow sensors so I don’t have to mess with spilt fuel, and I also look forward to displays that make even better use of flow information. For instance, none that I know of can collect an average nm/gal figure for a trip. And I haven’t yet seen the “money meter” I’ve joked about (and that Maretron is purportedly working on). A display system just needs to be able to accept the per gallon price when you input a fill and it could then give you realtime and trip time cost per mile…if you want to know.

I can crunch a spreadsheet, though, and have enough data to tell you that Gizmo averaged 3.1 nm/gal over the 740 mile trip at a fuel cost of $0.87 per mile. Most of those miles were at more than penny-pinching RPMs, but very few at mile-per-gallon 17 knots. Plus, we got more than our share of tail winds and also tried hard to time the currents, even leaving Atlantic Highlands at 4 am. Sailors can justifiably scoff at my fuel “efficiency,” but then again we enjoyed briefly catching up with a couple of big 20k+ power yachts, because they apparently had to refuel in Atlantic City (or gamble a bit). Yet then again, those guys might enjoy seeing a big number on their “money meter”; we’re not all the same and I’m OK with that. 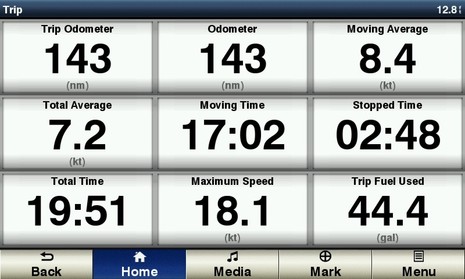