Blue Guard Innovations calls their BG-Link an internet of things (IoT) gateway and further describes it as a unique boat monitoring system.  After my impressive test of their BG-One oil detecting bilge pump switch, I am intrigued to see what makes the BG-Link unique.  With one installed on Have Another Day  I’m getting more clarity about what their IoT first approach is all about.  The BG-Link shows a lot of promise and does some things extremely well but also has some areas in need of further development. Announced in March, the Blueguard BG-Link is available as a $700 list price WiFi only bundle, $900 cellular bundle, and $935 global cellular bundle.  The bundles include the gateway and one wireless sensor; each additional sensor has a list price of $150.  The WiFi version of the BG-Link has no monthly or ongoing monitoring costs at all — and the cellular versions can also be used in WiFi mode with no monitoring expense — but this comes with a tradeoff I’ll explain a little more below.  The sensors communicate wirelessly with the gateway via 900mhz wireless that so far has proven very reliable and quick to update. 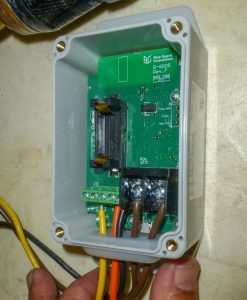 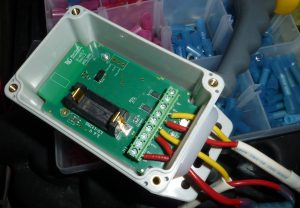 There are currently three sensors, They are:

The sensors draw power from the devices they’re monitoring and also have battery holders for an LS-14250 non-rechargeable lithium backup-battery, though the backup batteries aren’t included with the sensors.  What Blue Guard calls sensors are really more of sensor interfaces working with existing pumps, shunts, sensors, etc. I’m a big fan of the fact that for each area monitored Blue Guard is collecting all data available.  For bilge pumps they’re not just monitoring to see if the pump is activated; they’re also measuring the voltage going to the pump and the amperage the pump is consuming.  For battery banks they’re not just monitoring voltage, they also have the ability to collect amperage info from a shunt.  I hope this continues as Blue Guard adds monitors and I’m hoping Blue Guard will make alerting on all this data more powerful.  For instance, if a bilge pump is consuming 7 amps, it’s probably working fine, if it’s consuming 20 amps it’s probably a sign there’s something stuck in it. Alerting on high and low amperage when the pump is running can be very helpful to ensure everything is working properly. The BG-Link gateway with the cover removed

The gateway is a small development board from Seeed Studios with a custom hat (geek talk for the board that sits on top of the development board) made by Blue Guard.  It appears the LTE module is an addon that fits into the hat and potentially might be able to be added later. So, when you connect to the web interface from your computer, the web pages you see are being served from the computer contained inside the gateway.  Blue Guard supplies a hostname for each BG-Link gateway that allows you to connect to your BG-Link while you’re off the boat, as long as the boat has a working internet connection.  This hostname handles dynamic DNS functionality (dynamic DNS maps a name to your changing IP address) and appears to be tunneling the traffic through their server so you don’t have to try and deal with configuring port-forwarding on your router. 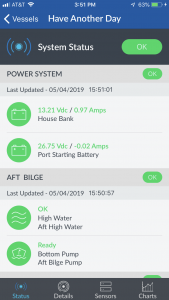 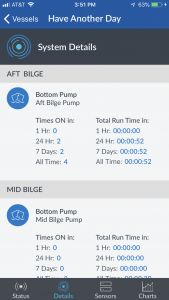 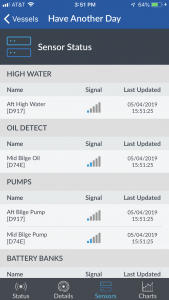 The same hostname I mentioned above is used by the BG-Link mobile app to allow you to connect directly from your phone to your BG-Link gateway.  The app does a really nice job of displaying the status of the system but doesn’t allow for configuration changes yet.

Because the data is all contained on the computer on the boat Blue Guard can collect as much data as they want, store it on the gateway and only has to access it when you use the reporting functions.  In contrast, the systems that use centralized servers have to send all the data from the monitoring device on the boat up to their servers.  Both methods have plusses and minuses; with Blue Guard’s approach you have lots of data but remote monitoring when the boat has a spotty connection can be tough.  Right now I’m about 1,000 miles away from Have Another Day and it is taking about a minute to get just the login page to load. The silicon wiring gland with four holes, more would be helpful

Installing the system is pretty straightforward but does come with one anomaly that left me scratching my head.  The cases for the sensors are all water resistant plastic housings with a gasket to ensure water resistance and the silicon gland seen above for wires to enter the housing.  Each of the sensors requires somewhere between four and ten wires so the inclusion of only four holes in the gland is curious.  I was able to cut the gland between each wire hole to allow for more wires into the sensor but this does compromise the water resistance to some degree. 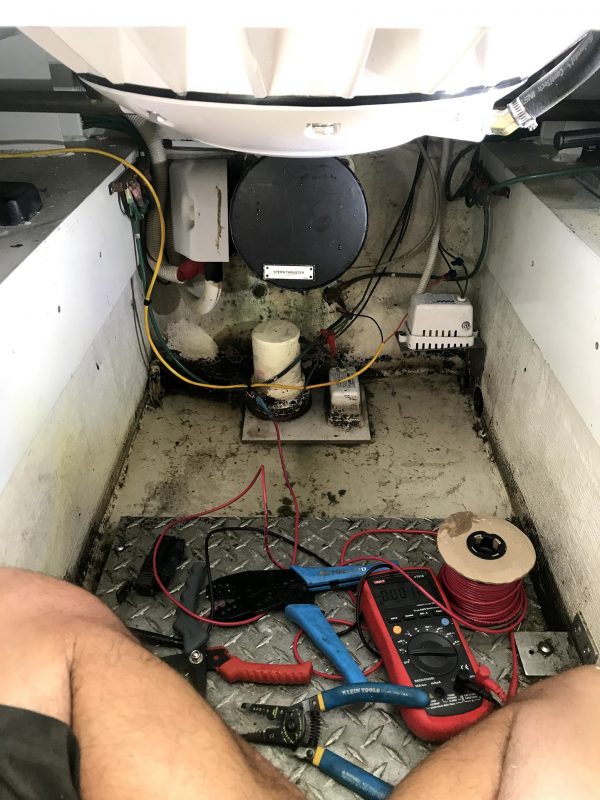 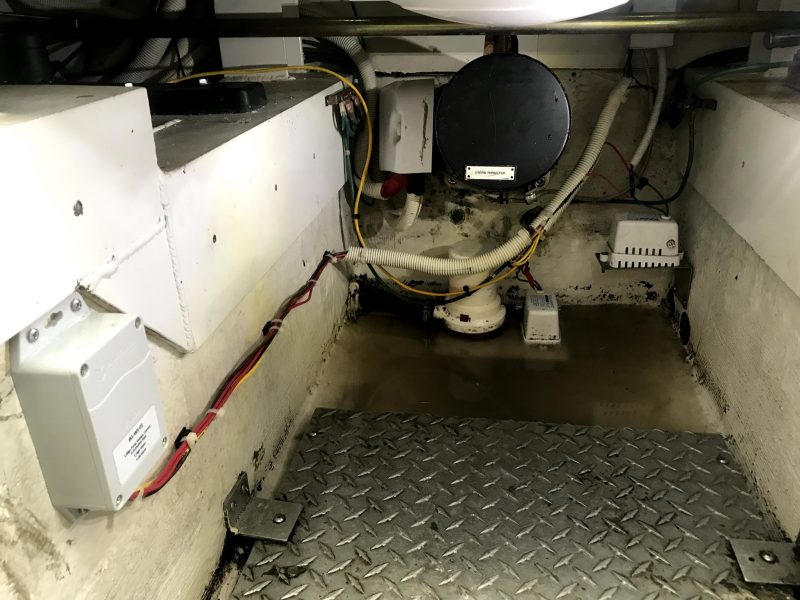 The rest of the installation was pretty straightforward (except for having to modify the wiring of my aft bilge pump, conveniently located UNDER the SeaKeeper) and definitely made easier by the wireless connection between the sensors and the gateway.  It’s worth noting that the manual suggests installing the gateway at a helm or near the electrical panel since the rest of my monitoring products are all installed in the engine room.  The gateway installation is as simple as connecting two wires for power and securing the enclosure.

Wireless devices on boats can be tough and Have Another Day can be particularly tough.  Carver built her with an aluminum grid system supporting the floor of the salon which is also the ceiling of the engine room.  From the gateway to the aft bilge pump sensor there’s about 30 feet of boat, the aforementioned aluminum grid, a bulkhead, aluminum fuel tank and lots of other stuff.   So between the obstructions and the silly amount of wireless gear running onboard wireless isn’t a slam dunk.  Blue Guard’s wireless system seems up to the task of providing flawless wireless performance in about 10 days of testing.

Blue Guard’s website emphasizes the BG-Link as a marine IoT device — IoT is all about collecting data from everyday devices — and the BG-Link’s data collection and reporting features are its strongest.  But, as a boat monitor there are currently some areas I think Blue Guard could focus on to improve.  The first one is the lack of location tracking and alerting.  In its current form, the system has no location information available to it and hence can’t perform any sort of geofencing or anchor monitoring.  But, I’m intrigued by the three terminals on the bottom left of the Blue Guard hat in the gateway labeled CanH, CanL, and Ground.  Those are CANbus connections which could potentially be used to collect NMEA-2000 data and hence open up a ton of additional sources of data.

Alerting is also not as well developed as I’d like.  Firstly, the alerts themselves are all sent via SMTP (the internet Simple Mail Transfer Protocol) which must be configured by the user.  While that’s how email on the internet is transferred it’s very unusual in this day and age to see those settings exposed to an end user.  Also, there’s no facility for sending separately formatted emails to SMS devices.  Instead, Blue Guard provides the email address of the major phone carriers email to SMS gateways (like [email protected]).  Blue Guard says they’re working on this area of the product to simplify and improve the user experience.  The second challenge with alerts is the need for further alerting criteria.  For example, the bilge pump monitors can be set to alert after X activations in an hour, but you can’t set an alert if the bilge pump run time exceeds a time threshold.  If a leak is big enough it’s entirely possible the pump will activate once and never turn off so there will only be one, very long, activation. One of the hallmarks of IoT is making data available about everyday objects and the BG-Link makes good on that concept.  The charting capabilities of the BG-Link are very robust and allow easy viewing of large time spans of data while easily allowing you to zoom right in on any particular time period you’re interested in.  Data is collected every 4 seconds so you can get very granular data on what’s happening.  Here you can see what looks to me like a momentary loss of shore power causing a large spike in battery current consumption followed by a few minutes of charging to return the house bank to 100% state-of-charge.  The graphing works well on a desktop and also on a mobile browser.

The BG-Link is seeing and collecting a ton of information and shows big potential.  From here, I think Blue Guard has a big opportunity to address some of the areas I mentioned and build on the very strong foundation they’ve built.  They’ve done a lot of the hard work and built a quality product with strong wireless performance, tons of data collected and great display of that data.  Now, I hope they will add a bunch of intelligence over the top of all that data and build easier, more in-depth alerting while adding additional sources of data including location and potentially NMEA-2000 data.