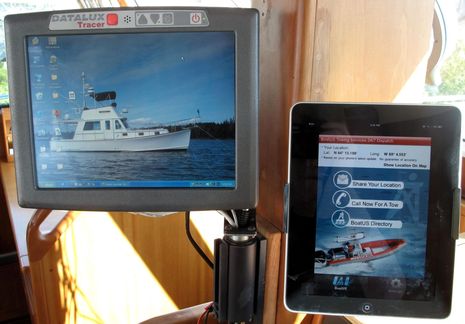 Gizmo is still ashore, but she shed her shrink-wrap this week and today I had a few enjoyable hours aboard tidying up and fooling with some new accessories. One is the handy mount holding the iPad up next to the Datalux police car computer (which apparently survived the winter aboard fine), but first let’s talk about the free and very clever BoatUS smartphone app showing on the pad. Some of the features alluded to in that link aren’t enabled yet, but its primary function — making an automated call for a tow — worked very well in my test…

I actually tapped the “Call Now For A Tow” button on my Android phone (because the iPad can’t make calls, though it can use the app to do things like email my location to friends). The magic was that when a BoatUS towing dispatcher took the call in Virginia, he already had my contact information and location on his screen. Once I’d explained that I was just testing the app for this article, I got to speak with VP John Condon, who explained how the system works and also sent me the dispatcher screen shots below.
When you first set up the BoatUS app with your membership number, boat name, emergency contact, etc., it creates an entry in an online database that’s associated with the number of the smartphone the app is installed on. Then when you tap that please-tow-me button, the phone sends a data burst containing your GPS location and database reference before dialing the call center. Of course, a boater doesn’t need to know all this; he or she will likely just be delighted that they’re quickly talking to a dispatcher but don’t need to dig out their BoatUS card and spell out their contact info and location at a time that might be tense and/or busy.
This strikes me as a perfect use of app-on-a-connected-phone-with-GPS technology, and I was glad to hear from Condon that BoatUS has all sorts of other app features on its development road map. Like maintenance and getting-underway checklists, safety alerts, membership management, launching ramp locator, and more… 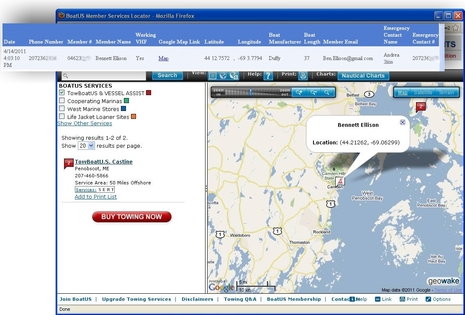 I’m already using an iPad for all sorts of accessory functions, and think I’ve found a good wheelhouse mount for it in the Pad Grip from Solveitstore.com. While the simple clip holds the pad tight, it’s fairly easy to snap one in or out. And that the tilt-and-turn ball mechanism has just the right amount of tension so you can position the pad with two hands but it doesn’t move around when you use it. Quite a substantial magnet holds the base to the fixed or suction-cup platforms shown — or to most any flat metal surface — and it may concern some boaters. I couldn’t detect any compass disturbance with the base about 20 inches from Gizmo’s steering compass, but definitely affects the iPad’s internal compass. However, I don’t see how that sensor is very useful to boat navigation because the pad is not fixed to the lubber line of the vessel. I’m not positive that the base won’t creep off that experimentally placed vertical plate when Gizmo is vibrating and pounding, but I’m pretty confident the Pad Grip would stay put on a horizontal plate, and I also think it’s well made and reasonably priced. Incidentally, I learned about this mount from the gCaptain, and I think he’s testing one himself. 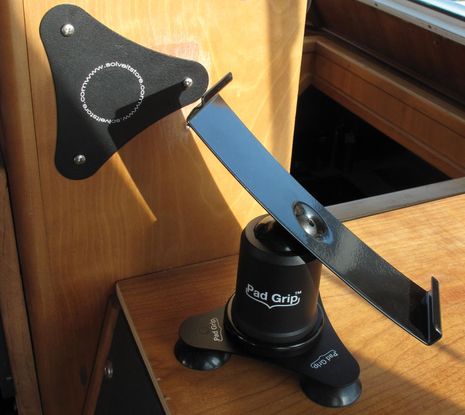