Bruce Ray, a true cruiser down 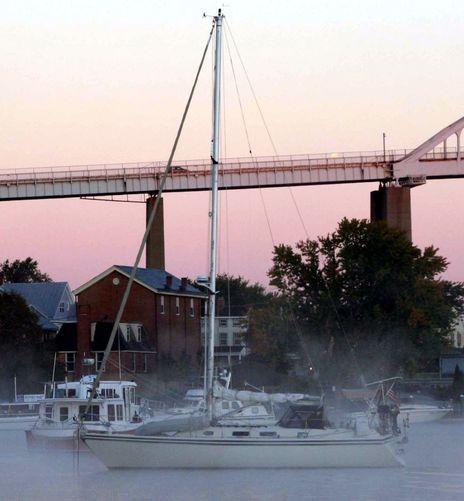 I never would have guessed that I would last see Bruce Ray on the September day that began with this misty dawn photo of his beloved sloop Zingara in Chesapeake City, Maryland. For a guy pushing 70 and burdened with damaged lungs, Bruce seemed phenomenally hearty. In fact, he’d just run solo for two long days and a night to get here from western Long Island, which meant he’d driven right through Cape May Harbor instead of resting there like Leonard and I had. But Bruce knew how to stop and smell the coffee too. Later that morning, the three of us old coots enjoyed a leisurely breakfast at the Bohemian Cafe and then walked around the harbor and admired the old-time engineering on display at the nifty C&D Canal Museum…

I met Bruce in the early 70’s when we were both trying to maintain and improve old wooden sailboats while also living aboard as much as possible, earning a living, and trying to sneak an occasional winter jaunt to the Caribbean. Bruce’s first Zingara was a fiercely narrow-beamed English cutter and I recall that his enthusiasm about that project hardly waned even after he’d removed so much of the joinery that it felt like being inside an elongated teak barrel. And while we both eventually built homes in the Camden area and spent decades without sleep-aboard-size boats, Bruce never gave up his love for sail. I believe he was a hotshot on the local J24 racing scene and once he’d succeeded with his construction business — I’m told he was an exceptional designer/draftsman and a great boss — his cruising dreams started getting real again.
If he’d made it, I think this winter would have been Bruce’s eighth straight in the Bahamas, where he loved volunteering at the Exuma Cays Land and Sea Park. Every year he’d sail back to Camden or leave the boat in the Chesapeake — where he’d grown up and still the family seat — and drive up. Either way a regular summer feature around here was a cheerful and nut-brown Bruce, a veritable poster boy for the cruising life. We talked old times and electronics — he much appreciated his little Garmin 545 and then the 740 that followed last summer, and was just about to add an AIS receiver or transponder — but mostly I liked to hear about his adventures and especially about his keep-it-simple and keep-her-sailing approach. Bruce was not a braggart, but clearly his experience and style worked. He inspired me, no question about it, both to put some miles on Gizmo and to enjoy cruising solo if I felt like it. And I bet I’m not the only one.
It was also Bruce who recommended wintering Gizmo at Osprey Marina and we were hoping to meet there in early November. But I was already back in Maine by the time he arrived and our last conversation was when he went aboard Gizmo and served as my intelligent remote camera for a few minutes. Thanks again, Bruce!  Apparently things went rapidly downhill for him after that. I understand that by the time he got to northern Florida he felt exhausted and thought he’d hurt his back messing with his anchor. Friends had to help him moor and get ashore. Then there was the damn cancer diagnosis, the medivac back to Maryland,  the second diagnosis just as bad, and finally the pain killers and the hospice. All bam, bam, bam fast!  Bruce Ray died on the day before Christmas, family by his side. I believe that many cruisers from Penobscot Bay to the Exumas lost a friend and an inspiration, and that we’re all hoping Bruce has found more good places to sail. 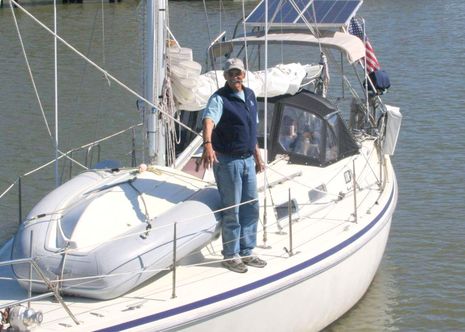 PS 1/19/2013: Bruce’s good friend Gregory Kontos sent a photo of the pilot whale skeleton exhibit that Bruce and other cruising volunteers built last winter at the Exuma Sea Park (like Mike and Angie Williams, who mention it in a comment below): 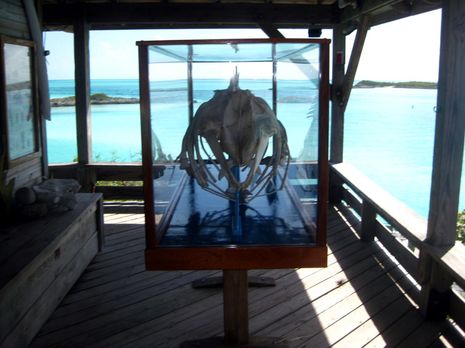 Greg also sent this shot of Bruce where he so liked to be: 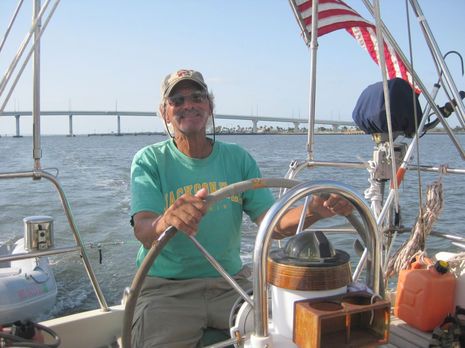