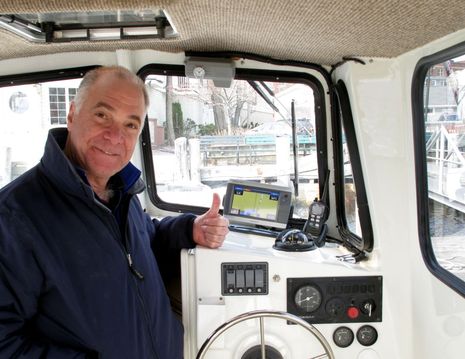 That’s my good buddy Jack aboard the 21-foot powerboat he’s named Buddy. The photo was taken a couple of Saturdays ago when he had just relaunched the boat after an extensive refit, and I’d like to think that Jack is indicating his happiness with my electronics advice. He’s a dedicated Garmin user — and the man responsible for the gorgeous all-Garmin helm I featured here — but he was thinking of going with a GPSMap 546 until I talked him into the 740…

Not that there’s anything wrong with the 546 — which is a lot like the 545 I once tested, with NMEA 2000 added. However, I think Jack was presuming that a small plotter was appropriate to a small vessel, and that’s a concept I’ve always questioned. Sure, financial and/or space budgets may mean that you have to settle for a small screen, but it’s not like you’re going to look at less chart because you’re on a smaller boat. In fact, smaller boats are often faster boats and so you need more chart to maintain the same situational awareness. And if you must have a small screen, here’s hoping it’s fast at screen redraws because you’ll be zooming and panning more than with a larger screen.
Besides, the 7-inch GPSMap 740 isn’t that much more expensive than the 546, especially given the touch screen ease and high speed redraws, and especially relative to the project (Jack had the little helm enclosed with some beautiful Johanson Boatworks glass work). Plus it would be easy to add a radar if, say, Jack or the next owner wants to use Buddy as all weather island commuter. Actually I’d recommended the 740s model as, again, the incremental cost is small and someone might enjoy fishing this boat one day. But Jack doesn’t take all my advice, and certainly his “ship’s clock” is entirely his own concept. He told me that he spent a lot of time at Walmart selecting just the right cheapo wristwatch to epoxy to the wiper motor. This is a case where the scale of the boat really does merit a similarly small screen; that watch is quite visible from anywhere in Buddy’s little cabin. 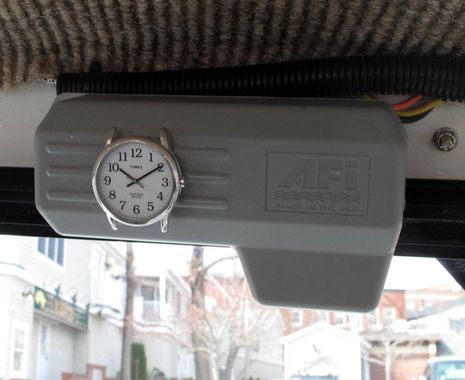 The boat, by the way, is a Pompano 21, purportedly modeled on a Pulsifer Hampton 22, a famous wooden production boat in Maine, and recently well profiled in Soundings by Eric Sorenson. I have a nice picture of Buddy 2011 somewhere, but not with me in Paris. I’ll add it once we’ve endured the very long day of travel we are about to begin. {Done!} 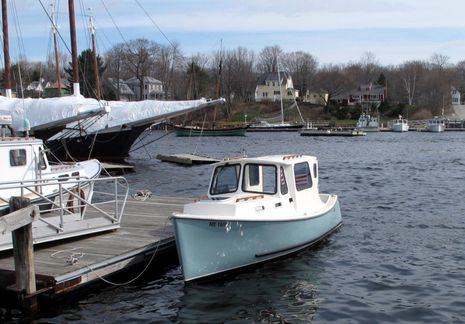