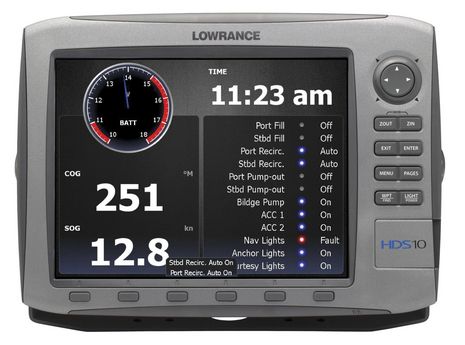 This HDS-10 is showing off Lowrance’s new relationship with Digital Switching System’s distributed power system.  While the interface is NMEA 2000, I think DSS uses its PowerGate 2000 gateway for this purpose, instead of using N2K for its internal network.  But that may not matter, as I understand that DSS uses standard N2K PGNs whenever possible.  In fact, I’ve seen Krill Systems software working with its gateway and switches just fine.  But that was just a demo, and I suspect that it will be a long time before we see easy, full-featured integration between DP and other boat systems, except by partnership or design…

For instance, I understand that the BEP CZone system discussed earlier this week uses proprietary N2K messages, so the relationship with Simrad may be quite exclusive.  OctoPlex also uses N2K for its internal networking, but to my knowledge the only “third party” software that interfaces fully with it is N2KView, developed by sister company Maretron.  (Whose own DP products, presumably aimed at smaller vessels than OctoPlex, remain unannounced, though there are lots of reasons to think they’re in development.)  And while MasterVolt’s new MasterBus N2K gateway (below) enables some interesting features, they don’t include the “wow” vessel control screens promised with the NSE/CZone partnership.  My point is that distributed power is tricky stuff, with significant liabilities, and doing much with it on mixed manufacturer N2K networks may be challenging.  But that issue is probably trivial compared to what can happen if the distributed power system itself goes bad, or its manufacturer goes belly up… Last week ED&D, developers of E-Plex, apparently notified its various boatbuilder clients (like Princess and Coastal Craft) and value added resellers (like Bass and Precision Race Services) that E-Plex production would cease in 30 days.  Most of my phone calls have gone unanswered, but I did talk with a glum-sounding ED&D manager who acknowledged the notification, though adding that there was “more to the story.”  I’m still waiting for that, and I’ll bet that the folks who own E-Plex systems are particularly anxious to know what’s going on.  What about spare parts and warranties, for instance?
ED&D,
whose site still looks
very much alive, is actually a tiny company that’s been through a rapid
succession of ownership.  About the time it developed a marine system, it was acquired by Airpax, which
was itself acquired
by Sensata two years later.  A year later, in mid 2008, ED&D was sold to the Sorenson
Group, which is also known as Wes-Garde.  I don’t know if Wes-Garde is giving up on ED&D altogether, but it does seem obvious that it takes deep pockets to build a distributed power brand.  There’s a lot to developing the technology, and winning the trust of boatbuilders is a long, slow process.  And what if your system causes problems, as may have happened with E-Plex on certain Sea Rays?  Did law suits precipitate ED&D’s surprising announcement?
I saw an extensive E-Plex system on the stunning Mala Conducta last summer, and I’ve heard that the owners are happy with it, despite some teething pangs.  But they might be quite upset to learn that they now have an obsolete product controlling most everything on their boat.  Below are just two of gosh-knows how many E-Plex modules on the vessel.  I guess I’d be stock piling all the spare modules I could!  And if this system has to get replaced, not even the network cable is reusable because E-Plex was the only two-wire one on the market.  It’s not a good situation, though I’d like to think that all the other distributed power companies mentioned here do indeed have the resources and commitment needed. 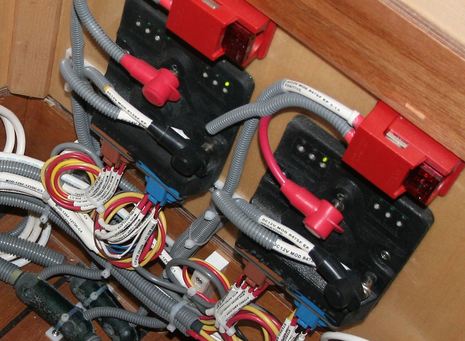