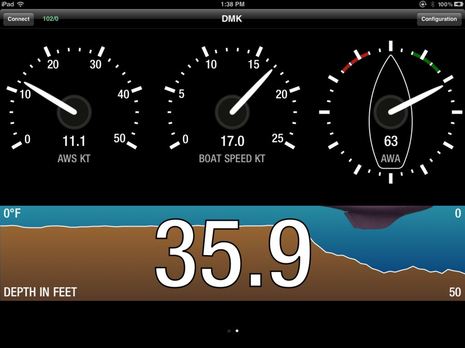 Even if it only happened in my basement lab, it really is wonderful to see a boat’s sensor data arrive wirelessly into an iPad app, where it could be used and displayed in so many ways. The instrument screen shown above was developed by the same DMK Yacht Instruments folks who build the WiFi box that got the data there (first discussed here in December). The wind, depth, and speed numbers went into the DMK gateway in NMEA 2000 format, but they could have been in NMEA 0183 or SeaTalk, or a mix of all three. In fact, I’ve tried all three source formats with some success so far, but I’m frustrated because the DMK app — meant mainly for configuring the box, I think — only displays the values shown fully, and no other app I know of yet takes full advantage of what the box can do. Lets hope some developers start paying attention to what’s possible here!

My test setup below may look scary but I’m using every option available on that rainbow ribbon cable coming out the DMK box at left. Starting at the top (white) junction box, the upper right cable has four NMEA 2000 wires supplying power and data. Then there’s a SeaTalk data cable I can connect to the set of Raymarine ST40 sensors and displays that I first used to test Ray’s ST-to-STng converter. (I’ll show off that rig soon as now I’ve got it accessorized with a fan for wind and a water tube for depth, and I’ve been also been using it to test the ability of the new i70 instrument display to understand SeaTalk data.)
At any rate, the black junction box connects the DMK’s two NMEA 0183 ports with the Tacktick 0183 Interface and a SRT AIS receiver (from before the latest generation). I won’t go into all the N2K data types and flavors I can put into the DMK box, but let’s just say that I’m ready to test some marine apps that are programmed to receive data from a boat!… 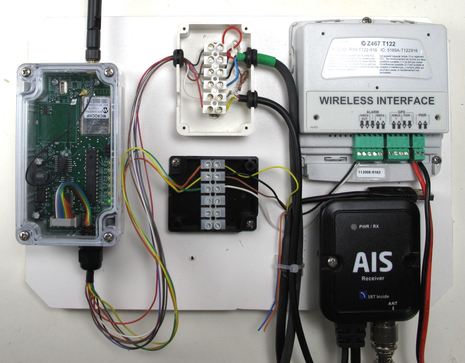 But there’s the rub, right? So far, iNavX has pioneered the boat-to-app navigation relationship (with Maretron on the systems side), but its developer Rich Ray has to sleep sometimes. And whereas the standards for putting 0183, 2000, and ST onto Ethernet are slim to none, he has to program iNavX for each kind of bridge, at least to some extent. I am impressed that the NMEA 0183 wind data coming from the Tacktick via DMK does show up in iNavX, and I suspect it will show most 0183 data (though I’m having trouble with AIS). But the gibberish seen in the TCP/IP window below is misunderstood SeaTalk data, and I think it’s quite reasonable that Ray doesn’t intend to support NMEA 2000 via the DMK box until he sees if all his recent work getting iNavX to understand N2K from the Chetco SeaSmart box(es) earns some “traction”.
I’m very close to testing iNavX with SeaSmart, and have high hopes, but isn’t there room for lots more developers here? For one thing, the DMK box has valuable configuration and data analysis features I’ll go into in another entry. And I think that Navico’s recently announced GoFree plan to make all its system data available to third party apps via WiFi/Ethernet should be a real motivator for developers to get going now. Maybe I’m obsessing on the value and future of connecting marine electronics to mobile devices, but couldn’t all charting, racing, weather, and system monitoring apps benefit? And apps I haven’t even imagined yet?  Your thoughts please. 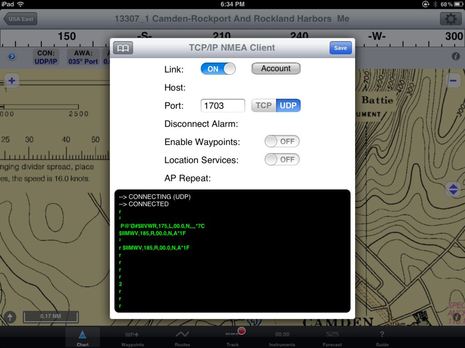